The Queue: On cue, we’re queuing for the Queue 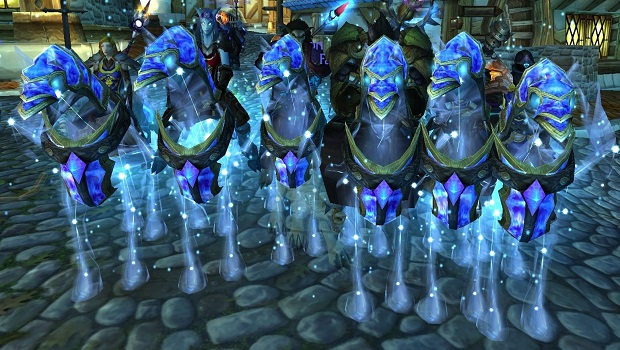 I honestly don’t know what this is, but Scott told me I should link it. Happy anime Friday, everyone.

*whispers* it's taken me years of XIV indoctrination but I've officially been converted into the opinion that WoW would be better if it got rid of talents & half of the specs and instead focused on building internal class complexity via rotations & cooldowns.

Q4TQ: how would you feel about talents being outright removed?

Much crazier Q4TQ: how would you feel about entire specs being removed from the game? Would you welcome the idea of just playing a “Hunter” again, focused on shots and beasts and traps at the same time, equipped with both ranged and melee weapons — and that would be what all hunters are, with the full toolkit?

Druids are a great example of how removing customization via specs could be problematic. Originally Druids, like all other classes, had three specs. Feral was mixed between cat and bear abilities, making for a muddled spec that only offered half as many options for your playstyle as other specs, so it was eventually split into Guardian and Feral specs. Reverting to three specs — much less zero — would really be a wild change for Druids, who would have nine million buttons.

I actually like the current BFA system where you pick a specialization and you get certain abilities key to that specialization. I like the Shadowlands system better, because it’s unpinning some core abilities to let all specs feel more like a unified class.

What I don’t like with the system, is the actual talents. Blizzard seems very happy with the current seven-tier talent system, which it hasn’t significantly iterated on since it was introduced. Talents on each tier can be significantly unbalanced, there are numerous junk talents that are nearly never worth taking, and it heavily favors a single cookie cutter build — with minor occasional variations. There is no progression. There is no advancement. There is no change. It is a static system that offers little gameplay interest.

Instead, Blizzard seems set on putting systems that provide power growth and customization into single-expansion mechanics. In Legion, it was Artifacts. In Battle for Azeroth, it’s the Heart of Azeroth and Azerite Armor. At the end of the expansion, the system goes away and we immediately lose a lot of power gains. It feels bad. Every expansion they do this it feels bad.

At least at first. And then you start gaining power in the new expansion’s system and the cycle repeats — you get all sorts of interesting new gameplay customizations that you enjoy, and at the end of the expansion, they’re gone forever.

I’d like an advancement system that lasted longer than a single expansion. Something that let us customize our characters towards certain playstyles — Feral or Guardian? Single-target or AOE? HPS or DPS? — and advance through. Like talents, the system would change, get updates, be rebalanced. But instead of being a wholly static system — seven tiers of talents forever — it would be some form of progression that we would earn while playing through each expansion.

But after so many years of talents as they are, I don’t see any major changes on the horizon.

A recent interview mentioned that expansion threats have to be stronger than titans to be believable, or some such word, and I disagree with that

The last final boss we fought without outside help was Archimonde. He was strong, but also once died to a bunch of wisps.

Sargeras got imprisoned by his fellow Titans. N’zoth got hit with a laser made out of a Titan’s soul energy (and may not even be dead).

While I do genuinely enjoy the cosmic exploration and learning more about it, I don’t think players need to be fighting those cosmic threats personally for it to be a threat. Some people thought Garrosh and the Iron Horde was unbelievable after we fought the Lich King and Death Wing, but we got help (from every spirit in Frostmourne for LK and the Dragon Soul for DW) with those, and even the Iron Horde would have been a threat if we didn’t take it seriously and stop it.

Just because we’ve built stronger and stronger bomb-resistant bunkers or bullet proof vests doesn’t mean tripping on the stairs can’t kill us. From a story perspective there aren’t stats in life; even if your character has been part of the army that wiped out huge swathes of threats in the past they could still have an unlucky day and get Vol’jin’d.

I’d be perfectly happy with the Jailor just being a Deathwing-level power, honestly.

This is a significant problem with a lot of long-running narratives — books, movies, video games, you name it. Every time we defeat a big bad, the next one has to be bigger and badder. To keep the dramatic tension, the stakes have to be higher and higher and higher. Eventually it can get pretty ridiculous.

Yes, of course, in practical terms even the grandest hero of Azeroth could trip over our own feet and break our necks tumbling down the stairs. But in narrative terms, that’s not very satisfying. (Just as Vol’jin’s random death was unsatisfying.) We can’t go from destroying gods to fighting a dragon without it feeling like something we should maybe be handing to the interns. Even if the dragon is a really tough fight, it doesn’t work for the narrative: last expansion we were god-killers, but now we’re wiping hundreds of times on a single dragon?

Unless there’s a narrative reason why our powers have been depleted, it makes for an unsatisfying story. And so we’re stuck with this cycle of power creep.

QftLatQ (Question for the Liz and the Queue): Does anyone remember when reforging was removed, how they justified this by saying they wanted gear to be less complicated, so you could simply equip a piece when it dropped, knowing that a higher ilevel would automatically be better, without having to sweat the details.

Fast-forward to now, where we have Azerite traits, essences, corruption – Shadowlands already looks like it’ll have similar mechanisms – and rather than just having to keep my stat priority in mind, I actually have to sim every potential new piece of gear to find out whether it’ll be better than my current one or not.

Did they officially take back that “simplify, simplify” goal at some point, or can we count this as a spectacular fail?

Blizzard has never officially taken back their “simplify, simplify” goal. They just announced the goal and went on creating complicated systems that required you to run sims to know if a drop was an upgrade.

I’m glad not to have caps and breakpoints that required you to carefully reforge every piece of armor so you got just enough — but not too much — of each stat, but BFA gear feels as bad as ever, just in a different way. Now I have to measure the Azerite Trait breakdown of each piece, and some Traits are so powerful (or so weak) that it will be 20 or 30 ilevels before replacing them would be a performance improvement. Dang, does that feel bad.

I feel like Blizzard doesn’t want systems to be this way. But at the same time they come up with ideas that they think are really awesome — but are also really complicated and encourage this type of play, where an upgrade may or may not be an upgrade.

At this point, I think they just need to add some kind of reforging back to the game. Yes, it added needless complexity. Yes, it meant you would almost never immediately equip an upgrade. But Blizzard keeps adding gear systems that add that same frustration, except you can’t customize your way out of it. Instead you just take that ilevel upgrade and scrap it, which feels worse than having to run a sim and take a trip to the reforger.

QftQ: During the post-Shadowlands time-skip the whole of Azeroth is going to learn to appreciate the art of song. Songs about the Champions lost to the afterlife, missing for years since the fall of Sylvanas. Ballads of their heroism in fending off the Legion, the betrayal of Hellscream, and many other stories. Finally, after our time-lost era, our Champions will return from the Shadowlands victorious, over whatever evil we are going to face, to discover a new kind of Champion protecting Azeroth.

IT CAN HAPPEN OK?! LET ME HAVE THIS!

As Red pointed out, Ion recently said that we were taking the time skip thing too seriously. It really sounds like we aren’t going to have one.

But we should still get Bards. Even without a time skip it’s going to take a while to sort out whatever’s wrong in the Shadowlands. Maybe that’s when Bards start working on ballads about all of our past acts of heroism, working on their musical skills for when they’re finally added to the game.

It can happen. Probably. Possibly? Maybe.

That’s all for today, everyone. Do your best to have a Good Friday and a good weekend to follow. Tell your pets and your friends and your family that you love them.

And hang in there. Tomorrow’s another day.