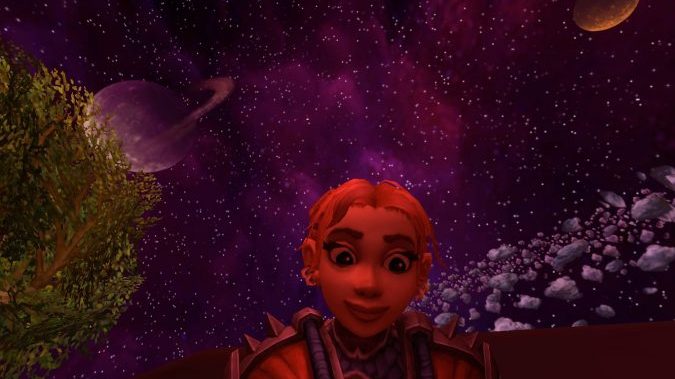 Somehow Friday sneaks up on me every week. Every week.

According to comments on the article Liz Patt wrote, I’m the only person in the world who enjoys Horrific Visions.

There was a lot of good discussion on this, and Jonathan made a really good point about Horrific Visions: “I feel like a lot of ppl tried them once or twice and gave up, which is worse considering the first time is suppose to fail unless u are real lucky.”

I feel like that’s the crux of the problem: it starts out being really hard. And by doing that, Horrific Visions set themselves up for failure.

Usually, Blizzard games follow the credo “easy to learn, difficult to master.” But Horrific Visions are hard to learn and hard to master. The first time you go in, without much (or maybe not any!) Titanic Research, it’s really tough. You don’t have many of the things that help with Sanity loss yet. You may not know the map well. You may not know the encounters well. You may hardly know it at all, and there’s not much room for error.

I know that I’ve gone in more than once and not been able to kill the first boss and walked out with nothing to show for the attempt, which is really frustrating.

I think I could have — and would have — fought through that frustration and learned how to beat it if it were easy to try again. But it isn’t easy. It requires a great deal of currency grinding to earn the entry fee, so when you fail you can’t always say “I see what I did wrong there, I’ll go back and try again and fix my mistakes.”

Instead you may have to go out and do several Assaults and a raid to earn Coalescing Visions to buy Vessels to get into a Horrific Vision. And because there are only so many activities every week you can do to get them, sometimes there is nothing you can do to run another Horrific Vision except wait.

So Horrific Visions are hard. They’re designed to be hard, and that’s not necessarily a bad thing — challenging yourself and learning how to do better can be really fun. It’s one of the things I enjoy most about raiding: repeating an encounter over and over, analyzing my performance, playing with gear and talents and rotations to figure out the best way to do things, and eventually succeeding. My favorite fights are the ones I’ve had to run so many times that healing them is just muscle memory — those are the fights I’ve had to spend a lot of time thinking about and refining my gameplay for.

That’s something I could conceivably have enjoyed about Horrific Visions, too.

But I hate grinding for Coalescing Visions to get into Horrific Visions in the first place. And when I may only have one chance to run a Horrific Vision (because I only have so much patience to farm currency), failing feels really bad.

I really like the idea of difficult content that provides new challenges, particular content that you can do solo, without relying on anyone else. (One nice thing about Visions is definitely that you can do them solo, even though it’s almost always easier to do them in a group.

But by giving them a high cost of entry and making them difficult to get started with, I honestly lost my enthusiasm for them before I got very far. I haven’t run a Vision in months, even though I have a couple of Vessels just sitting in my bags.

Particularly this late in the expansion, all I can think is why bother? I’ve killed Heroic N’Zoth. I’m wearing level 460 gear. Why frustrate myself by spending hours farming currency followed by a speedrun through a literal nightmare? Only to have to do it again. And again. And again.

I think without Vessels, I would probably be having fun learning Horrific Visions and doing mask runs for the fun of it. As it is, I’ve done the bare minimum to get my cloak and have no interest in going back.

Covenant question – My wife and I co-op our first characters in an expansion. Once we hit end-game, and each pick a covenant, do we need to pick the same covenant to stay on the same daily/world quests?

If we picked different covenants, I wouldn’t mind having some different quests, but having different daily patterns would really put a downer on things.

And I’ll offer one small, additional reason to stick to the same Covenant. Each one has their own fast transportation system around their zone — useable only by members of that Covenant. If you’re in different Covenants, neither of you are going to get use out of those when you’re grouped, which is certainly an inconvenience before flying arrives.

Which reminds me, I need to chat with my wife about which Covenant she’s thinking about joining…

QfLiz – If Blizzard wrote you and said they would like to design a new mini-holiday in your honor, what would Elizabeth Harper Day consist of doing?

Petting the doggos — and other doggo-adjacent creatures — of Azeroth. There would be a quest to travel the game and pet everything that’s pettable.

Q4Liz: where are our Artificers in WoW?

I’m pretty sure we’re talking about D&D’s Artificer class here, which is focused on various sorts of tinkering. They can imbue objects with power. They can build robot companions. They can construct turrets. They can create fantastic sets of armor.

It’s a concept that feels very akin to the tinkering of Warcraft’s Goblins and Gnomes, the machinations of the Engineering profession, and the entire existence of Mechagon. And I’ve seen a number of pitches for a Tinker style class that have powers along those lines, but perhaps with a more Warcraft flair.

The problem, I think, is that WoW already has a spread of abilities that would fit a Tinker, and the class would, by necessity, cannibalize some of the weirdness that makes Engineering fun. It would be similar to what happened when Demon Hunters were added, taking some of the skills and flavor from the Warlock class when Legion focused on “class fantasy” that redefined what Warlocks were while creating Demon Hunters.

Is there a role for an Artificer or Tinker style class in WoW? Absolutely. Will Blizzard ever make one? I’m not sure. The class really needs a concept and playstyle that doesn’t heavily cannibalize on other game elements, and I think that could be a problem. They’ve ignored that problem in the past, but there’s no guarantee they’ll ignore it again.

But I will continue to live in hope for Bards and Tinkers to join the game. I may be waiting for a long time, but I’ll keep hoping.

Q4TLizQ: What do you know?

I know there’s a heck of a lot that I don’t know, but maybe that’s the first step to knowing it.

Have a good weekend, everyone.