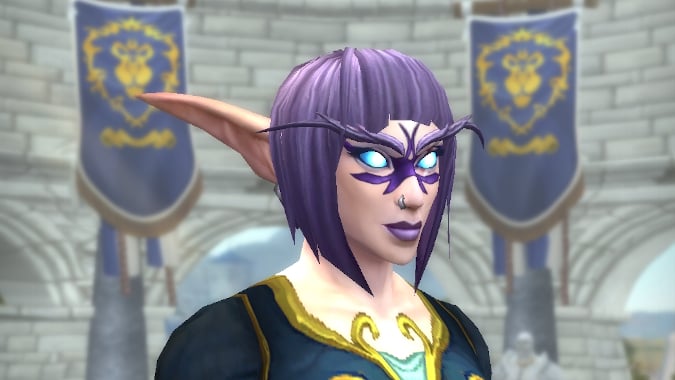 We’ve been in quarantine for nearly five months now, and it’s at the point where I have to talk myself out of cutting my own bangs on nearly a daily basis. I told myself I would wait until the salons were safe to visit, and I know if I do it myself I’m going to really mess them up, but honestly, if I cut them they would’ve grown out already. Twice.

This is The Queue, where you ask us questions to distract us long enough to steal the shears while we answer.

Q4TQ: what was the first Legendary you got in Legion? Was it a good or a bad one? Was it useful to you?

It was those mail pants that heal if you stand still. Even though for most people they suck, as an incredibly casual BM Hunter, they saved my bacon on a near-daily basis. I actually really, really miss them to this day, when I’m playing the Shadowlands beta. “Guess I’ll just die then,” is a pretty frequent refrain, and it’s not because of outsized damage, it’s because I forgot I don’t have those pants, or that Azerite trait that lets me stay away from mobs for a slow trickle heal.

Q4tQ: I’m not a huge alt player like some folks. But I do use altoholic to keep track of items on all of my characters. Like one character has pet battle items, another has BOE gear, a different one for mats from each of the past expansions, etc, etc. What do you think about having something like the altoholic feature built into the general user WoW interface? If they wanted to limit it they could require you to visit the bank.

That seems like a whole lot of functionality — and server churn — when I would guess that a majority of the playerbase doesn’t really need all that. Heck, I use a single bank alt per faction, since most of the important junk is BOA these days. If I’m finding that her bags are overflowing to the point I may need a second mule and therefore much more robust organization, frankly, it’s time to just sell stuff off, especially older expansion mats. I do not need five BOA cloth helms from the Timeless Isle. Marie Kondo it.

I use an Auction House addon that lets me know when I mouse over or search something that my main has a dozen of this geegaw, an alt has a couple, and my mule has hundreds. That’s really all I need.

QftQ: What’s the worst place on Azeroth to try to get some sleep, do you think?

Ironforge must be oppressively hot because of the massive lake of molten rock and slag at its center. It’s also clearly intended to be a place to sleep, since it’s an active capital, but I’d imagine there’s non-stop metallic clanging from the army of smiths and stonecrafters no matter where you go in the city. Near the center is the worst, but the way sound carries through rock — and all the beds seem to be constructed of rock — even if you try to bed down in The Forlorn Cavern, it’s going to vibrate through your skull as soon as your head hits the slab that you’re supposed to pretend is a fluffy pillow.

And then the Deeprun Tram rumbles through.

After about a week I’d move to Westfall. Even with the potential for getting murdered by brigands in my sleep, it’s probably more restful.

Q4tQ If you could ask Matt Mercer any question, what would it be? And what voice would you want him to answer in?

I don’t know that I have one specific question for him, but I would love to interview him about the meteoric rise of Critical Role as a whole. It has to be a weird feeling that, although you do have a very specific skillset that’s all but tailor made for a format like a D&D demi-improv show, you’re kind of just doing what you always did for fun with your friends — and apparently it’s really popular and lucrative somehow. I get a small taste of that feeling every time Christie Golden hits like on a post I wrote, and I can’t imagine the combination of small, heart fluttering satisfaction at being recognized for something you’ve worked so hard at, and the deep wrenching in your guts that this cannot be real, when they do things like the live show in Chicago.

As a creative, I’d also love to ask him about his process and the tools he uses. I know he usually has full printed character sheets and notes for everything in a huge binder during production, but that’s not necessarily the process per se. For me, there’s a huge difference in comfort level between the things I’ve drafted out sitting at my desk with a cup of coffee and my mechanical keyboard, and things I’ve drafted by necessity on my phone in the dark with Google Docs or planned in Trello (because automatic cloud save) while I’m waiting for my son to go the pirate ghost to sleep. For reference I usually start writing The Queue responses in Docs, c&p to Notepad to strip the weird formatting Docs adds, then slap it in here. I also edit exclusively on my PC. I would guess — pandemic seclusion aside — Matt probably uses some similar tactics to get stuff done, because from my understanding voice acting is similar to theatrical or film acting in the “hurry up and wait” sense.

I would imagine he’s already been asked all this many times by interviewers far more skilled than I am — I’m neither good nor experienced with interviewing, or um, really interacting with adults at this point. Asking people what their favorite dinosaur is acts more as an icebreaker for the preschool set than it does for professionals, believe it or not. And heck, as a fellow nerd that might be a fun avenue to discuss, too — how do you take your awkward nerd self and make yourself such a charismatic, beloved figure?

All these questions could probably be summed up with, “No, really, how do you do that.”