The Queue: My Hunter is still in hot pants 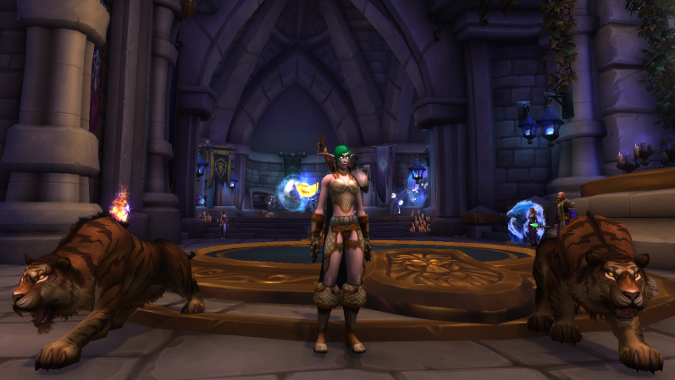 Nine levels to go to 120 on the Hunter. I’m completely rubbish at playing her. And she’s wearing chainmail hot pants.

This is the Queue. Seriously, hot pants.

Q4tQ (Rossi if Anna doesn’t steal it) – Blizzard comes to you and asks you to design the 4th spec for Warriors. Do you Gladiator up with 1 h/2h & Shield for DPS, create a 2h tanking spec (aka DK’s), or something else entirely?

I would do this.

Actually, if I were given complete freedom, I would redesign the entire class. Each spec would have two stances, a balanced stance and a dedicated role stance. Protection would be gone, replaced by Dreadnaught — extremely heavily armored, weapon and shield, tanking/DPS with Gladiator baked right into the spec. They would have Defensive and Gladiator Stances, aimed at tanking or dealing damage using their weapon and armor to deal out injury, so their moves would be build around deliberately crashing themselves into opponents and using their armored bodies as weapons, as well as their weapons and shields. Would tank with Blocks and Parries and would have the highest armor of the four specs.

For Arms, that’d be gone too, replaced by the Juggernaut — heavy armor, 2h weapon, can tank by using the 2h weapon to parry and their armor to block.  Would have the highest parry, would use Defensive Stance for tanking and Battle Stance for DPS/offense. All their moves would be based around precise control of that massive 2h weapon.

Barbarians? Well, you guys have seen Diablo games. Titan’s Grip, leather armor, and a boatload of health to basically soak or ignore incoming damage. To compliment this style, I’d straight up steal D&D/Pathfinder‘s idea of damage resistance when Enraged and an armor modifier that would make leather as good as plate for them. They tank through sheer stubbornness.

That is what I would do with Warriors.

SPENCER MORGAN WANTS TO UNDERSTAND THE VICISSITUDES OF THE TROLLISH HEART

Q4tQ: why is Talanji most mad at Jaina, when Genn was actually in the room with Rastakhan died.

Jaina was the one who peered over the edge when Talanji looked up, the first Alliance face Talanji saw on her way to discover her father was dead.

Jaina was the Lord Admiral of Kul Tiras, the one whose ships invaded Zandalari waters and blew up the Zandalari fleet with a weapon of sabotage. Many of her people died without even being able to open fire on their invaders.

Jaina was the Alliance Mage who nearly recaptured Talanji when the Horde broke them out of the Stockades. If not for Zul of all people, Jaina would have walked right over the Horde (including Thalyssra, who despite being 10,000 years old is simply not in Jaina’s league) and plopped Talanji right back into a cell.

Every time Talanji has seen Jaina, it’s been bad for her. I’m not surprised she hates the woman. They’re both leaders of state, each power is seen as the balance against the other, and so far Jaina’s either been a threat or a confirmed menace to Talanji and her people. Sure, Genn was there, but he’s the king of a homeless people. Jaina rules a direct threat to the Zandalari, that’s proved it will do anything to win on the seas.

JALAMENOS ASKS ABOUT WHY WE PLAY OUR MAINS

Q4tQ: What drew you to play your current “main” class in WoW?
Did the fantasy of it appeal before you even tried the game?
Had you watched someone else play the class and wanted to try it yourself?
Or did you try multiple classes before settling on one?

If you don’t have a character that you consider your “main”, apply the same question to the first character you got to max level instead :)

I started World of Warcraft as a Paladin in vanilla, and got to level 20 before I realized two things. One was that they were nerfing Seals and my Paladin’s damage was about to drop like a stone (This was, I want to say, late November of 2004) and the second was that I went into Deadmines and got yelled at for not healing. I didn’t know Paladins were considered healers in D&D — they certainly weren’t in D&D, which is what I was used to.

So I decided I’d reroll. I tried a few other classes — Hunter, Rogue — but none of them clicked. I tried the Warrior as a last try before quitting and telling Julian I didn’t like the game, and for 9 awful levels, I suffered through that Warrior and hated every second of it.

And then at level 10 I got Charge. Back then, we got Charge at level 10. And Charge won my heart. I love Charge, I loved Warriors, and despite a few flirtations with other classes, I’ve never really looked back. I’ve switched mains several times, but the new main is always a Warrior, save for the beginning of Battle for Azeroth where I leveled my DK to 120 first, raided on it for a month, and then switched back to Warrior and never looked back.

That Sinrunner made me realize that while I have dozens of mounts, I almost never use most of them. My warlock uses the Headless Horseman’s mount, exclusively, ever since it dropped for me. My paladin? The Argent Warhorse or Argent Hippogryph only.

Q4TQ, Do you lock in where certain characters only use a specific mount or mounts or do you tire of looking at the same mount after a while and change them out?

Most of my characters just use the random mount feature, since I have my top 30 mounts fsavorited and that’s plenty.

My human uses Mim’s Head because he’s the one it dropped for.

KALCHEUS HAS NEVER PRODUCED ANY EVIDENCE OF FLUFF

Q4t PTR Testers: Can you transmog Artifacts across specs?

Nope, not as yet.

Okay, that’s the Queue for today, but I’ll be back tomorrow, so if you have any me specific questions, it’s a good time to ask them.

Blizzard Watch is made possible by people like you.
Please consider supporting our Patreon!
Filed Under: Chainmail Hot Pants
Advertisement