The Queue: Crossing things off 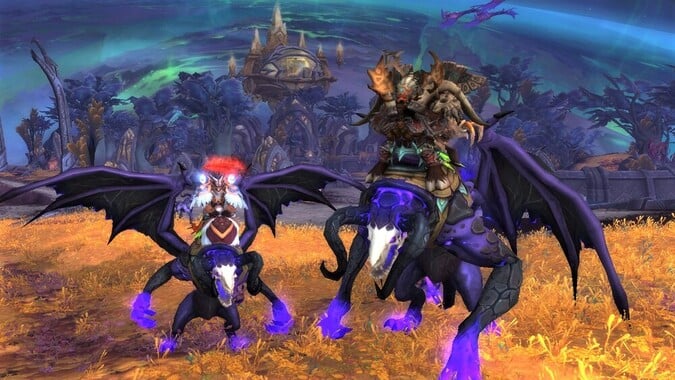 Over the weekend I finally went and tackled the achievements I was missing from my Glory of the Argus Raider. Turns out that they weren’t that hard with our gear now. I had more trouble making it past Imonar the Soulhunter’s extremely long Sleep Canister ability than most of the bits for the achievements themselves. He likes to reapply it like a jerk before the first one has even fallen off! Well, aside from Aggramar’s — his achievement took a few tries.

I’m glad that my friend convinced me to come along because now I have that beautiful shadowy demon dog. It did make me think though. We run around collecting these demonic and otherworldly mounts all the time, what if that’s secretly part of the Old God’s plan? Soon they’ll have an army of Void beasts just waiting to drop unsuspecting riders to their doom.

But enough about what the dog may or may not be plotting. It’s time for — the Queue.

WHEN JAXDADDY WAS A YOUNG BOY

QftQ: Besides these grand narratives of life and death and war and gods old and new, what kind of stories would you like to hear in WoW in various media? I would like to know about the people left behind. The conscripts and warriors and paladins who did their time and found some happiness where they were at. Like a farm in Pandaria or a homestead in the Grizzly Hills or, indeed, a garrison on Draenor. You?

“Life after the Legion.” The title could use some work, but we could check in with the various Orc clans and hang out with Exarch Yrel. Maybe throw in a forbidden love story between a Tauren ship captain who stayed behind and their Elven love from the Alliance garrison. Politics, love, some swashbuckling. This is practically writing itself.

Ooh, how about a slice of life series about the Kirin Tor teaching young magical adepts in the ways of being Mages. We’d get some more details on the workings of magic on Azeroth, and some magical hijinx as the senior class played pranks on Archmage Khadgar. Throw in a bucketful of awesome sound effects for the schools of magic, and special guests like Jaina and Thalyssra and you’ve got me hooked.

I hope that someone with the power to greenlight these was paying attention. I’d love to be able to listen to stories about Warcraft — while I was leveling my next character.

VERDIGREE’S FATHER TOOK THEM INTO THE CITY

This is Verdigree, Undead mage, just read your Nathria weapon update, and realized I have a mechanical numbers question. How does having a main and off-hand versus a two-handed weapon compare? Do they equally count towards average iLevel? It’s definitely more hassle to get both items, so is/should there be a mechanical benefit?
Yours, Verdigree

I’m stealing a podcast question — don’t tell Matt and Joe. This one will just be between us.

There are small benefits to having a main-hand and off-hand over a single large weapon. For some classes like Shaman, Warrior, and Paladin that can use a shield they get the benefit of having that extra armor from equipping it. For classes that dual wield weapons, they get an extra enchant slot. Plus there’s the extra benefit of being able to aim for the stats you want on both items. Maybe you only need so much Haste and Mastery, so you can aim for a piece with higher Critical Strike on it to round out one of your lower stats too. Which might be more important with the changes to stat scaling coming in Shadowlands.

Right now in Battle for Azeroth the offhand is also another slot for Corruption. While I can only ever have eight active corruption effects on my Guardian Druid who uses a Staff/Polearm, that Protection Warrior has a ninth slot for even more N’zoth goodness. Which I would love to have so I could add another 12% Versatility into my set. That would bring my set up to 54 corruption, which is a little higher than I might want, but it would be worth it for the extra protection and damage from all of that sweet sweet Versatility.

You are right on it being a hassle to get both items though. I don’t miss having to do that.

Queue For Any Queue: Has anyone on the Alpha seen if fishing poles can finally be transmogged? In my opinion, the Artifact Pole from Legion is quite the Must Have item for anyone that does fish for any reason, but it is damned ugly. I prefer the previous King of Poles, from the Kalu’ak, but even in BfA they added the neat mechanical one with Mechagon.

I just checked, and sorry they don’t look like they can be. It looks like you’re stuck choosing between form and function for the time being. They’re probably trying to make sure that there aren’t people wandering around whacking bosses with fishing poles. Or if they are that they’re taking the giant hit to effectiveness like you would see in real life.

RETPALLYJIL SAID SON WHEN YOU GROW UP

Q4tQ: How do you feel about facial hair on elves?

I love it. But I believe everyone should get to have a great big bushy beard if they want. Luckily, they are getting a little hairier in Shadowlands — but there could still be more. What happens if an Elf gets shipwrecked on an island somewhere? Do they not deserve to get a big castaway beard?

MUSEDMOOSE WOULD YOU BE THE SAVIOR OF THE BROKEN

I’m a big fan of the whole Serpentshrine Caverns complex. Having a secret hub of dungeons beneath the lake was super cool, and having to swim down the pipe to get inside the caverns was a great touch. I liked that there was the interconnected quest chain there too. I miss those dungeon hubs from Wrath of the Lich King and Burning Crusade. Everything got so spread out in the later expansions.

Runner up goes to Waycrest Manor. It’s a giant spooky haunted house on a hill, can’t go wrong with that.

OF THE BROKEN, THE BEATEN, AND THE KALCHEUS

Q4tQ: What do you feel is a more “traditional” mount for a dwarf: bear or ram?

Definitely ram. They’re short and stocky like Dwarves, excellent at climbing mountains, and have a hard head. Bears are great, but better as trusted companions rather than beasts of burden.

KALCHEUS WILL YOU DEFEAT THEM

Q4tQ: Expecting any big announcement or news from Blizzard at Gamescom Online?

Probably the pre-patch date. Maybe a look at something shiny from Overwatch 2 or Heroes of the Storm. Last year we got the Deathwing info drop a month before BlizzCon so we could see some teases for the next hero soon.

YOU DEMONS AND ALL THE NON-ENOS

QftQ: Based on the prelaunch hitting PTR, how long would you say we have until 9.0?

I think that we’ll likely still see early November as the release date. There are only three weeks left of corruption resistance upgrades left for the cloak from what I understand. So those will take us to mid-September. Add a couple of weeks on to let people play with maximum corruption possible, and then pre-patch early first or second week of October. A month of that and bam — early November.

I bet we’ll see the standard three to four weeks before the raid opens, which has us storming Castle Nathria at the beginning of December. This leaves plenty of time for the World First raiders to thoroughly break and beat everything in the raid — and the folks at Blizzard plenty of time to address the major bug and balance fixes before the Christmas/New Years’ Eve holiday.

Have a wonderful week everyone — if you’ve been petting your pets for Liz, give them a pet or two from me too. Make sure you leave lots of great questions for Anna to answer tomorrow!