Blizzard Watch plays Shadowrun in the Case of the Missing Minotaur 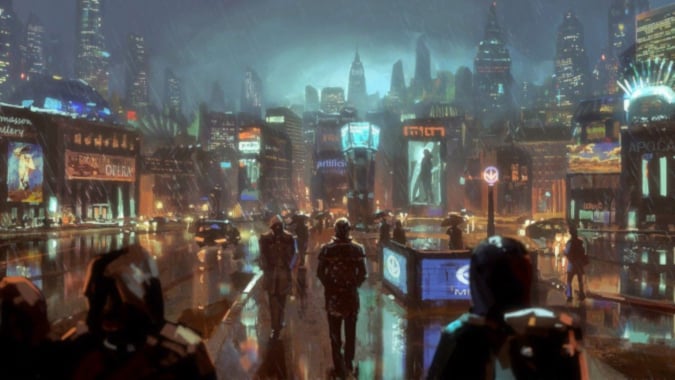 The Blizzard Watch adventuring group took the the mean streets of Nickel City again for a another cyberpunk-fueled Shadowrun adventure. This second session has led our group to a slight roster change as they got ready for the next horrors that awaited them.

This is the crew that gathered for parts unknown:

It was a fun game, and you should go give it a listen before you read any further, so you don’t have any spoilers, because we’re going into a game synopsis from here.

The story opened up exactly where the last session had ended. The group, weary from the horrors of the underground facility, had decided to spend the evening back at Val’s safe house. When they arrived at the worn-down, broken building, no one was expecting the lavish and lush home that Val had set up — complete with fully stocked bar, to the joy of Tia. After setting the rescued woman to bed, the group unwound and everyone decided some sleep was a good idea.

It was then that the group was transported to an old wooden feast hall, straight from the old viking movies. A meal fit for the adventurers of old was set before them on the great oaken table, flasks of mead and liquor waited for our party, and at the head of the table sat Mama. Keen listeners will remember her working the bar in the opening scene of the last adventure. Two new arrivals also were present, with Slink and Cliff showing up with the casual confidence of runners who have been here before and know exactly what the score is.

Tia did not quite take to being somewhere against her will and demanded to leave, which, Mama did without hesitation. Tia was returned to her body in the chair she fell asleep on back at Val’s place, with all of her companions fast asleep.

Mama had a job for the group. You see, Vinnie the flower has a really good heart and is honest to a fault, but he isn’t the brightest person. When he told the group he was going to look into what they found out, he did so, and tripped a million corporate alarms. He was taken captive in a place that Mama could not get to, and so she needed the party to go rescue him.

A daring plan was enacted showcasing all of the characters particular skills, with some hilarious banter and maybe a few missteps here and there. There was even a moment when Tia was able to face down a ghost from her past! As the party completed  their mission, they learned just a little bit more about Mama, and maybe a little bit more about the weirder parts of the world. I don’t know about you, but I’m looking forward to more adventures with this rag-tag band of cyber-kitted misfits.

Blizzard Watch is made possible by people like you.
Please consider supporting our Patreon!
Filed Under: Cyberpunk, Shadowrun, Tabletop, The Sprawl
Advertisement