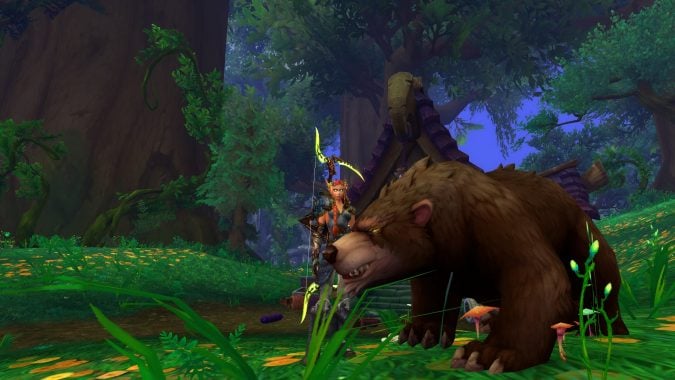 Don’t mind me, just getting ready for my afterlife! Really, I have to acclimate Rutherford most of all — he likes the trees, but despite palling around with me, he’s not all that into glitter. Baby steps, big bear. Baby steps.

This is The Queue, where you ask us questions, and we answer them while surrounded with butterflies and rainbows and unicorns.

QftQ: What recent lore enemies do you want to see in the Shadowlands, and where do you think they’ll be?

Some for me include:
– Ellisande: many would assume Revendreth, but her core motivation was protecting her people (even with some bad decisions); seeing her in Maldraxxus would be pretty neat
– Y’rel: hear me out; the Alt!Yrel’s universe was dying (is now dead?) and if she was in the Shadowlands somewhere (Bastion? She was all about saving souls) and that led to her resurrection and a Light crusade in our universe? That’d be cool.
– The Thunder King: Where *do* mogu go when they die? TK wasn’t organic at the time, do the same rules apply? Was he close enough to the loa (worshiped, nature powers) to actually be in Ardenweald? And what religious implications would *that* cause?
-Leyara Staghelm: She only went evil because of Malfurion’s incompetence and the Horde’s violence; does she really deserve Revendreth?

– Runas the Shamed: You broke our hearts once, Blizz. Give him a happy ending in ????? He proved his worth at the end…

Fandral Staghelm was a favorite of mine back in the day, so I’d love to see what he’s up to now. I’d also love to see what became of figures who were corrupted into badness — is Vaelastrasz in Revendreth because he tried to kill me, or is he hanging in Ardenweald? Would it be kind of awkward because we both tried to kill each other for a minute there?

A lot of the interactions with big bads from days of yore are a little bit awkward, just because we killed so many of them. I personally don’t really remember committing so many murders, but apparently that’s the way the Cookie crumbles. Come to think of it, I’m pretty sure all my characters belong in Revendreth now.

I think I should also find that Orc Garrosh thought was so dishonorable he got chucked over the balcony in Stonetalon. He deserves a chance to laugh in my face for a while. And then I’d stab him, because apparently that’s just what I do.

Q4tQ: Where’s Cory? I need to start my Monday’s with a Cory Queue. Now it just seems like a Thursday. Which depressingly it’s not! Thanks BW! :D

Well look at you, Mr. I-know-what-days-of-the-week-it-is-sometimes! Gloat a little more, why don’t you.

Q4tQ: if Liches were to be playable, would they be a new race, a new class, or something an existing race/class becomes on their own?

I don’t think Liches would be playable for a number of reasons. Like Death Knights, Liches are so inherently evil it would take something big to allow them to be played, and we’ve already gone down that path a couple times.

As a class they would be nearly identical to frost Mages, perhaps with a little more frost DK utility and corpse raising, so they wouldn’t make a compelling enough class to add yet another. As a race it’s unlikely they’d have enough customization or lore beyond something identical to the original Death Knight scenario. Also, it would seem a little weird to pigeonhole another class over the Lich styling, though a super buff Lich dual wielding Ashkhandis is something Rossi could definitely get behind.

Q4tQ So what’s happening to heirlooms in the prepatch?

More seriously, they’re losing their XP bonus and gaining other bonuses. We have a whole explainer post on the topic!

Q4TQ: If a player was truly dedicated, could they grind out all the mog/pets/toys/mounts/achieves for all 4 covenants? Or is it too punishing to switch or take too long to grind out those things?

Is it technically possible? Yes. Is someone probably going to do it and be featured in brief news articles for doing so? Probably. Should you? Hell no. One thing I learned from doing pet battle stuff for so long is, if it’s there, even if you think it would be sheer lunacy to do the thing, someone is going to do the thing.

If you’re debating it, I would urge you to consider maybe rolling up a couple alts and doing the grind with them instead. It’ll be somewhat less time consuming overall, but more importantly, we’re not sure what these Covenants are going to end up looking like a patch or two on. It’s one thing to go ahead and start grinding rep/renown for ability or power reasons, but if you’re just after the stuff, you’re gambling that the devs won’t add anything else to these Covenant vendors later.

Now, that is something Blizzard generally doesn’t like to do, so it may be a safe gamble, but it’s not one that I’d really risk when I have a couple alts kicking around. Usually they’ll add new factions you have to grind rep with to get all the new goodies. Case in point, I’m still a little annoyed that I hit exalted with the Argent Dawn, and then I went to Northrend and Tirion Fordring was like, nah, you need to prove yourself to the Crusade now. Bruh, you were literally begging me to feed you worms while I was grinding rep with the Dawn and I personally restored you to their good graces. I think I’m good.

Since Cory wasn’t around for an earworm, Pidia seemed put out that he didn’t link a song about this month yesterday. I’m only happy to oblige with one of my favorites!