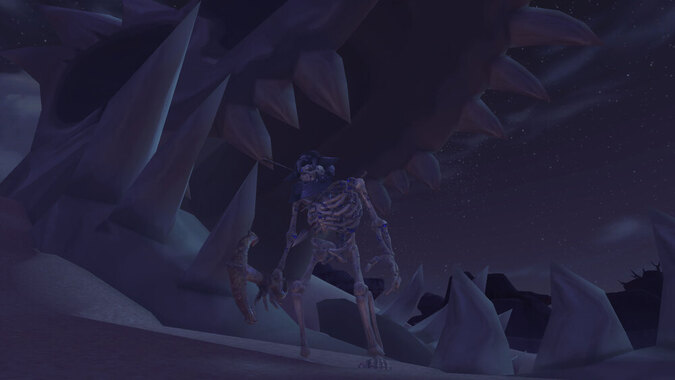 It’s the most magical time of the year! The leaves are changing, it’s finally getting cool enough that I can break out my thick sweaters, and skeletons have started to appear again. This may shock you, but Halloween is my favorite holiday. I know, I know — try and contain your surprise.

As the veil between this world and the next grows thinner, I take you now to — the Queue.

How would you rate the four seasonal affixes?

Fall is the best because it’s not too cold out, but still cold enough for big thick sweaters — plus it has Halloween. Winter is second because I like it when the little hairs inside your nose freeze when you take that first deep breath on a really cold day, and then immediately going inside and hibernating. Summer is third because you get the best thunderstorms. Spring is last because it’s too muddy after the Winter thaw, and the weather doesn’t know what it wants to be. Oh wait, you probably meant the Mythic Keystone seasons…

JAXDADDY SENDS SHIVERS DOWN YOUR SPINE

QftQ: What is the most horrifying location in WoW?

There are lots of good spooky places to choose from. The catacombs beneath Karazhan, or any of the forests with an excess of giant spiders and demons. But for my money, you don’t beat the pound for pound spooky of Waycrest Manor. You’ve got the organ, the ghosts, the witches, the creepy wicker tree constructs, and I haven’t even mentioned the pigmen yet. Look at Raal the Gluttonous the next time you’re there — I mean really look. We haven’t seen anything else like him anywhere on Azeroth. Did one of those weird stitched together pigmen live long enough to get to that size? Is he the inspiration for why they’re experimenting with adding pig heads to people? Do we really want to know the answer to these questions?

Q4Q: With the delay of Shadowlands when do you see it being released now. My view is its November 17. Only because that would give the Blizzard employees time to fix things before Thanksgiving and that Epic raiding would have time before the Christmas holiday. That or sometime in January.

Well, my Thanksgiving is next weekend, so I was going to be fine even before they delayed the release date. But I don’t know that giving them only 9 days before a major holiday weekend is enough time to smooth out the potential bugs. If they’re doing a November release I’d lean more towards November 10th, that way if they stick to the three weeks before the raid opens, they’d still probably have enough time for the Mythic race to be done just before Christmas. If they don’t do November it’s probably December 8th. Same reasons as before, it would give them time to squash the worst of the bugs pre-Christmas holidays, and then they could have raiding start in January after everyone is back from their holidays.

KALCHEUS SPEAKS WITH SUCH A SCREECH

Q4tQ: What’s the best Affinity for a Guardian Druid who is mostly going to do solo activities?

Feral Affinity is probably the best for anything older than the most recent expansion. That extra move speed is really nice with the size of raids. If you’re doing things in Legion it doesn’t hurt to have Restoration Affinity for the extra healing. Some of those fights still can surprise you with the damage they put out. That extra passive heal and getting the extra healing spells could mean the difference between an embarrassing 1% wipe and feeling invincible.

You could rename it to Zoomies, but then it might only work at three in the morning while you’re trying to sleep.

ENO WILL SHAKE AND SHUDDER IN SURPRISE

Another QftQ: Do you think Blizzard will introduce new sub-zones in Shadowlands patches, or simply redirect us back to the already-existing zones for new things to do?

I’d be surprised if we didn’t see new zones. With how large the Shadowlands are and the many infinite realms that supposedly make up the area, there should be plenty of Nazjatar or Mechagon Island sized zones that could be added as new threats emerge. From playing on the beta I don’t know how much room there is on the existing zones to really add in new stuff unless major phasing were to take place.

I’m not opposed to major phasing as players complete quests, that would allow for things we accomplish while questing and in patches to really push the story forwards, but it would be tough to ensure that by completing portions of the storyline you’re not overwriting things like rares and side quests. I don’t think we’ll see another Covenant added to the mix though unless it was a free swap to join it. Even then, it would be a tough sell for players who are invested in their current Covenants to ask them to change streams halfway through.

Q4tQ:
Now that Kalcheus is one with “the man” will his questions be answered in The Queue?

No of course not… wait what do you mean I already answered some?

Also, if you didn’t see the news from Friday, Kalcheus is writing for Blizzard Watch now! Welcome to the team!! Everyone give him another round of applause!

Did you know that Anna went to the trouble of making a Spotify playlist of all of the Earworms?! She did, and it’s amazing! Apparently, I’ve used David Bowie three times so far — I regret nothing!

Make sure to leave Anna lots of questions for tomorrow and don’t forget — there are only 26 days until Halloween. Stay spooky everyone!