The Queue: I see you 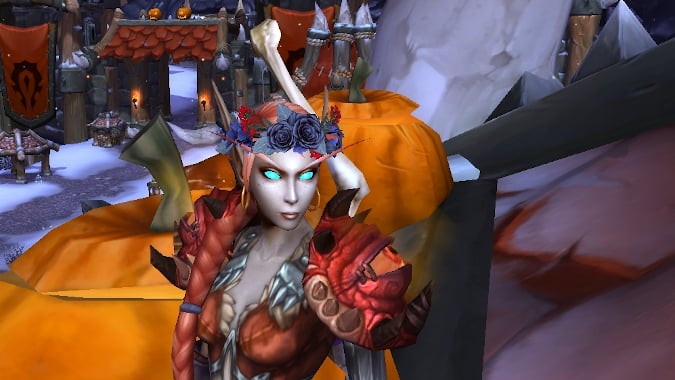 We’re all in the creepy spirit, so I had to change up the transmog to match. Rutherford is a great big scaredy cat though — he’s fine with commiting wide-scale murders, but there’s something about eyeballs that makes him have to take a sick day.

This is The Queue, where we stop eating candy corn just long enough to answer any questions you may have!

Q4tQ: Patch 9.0 made some baseline abilities available again to all specs. Is this the first step to bringing back Frostfire Bolt for Mages?

It’s kinda funny how the abilities I miss are not the same as the abilities anyone else misses. I always thought Frostfire Bolt was super weird thematically, and it seemed designed around giving Mages another semi-viable school to cast if they get interrupted, or if there’s a raid like Molten Core and it costs a ton of gold to respec every damn raid. Just let Fire mages cast Frostbolt and stop making +Fire damage a thing.

Now, specs and playstyles of old I wish would return is a whole different story. I really miss the initial incarnation of Fistweaving, though I understand why it was removed. The whole ‘deal damage to heal damage’ ideal is a playstyle I almost always gravitate toward, but that playstyle is also a total nightmare to balance — either one is too good and the spec is a natural choice over the pure disciplines, or both suck and it’s better to choose a different class. The original Fistweaving was too simple a rotation with too high a payoff (which is probably part of why I liked it, though).

Also, Snake Trap wasn’t very good, but it was hilarious, so while I’m not going to wish it was back per se, I would probably try to use it if it was.

Q4tQ: I’m not much of a cake person. For my birthday I like candles dripping wax on a plate full of brownies. If you’re not a cake person what do you like having for your birthday.

Despite having a birthday in late November, this is the only answer.

Question for the Queue
Do you think they should take every iteration of Shadow Form for shadow priests and just make it a choice in the barber shop? Since the look of shadow form has changed so many times and if you include glyph variations would be a sizeable selection of options.

I’d settle for some lights in that dank pit so I could see what the heck I was doing, honestly. Maybe I’ve missed a Barber Shop that’s better — the one in Legion Dalaran is somewhat promising, but when you actually sit down in the chair, the light shifts so it’s a backlight.

I will agree that, barring completely jacking with an entire system just so I can look pretty, more cosmetic options should be added to either the Barber Shop or the Transmog vendor. I’d argue that Shadowform’s Shadowforms should probably go over to Transmog, because the alternate coloration can really mess with your overall look, especially with some of the more out-there particle effects. There’s not much more disappointing than coming up with a dark, brooding transmog and then after you finish up and swap to Shadowform, there are weird green glitters that persist and you have to go find a different weapon.

Q4TQ: how would you feel if the next big gold sink mount for 5 million gold (or more) added to the game was… an instant-cast mount, like the Magic Broom from Hallow’s End?

I will say, if there’s another big, cool, flashy mount that costs a metric butt ton of gold, I sincerely hope it has a Barber Shop in it, because all I want to do right now is fix my hair.

Actually, come to think of it, that would fix the issue of crappy lighting in the Barber Shops. Let’s do it.