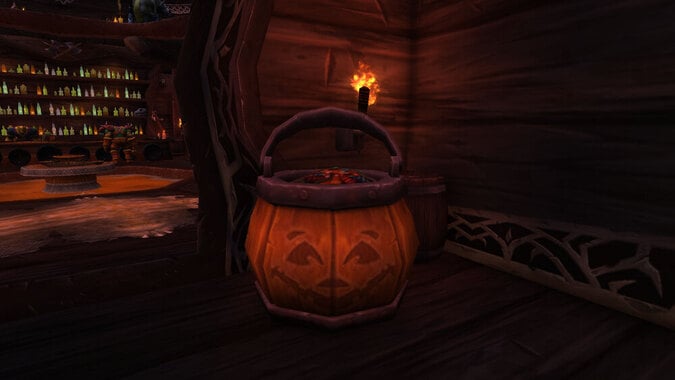 We are only nine days away from Halloween! Have you bought a dangerous amount of candy yet? Trick or treating may be different this year because of *gestures vaguely* everything — but at least there are bite-sized chocolate bars! I’m going to say something controversial now too… I like candy corn. I think it’s tasty.

While I’m dodging the flaming pitchforks and angry mobs, I take you now to — the Queue.

DAD WOD CAN’T SEEM TO FACE UP TO THE FACTS

Q for the Q: Which zone has your favorite music or is the most iconic to you? Totems of the Grizzlemaw just exudes everything about the Grizzly Hills for me. I’m also very partial to many of the Mists tracks.

Following up on my controversial take about Candy Corn, I don’t really like the Grizzly Hills music that much either. It just doesn’t do it for me. But I’m a huge sucker for the spooky Drustvar and Waycrest Manor music. Especially those creepy organ stings, they make me happy every time.

Did you know in Waycrest Manor that if you find and kill all of the hidden Organ Witches that there’s an easter egg in the foyer? Return to the front and you’ll be able to hear organ versions of the different Blizzard themes! Barring the spooky music, give me anything in the giant drums vein. Just huge drums making huge booms.

RJAGODA IS TENSE AND NERVOUS AND CAN’T RELAX

Is the game less fun without corruption?

It feels weird not having it after the many months of patch 8.3. I’m just thankful that I wasn’t using a huge amount of the extra haste% Corruption. Going from the absolutely absurd spellcasting times back to normal must feel awful.

I guess it’s one of those things where the saying “It’s better to have loved and lost than never loved at all” comes to mind. Maybe we’ll get something super fun to play with in patch 9.3 that makes me forget all about Twilight Devastation.

On the other hand, I’m almost kind of glad that Twilight Devastation didn’t live to see the level squish. To go from hitting for more than 900,000 damage to just 11,000 (give or take, I was told there’d be no math) wouldn’t quite have the same punch.

TAUREN4 CAN’T SLEEP BECAUSE THEIR BEDS ON FIRE

Long time listener, first time caller… Just logged back in after a 3 month break, bought and downloaded Shadowlands, updated graphics card etc. Now I see the release of Shadowlands is delayed. That’s fine by me honestly.

QFTQ (Or anyone):
Are there currently any pre-patch content / quests I should have access to? I seem to see lots of discussion on blizzardwatch / other sites regarding pre-patch “stuff” (e.g. zombie invasion?), but frankly I’m in my “Haven’t logged in or checked sites in months” haze so completely out of sorts here. Perhaps the info floating about is from datamining or betas?

Hey, thanks for being here!

You’re in luck — the pre-patch event hasn’t started yet. In theory, it was going to be in full swing right now, but with the push back to the Shadowlands release date they put the accompanying Zombie Invasion on ice. There are only a few weeks of quests associated with it so they didn’t want everyone to get tired of the event before we were even close to moving on.

I’m sure that when it is time for the dead to rise and stalk the living you won’t be able to miss it. Ghouls will rampage through the capital cities and I hear we’ll be hunting down one of Sylvanas’ biggest allies to try and figure out what she’s been up to. Until then you’ve got plenty of time to shake the rust off!

Do you have any go-to music to help you write the Queue?

If I’m writing to it, it’s got to be something that I’ve heard a million times before. That way it can fade into the background and help to block out distractions. Preferably lyric-less too. Otherwise, you might see — I wear my sunglasses at night, so I can so I can — and then I gotta go back and fix that and remember what I was talking about before I got distracted.

Lately, I’ve been listening to a bunch of the Supergiant Games soundtracks. They’re all fantastic, even though none of them quite live up to Transistors and I know I just said no lyrics, but who can stay mad at Ashely Barret singing. Not me! In fact when I wrote the Queue on Monday I was listening to this orchestra performing them live for the Game Music festival 2020. Sadly, composer Darren Korb and Ashley Barret were supposed to be there but because of the travel restrictions, they couldn’t make it. Still, it was an excellent concert!

I accidentally posted my question in the wrong Queue, so here it is again:
Q4tQ: If Alleria doesn’t have her transmog clouded by shadow, why must we SPriests hide our pretty clothes in void?

Alleria feels to me like a different kind of situation than the Shadow Priests we see roaming Azeroth. Alleria got a bunch of her Voidness from that Naaru we beat up in Seat of the Triumvirate. Getting it directly from the source would be a stronger hit. Like trying to drink out of a firehose. So since she went right to the source, she gets that amazing looking deep purple. Where the Shadow Priests are kind of getting their power passed down in a cosmic game of telephone so it’s a little less pure and potent. So the raggedy shadows bleeding everywhere kind of look is because it hasn’t permeated every facet of their being.

OftQ (Observation for the Queue):

Doing Therazane dailies for rep. You know how the guy in the gem cave hands you a bomb and you denotate it near certain colour gem blocks to get and collect shards of different types?

Had a guy /w me and (good-naturedly) teasing me that the explosion can’t actually hurt me. You see, I always plant the bomb, run away a few steps and then turn around to watch it explode. I *know* it wouldn’t harm me, but it’s a bomb, ya know? Why would I play a game and then not have fun with it? I guess it’s one of them “there are two kinds of people” things xD

Are there any small, silly things you do just for the sake of immersion?

Anyone who willingly stands in a bomb must be a Goblin. They go boom clearly you should stand far away from them. You did the right thing here.

In the Horrific Vision of Stormwind, just as you get into the Trade District there’s a guy who is tied up near one of the mini-bosses. He’s clearly being used for target practice, and once you deal with the elite you can choose to set him free. I’ve never noticed any benefit for doing this. There’s no extra currency or a buff — nothing. But every time I go in there I make sure to set him free. I’d like to think he’d do the same for me.

Twice in one week! I’m so lucky I get to hang out with y’all! Make sure to leave lots of spooky questions for Liz tomorrow!