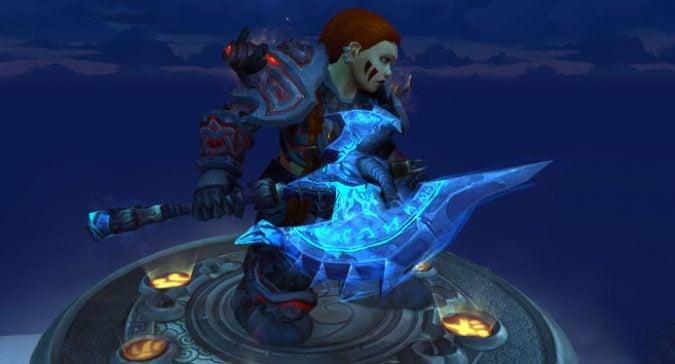 It has been a week, y’all. Let’s just say that in order to use the only working bathroom in my house, I have to wedge an umbrella into the area above the toilet, and it sounds like a heavy rain just breaks out from time to time for no discernible reason. I haven’t slept more than two hours at a stretch since Sunday.

Serious question: Is tabletop gaming really that big nowadays?
I haven’t played one in years.

It’s hard to give an objective answer to this question. The RPG hobby as a whole has absolutely abysmal market tracking data, so I can’t tell you that there are a ton more sales or a lot more people buying games with any real hope of accuracy. It’s fairly safe to say that a lot of people seem to think there’s more of a market than there was a few years ago, with companies starting up and a fair amount of Kickstarter activity.

It’s often said that tabletop RPG’s are a luxury hobby and there’s a lot of truth to that — in a weird way the hobby reminds me of pay to win online games that are basically supported by a few whales who think nothing of dropping a ton of money for all the bells and whistles. You see games like Invisible Sun which can cost you upwards of $250 bucks to buy and you realize that price is basically in line with everyone at your D&D table buying a $50 PHB and the DM also outlaying money for the DMG and Monster Manual — tabletop gaming is not a hobby that is what I’d call thrift friendly.

Without the ability to really track successful Kickstarter campaigns (a lot of game companies like Onyx Path rely on KS to fund game development) it’s hard to know how much money is flowing, but it is flowing. You see KS campaigns quite freely, there’s new game companies popping up all the time, and it’s not like these are small endeavors — it’s not just some guys making games in their basements. But the hobby is still a niche market, and without accurate market tracking, it’s hard to know how close we are to an early 2000’s style collapse, or even the 80’s/90’s D&D bust when games like the Buck Rogers RPG nearly ended TSR.

Well, that, and the whole let’s make a hundred games instead of focusing on the ones we have that sells but yeah, it was a wild time. It’s hard to say how close we are to that sort of thing now, or if tabletop RPG’s are on the cusp of a whole new kind of popularity well beyond their previous status as a small niche market.

Q4tQ: How do I prepare the house for a Halloween party? How do I get enough friends to have a party?

Step one: Don’t have a single visitor you aren’t forced by circumstances to accept in the entire history of having your own place to live.

Step two: literally never ever throw a party, save for that one time you got married, and even then do that at someone else’s house.

Step three: seriously I’m the worst human being on the face of the earth to ask, I hate gatherings.

ELAINE DE SHALOTT, THANKS FOR THE REMINDER

Anyone farming paragon caches this is the week!

I’d like to get my wife her flying in BFA before Shadowlands comes out, so thank you for the reminder, it’ll make doing the Ankoan rep easier.

Race restrictions on classes puzzles me. Once upon a time certain races (& genders) weren’t allowed to serve in roles like engineering but once allowed to study math & physics they did just fine. Once upon a time there were no Night Elf druids but somebody eventually went first. The reasons given for class restrictions just don’t hold water. Worgen & Troll feral druids do the same damage so why not Gnome & Vulpera. Bears is Bears, they just have different models.

Maybe with shorter races you replace Bear with something like Wolverine, giving them different markings for each race (Dwarf, Goblin, etc.) but the combat animations would essentially be the same. Why not let everybody be Shaman? They’d have to create totems for each race. My 2 cents, I think Blizzard doesn’t open the classes because they don’t want to have to come up with all the new models they’d need (yes, it would be a big task).

Q4TQ: Why not open all the classes to all the races? What’s the ruckus? Why all the hub-bub?

We talked about this on Lorewatch this month (as a head’s up, in case you want to go hear what we had to say about it) and I think you’re right that some classes like Druids have more obstacles than others, with a need for individual Druid forms meaning that there’s a lot more design time that for other classes. I don’t know if that’s the only reason Blizzard doesn’t just let everyone be a Druid (which I argued for this weekend) but it’s probably a factor.

I believe there’s some reasonable lore reasons for not letting everyone be a Druid or a Shaman — they don’t have anyone to train them, perhaps, or their culture is not particularly in tune with the way that tradition works. But by now, I’d think enough cultural admixture in the Horde and Alliance would have led to at least a few unconventional members of those classes.

No Draenei Warlocks, though. Warlocks literally exterminated their culture and spent tens of thousands of years hunting them. It’s just impossible for me to believe that there’s a way for a Draenei to be okay with being a part of that discipline.

I heard people don’t like Arms Warrior in 9.0… What’s wrong with it? It didn’t change much but that’s not necessarily a bad thing. I’ll take that over WoD or early-Legion Arms. 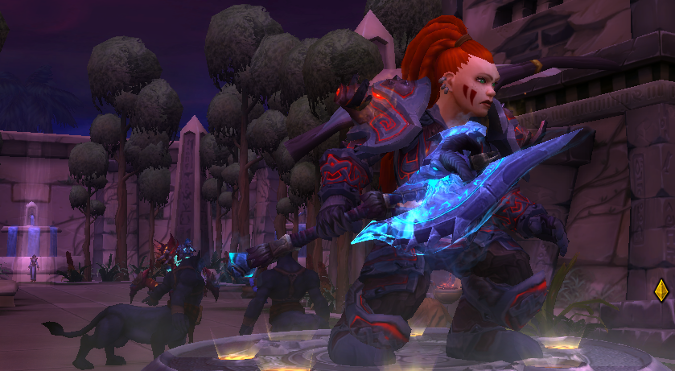 Honestly, I think a lot of players don’t like the somewhat metronomic pacing of Arms. There’s a kind of rhythm to it — hitting Overpower to buff Mortal Strike, then using Slam between OP and MS to bleed off excess rage. I personally enjoy Arms — the Dwarf Warrior I’m showing off in today’s screenshot does really solid work while soloing and questing — I can take on the elites in the Invasions without worrying about dying at all.

Now, does she do the same DPS as Fury? Nope. She hits hard but slow and requires some windup, and she’s lacking abilities she’ll get at 60. But Arms feels pretty solid as a leveling spec and I’m enjoying it overall. Yes, it lacks in excitement. You swing, swing, swing, and none of the moves have the visceral feel of Rampage, but they’re steady. It could use some damage, but between Ignore Pain, Second Wind and Die by the Sword I can stay up for a very long time if I’m being focused on.

So far I’ve liked Arms as much as either TG or SMF Fury. But as a caveat, if you’re in a raid group looking to output the most DPS possible, Arms is simply not it right now.

Okay, that’s the Queue for today. Hope y’all are having a good week and that you have a safe Halloween.

Blizzard Watch is made possible by people like you.
Please consider supporting our Patreon!
Filed Under: Dwarves With Axes
Advertisement