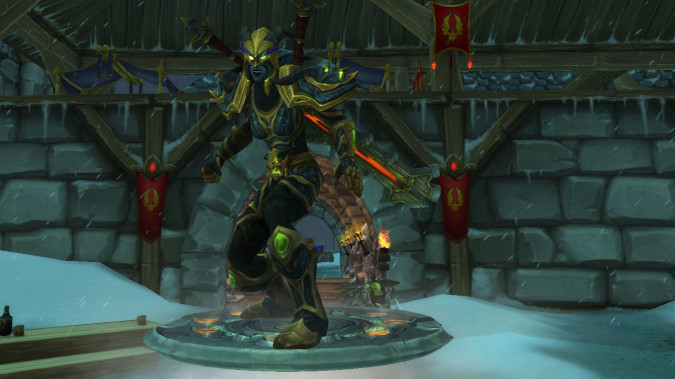 So in my gaming life, I’m choosing between Assassin’s Creed Valhalla, where I run around snowy Norway, and World of Warcraft, where I run around frigid Icecrown. In real life, it’s -15c outside, which is 7 degrees F. So basically everything is cold whether it’s in real life of in my gaming and that’s why I’m transmog farming in Firelands even though I’ve got literally nothing left to collect in there.

Anything to feel warm is what I’m saying.

It’s the Queue. Couldn’t the undead invade somewhere nice for once?

Why do InstaPot recipes never include the time it takes the pot to get up to pressure? Like, yeah, you say a 7 minute cook time but actually it is closer to 20…

This brought back the days of Adam writing Queues entirely about whatever he was cooking for dinner and me desperately trying to find anything but cooking comments in the Queue. What I’m saying is, please don’t turn the comments of this Queue into nothing but InstaPot cooking comments and questions, Liz needs stuff to answer.

Anyway, I have no idea. We have an InstaPot and it makes good Mac and Cheese, that’s about all I know about it.

Since we’re not getting class sets in the first Shadowlands raid (boo), how would you design the warrior class tier armor for Castle Nathria? Is there a particular boss you’d like to see a set of plate based on, or would you go with the general theme of the place?

I’d lean heavily into the whole Gothic Vampire on Acid aesthetic of the zone. The Plate Sets would be based on the big gargoyle dudes, the mail sets would be on something like Hopecrusher or another big angry critter from the zone, while for the leather sets I’d do something pretty bat-blood themed, like Animastalker or some such. Cloth? Use a lot of chains and other themes of imprisonment and bindings being broken to represent all the folks trapped as Anima batteries.

ENO BRINGS UP A CLASS MASHUP

What about Shadow Warriors, do you think that would work?

It kind of loses what’s great about Warriors, that we don’t do magic as such. I mean, I think a kind of ‘Dark Paladin’ that use the Void instead of the Light could be really interesting, but it’s not very in keeping with the rage-driven Warrior.

Q4tQ Are all weapons in Shadowlands going to be “choose your own adventure”, or are Fury warriors going to have to permanently change their Loot Spec to Arms to ensure 2Hers?

I don’t think all weapons are going to be “Take this token to your Covenant” because, wow, wouldn’t that be nice? The very fact that I find the idea so compelling means to me that it’s absolutely not going to be that widespread.

I think Fury who want to go Titan’s Grip and have no interest in Single-Minded Fury will likely switch their loot spec to Arms, yeah. It’s what I used to do back before Legion, it works fine. Arms and Fury share all the same DPS gear otherwise. Sadly, SMF Warriors will have to risk getting the occasional shield instead of a 1h weapon if they spec Prot instead of Fury to get 1h weapons.

I mean, it would be nice if we could ensure we get the weapons for the way we want to play, but World of Warcraft loves RNG and I doubt they’ll ever get rid of it to that degree.

MONOPOLYGUY ASKS WHY SYLVANAS DID SOMETHING
If the Helm of Domination is so powerful and helpful to us even in pieces, we use it to enter the shadowlands and control the Jailers creations, why did Sylvanas leave the pieces behind when she broke it? Seems like she would take them to make it harder for us. That would be the only thing so far that may convince me that she is doing something helpful for once

I wouldn’t put it past her to leave the fragments behind because she’s hoping we kill the Jailer for her. I mean, if she’s Soulbound to the guy the way we’re going to Soulbind ourselves to various folks, as a lot of people have speculated, then what happens when he dies? Does she get to grab hold of all that power he’s been using to screw with everyone, and to what end? What does Sylvanas actually want out of all this?

Maybe it’ll even touch upon why Nathanos wanted to get Tyrande to kill him so badly.

LUOTIANX IS BACK WITH A WARRIOR QUESTION

I’m starting to level my first warrior, what are the things I need to be aware of?

You’re not going to be sneaking past people. Don’t even try.

Charge is ludicrously fun. Embrace this. You’re literally throwing yourself at things.  This is great, it’s super fun, go with it.

They’ve added some abilities like Ignore Pain, which you’ll get at level 12. It’s really great for the one thing Warriors are terrible at, namely, an ‘oh snap six mobs are trying to eat my face’ button.

Otherwise, it’s a pretty straightforward class. Hit stuff. Yell at stuff. Jump around like you’ve got House of Pain on repeat. It’s fun.

Okay, so that’s the Queue for today. Liz is tomorrow, please don’t just ask her about InstaPot recipies.

Blizzard Watch is made possible by people like you.
Please consider supporting our Patreon!
Filed Under: Instapot, Scourge
Advertisement