What are your favorite naming conventions for player characters? 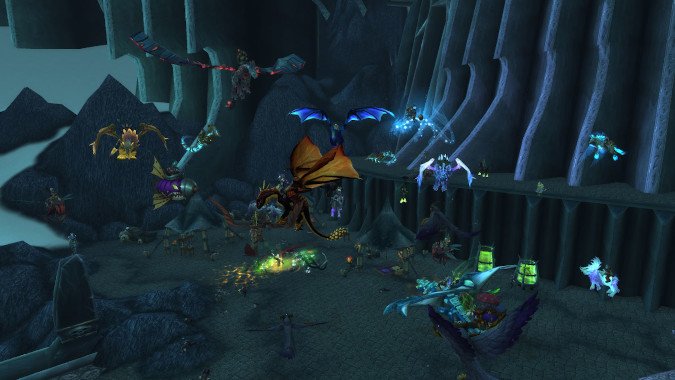 With the Northrend Shadowlands pre-patch event going on, one of the most fun — the most gear-rewarding — one of the easiest ways to obtain Pitch Black Scourgestones is to kill the rare spawns every twenty minutes. Large groups gather, sitting on their mounts, floating above the spawn point.

Looking around, I can’t help but read the names, seeing the same characters over and over, and thinking about the different naming conventions used. Easy-to-read, real names are rare. Seldom is there an Andrew, or even such a name with an ASCII character if that name was taken, like Añdrew. Nor do I see fictional names that would work in a fantasy setting like this, such as Lancealot. There are more pop culture names, like Harrypotter.

More than that, character names that are hard to read, such as Zeuatunaii. It’s like random letters that began as a name, but it was unavailable so letters kept being added until it was accepted. Otherwise, it may have been chosen because it looked like a good name, but the pronunciation was not thought about at the time of creation.

Names that show up even more are ones that have key words like Hunt, Totem, or Holy signifying that they are a Hunter, Shaman, Paladin, or Priest. Occasionally, they will have a name like Holyheals and turn out to be a Warrior. There are names that were created to specifically go with titles. Crazy the Insane or Salty Sweet — again, while not specific players I saw, it was these titles I saw with some clever names attached.

My least favorite are names that are meant to be comedic, or created out of the mood the player was in at the time. Something along the lines of Ilikenachos. Is that a name the player will be happy with later on? It’s not a name someone would have been given. Of course, seeing a single character, there is no telling how their other characters are named. Are they all Harry Potter characters? Are they all named after foods they liked? Were each created to go with a specific title?

What are you favorite types of naming conventions that you have seen? And do you name your characters this way? Or are each named based on the mood you’re in at that time?

Blizzard Watch is made possible by people like you.
Please consider supporting our Patreon!
Filed Under: Character Names, Northrend, Waiting For Rares
Advertisement