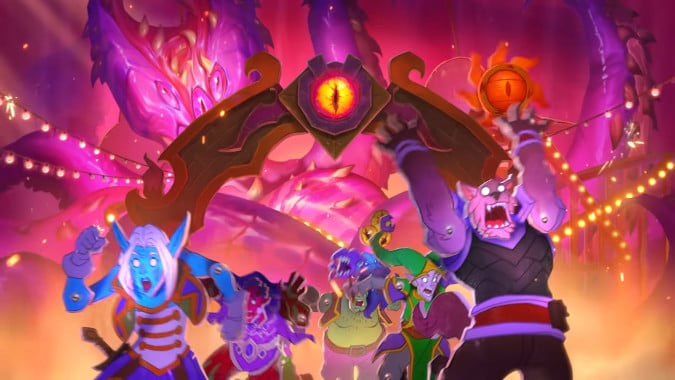 What are the most interesting cards in Hearthstone’s upcoming expansion, Madness at the Darkmoon Faire? Which cards look good thus far, with the most potential to become the cornerstones that we will build our decks around, and which will help shape the meta?

Are the Old Gods themselves lurking, and bidding their time to take over the world of Hearthstone, or are they lackluster, and there is more power to be found in other Legendary — or even Common — cards?

These are the ten most interesting cards from the Madness at the Darkmoon Faire expansion. 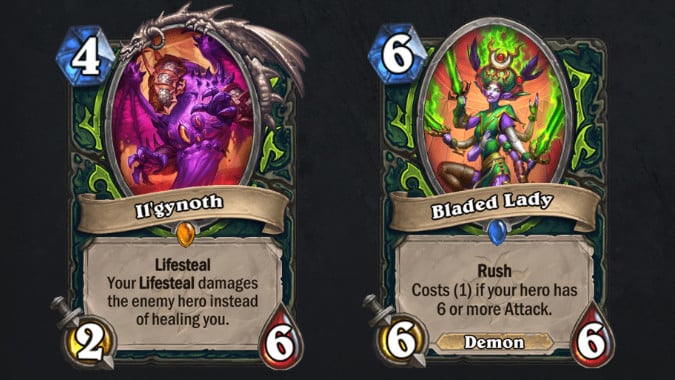 This card has the potential to double all the damage you deal with your Lifesteal cards. Your trusty Aldrachi Warblades potentially deal four damage instead of two! Your Eye Beam deals 3 to a minion and 3 to its owner! Suddenly, a Demon Hunter can switch from “conservation” mode into “full attack” mode. And this card also makes it easier for you to deal damage against control opponents. Even if they build a wall of minions, you can just hit those minions with your Lifesteal effects — and end up bypassing their defenses, by having your Lifesteal damage their faces anyway.

But much like with Auchenai Soulpriest before it, do be careful when using this card — for depending on circumstances, its effect may be detrimental to you! If you slap down Il’gynoth on the board, your opponent might decide to ignore it, while damaging your hero. You could end up in a situation where you’re desperate for healing, but unable to heal yourself, since most (if not all) of the healing Demon Hunter gets comes from Lifesteal effects.

How difficult is it to get 6 attack as a Demon Hunter? As it turns out, it’s not difficult at all. Besides having several weapons to equip, Demon Hunters also have many cheap spells that boost their attack during that turn. Which means that activating this enormous mana-cheating effect is likely to be very easy. Having a 6/6 minion with Rush for only one mana is ridiculously good. This is the only Rare card on the list, but its effect is crazy enough that it wouldn’t be difficult to imagine this card being a nerf candidate. 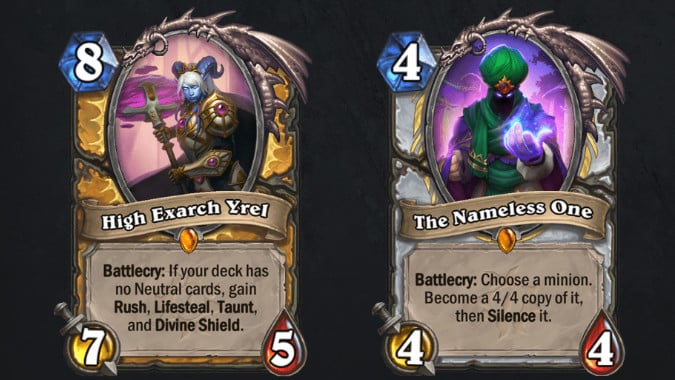 Unity. Precision. Perfection. Do you miss Zilliax? If you do, you might be in luck, because Yrel is set to perform a very similar role — for Pure Paladins, at least. “Pure” cards, which require that your deck has no Neutral cards, always have very powerful effects to compensate for that deck building restriction. Getting a minion with a whopping seven attack that also has Rush, Lifesteal, and Divine Shield (and Taunt to boot) certainly qualifies as a “very powerful effect” in my book.

Yikes. Big, huge yikes. This card might make someone ragequit Hearthstone. Mind control type effects are always super infuriating for the player on the receiving end of them. Priest gets a minion that, for a mere four mana, makes your own powerful minion lose whatever effect they have and steals that effect for their own 4/4 minion. Talk about an enormous tempo gain, for a class that is usually much more focused on value than tempo. This card will probably make waves. 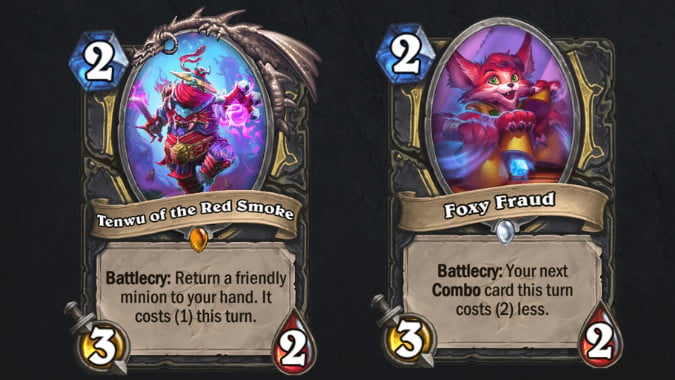 Tenwu of the Red Smoke

Mana-cheating effects will always be a ticking time bomb. Back when the Scholomance set was being revealed, we speculated that Potion of Illusion was going to break the game somehow… and it did. Turtle Mage became an oppressive deck for tournament play, and Blizzard had to nerf the poor turtle. Well… here we go again. Rogue gets a Legendary that allows any friendly minion to cost 1. But… at least the effect only lasts for the same turn in which Tenwu is played. So perhaps that will ensure that no super-crazy, game-breaking combos will appear this time. Perhaps…

A common minion makes it to this top 10! Because let’s be real: this is essentially a 3/2 that costs 0 mana, as long as you play any Combo effect that costs 2 or more after it. That would be powerful by itself, but we’re talking about Rogue here — a class that excels in playing as many cards as possible on every turn. This card enables that type of interaction by itself, and it can be paired with effects like Shadowstep for even crazier possibilities — such as bolstering your Questing Adventurer or your Edwin VanCleef. I predict this card will be a Rogue staple this expansion. 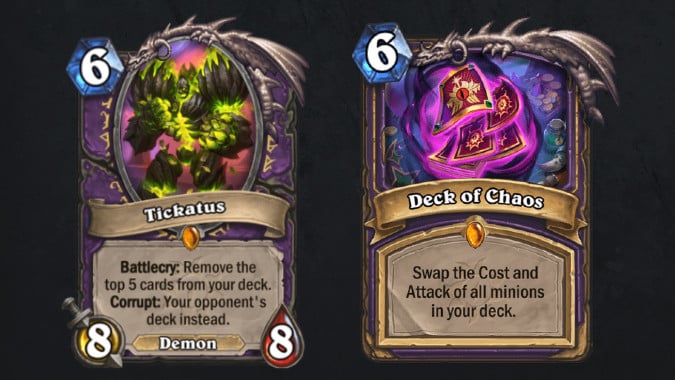 Warlock now has anti-fatigue tech! Draw to your heart’s content! As long as you can Corrupt this card (by playing any card that cost more than it while it’s in your hand), Tickatus will allow you to “catch up” against your opponent in those long control games that go to fatigue. Warlock usually is at a disadvantage on those games, because it’s a class that draws a lot of cards, and thus it risks hitting fatigue earlier than most opponents. Tickatus can remedy that by destroying cards from your opponent’s deck. And even when not in fatigue situations, this can potentially deny them some key cards too. Oh, and we almost forgot — it’s an 8/8 for 6 mana.

Potentially broken effect. It’s hard to evaluate how far-reaching this card’s effect is, but suffice to say: there will probably be some real crazy outcomes from playing this spell. I mean, just off the top of my head: Malygos becomes a 9/12 Dragon with +5 Spell power for 4 mana. You can play that and burn your opponent with spells in the same turn. And I’m sure there will be more. Frankly, six mana is a bargain for how potentially powerful this spell is. I almost expect it to receive the Luna’s Pocket Galaxy treatment, and end up having its cost increased later on. 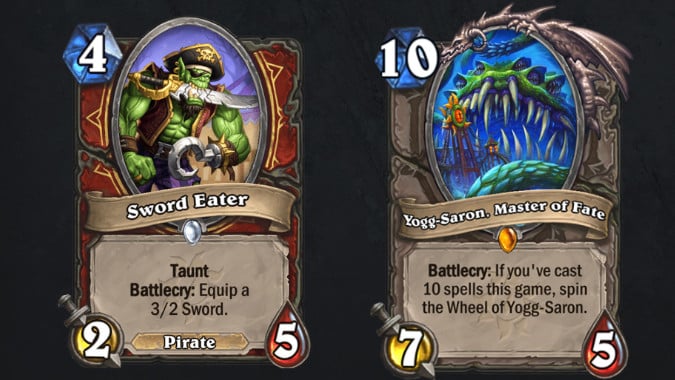 Another common card! And one for aggressive Warrior decks this time. A sturdy taunt with 5 health, that has the Pirate tag for that sweet synergy, and that also equips you the equivalent of a Fiery War Axe. In fact, that’s the comparison we should be making: it’s like playing a Fiery War Axe and also playing a 2/5 Pirate with Taunt that only costs one mana. All bundled into a single card — and you can have two of it. This will become a Warrior staple.

Finally, an Old God! We’ve already talked about the four Old God cards that are coming in this expansion, and in that analysis, we believed that Yogg was the winner. Well, the full set has been revealed, and that opinion has not changed. Of all four Old Gods, Yogg is the easiest to simply stick in a deck and use — all it requires is that you cast a bunch of spells. Many classes, like Mage, and Rogue, are very well-equipped to do just that. And despite his hefty 10-mana cost, using Yogg is probably going to greatly turn the tides in your favor, with much less setup needed than the other Old Gods. 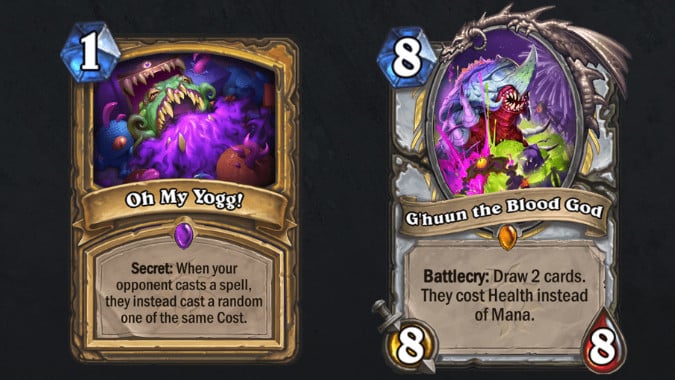 While not as likely to be powerful or game-changing as the 10 entries on this list, the Epic Paladin Secret, Oh my Yogg!, is probably my favorite card ever in Hearthstone. And in the article showcasing the Old Gods of this expansion, we didn’t include… the artificial Old God, G’huun the Blood God, which makes it into the set as a Legendary Priest minion. So keep those two cards in mind as well!

From the top 10 list, it seems like Demon Hunter, Rogue, and Warlock are the big winners of this expansion, with Priest, Paladin, and Warrior racing behind. The other four classes (Druid, Hunter, Mage, and Shaman) didn’t have much luck this time. But, of course, this is all just speculation from our preliminary evaluations, as well as from taking the temperature of the community regarding the Madness at the Darkmoon Faire set as a whole.

It’s very likely that there will be some surprises along the way. Time will tell! In the meantime, keep an eye on these cards, and let’s see how many of them do end up being among the defining pieces of this set.

Blizzard Watch is made possible by people like you.
Please consider supporting our Patreon!
Filed Under: Hearthstone, Il’gynoth, Madness At The Darkmoon Faire, Old Gods, Yogg, Yogg-Saron, Yrel
Advertisement