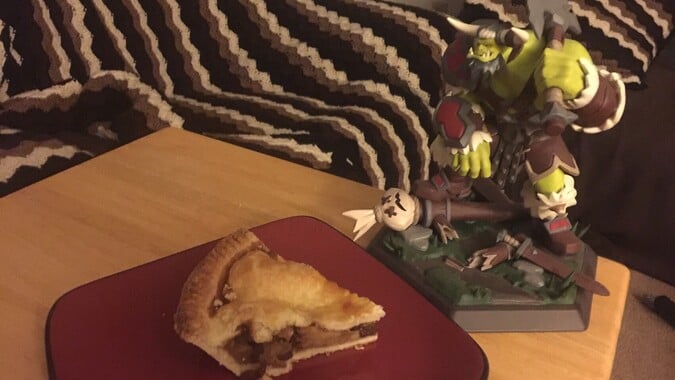 It’s currently a little after midnight on Monday morning and I just ate a delicious piece of pie. It was an apple, lemon, and raisin pie with apples from my parent’s backyard. You can all go ahead and be jealous now.

While you’re getting over your pie related jealousy, it’s time for — The Queue.

QftQ: Did any of y’all ever have a toon who decided to forsake the land and retire in Vashj’ir?

Too moist, I don’t want to retire there. I’ve only had two characters level through Vash’jir at all. The first was to see the story in Cataclysm and the second was many years later to see if everyone was blowing it out of proportion in terms of being a terrible place to level. They were, as a zone I think it’s fine, but Mount Hyjal felt like a smoother leveling experience.

I do have a character that I’ve retired far away from land though! My ‘original’ Tauren Druid who I changed into Zandalari for the dinosaur forms. I’d played him for so long that I got my friend Arcana to do art for him! So now he gets to spend his days and nights sailing the high seas of Azeroth as captain of a pirate ship!

MUSEDMOOSE IS TIRED OF LOOKING FOR ANSWERS

Q4tQ: do you have a particularly memorable “surprise!” drop? Not necessarily the item you wanted, but something you had no idea you could get.

Asking because I just got a Sentinel’s Warhammer from the Nathanos world quest. It’s a night elf warhammer. I didn’t know the night elves even had warhammers. I mean, it works real well for my pandaren rogue, but it was definitely a surprise.

I have two actually, both Wrath of the Lich King drops. The Battered Hilt and the Super Simian Sphere. I never in a million years expected to see the Hilt drop, let alone actually win it when it did. But I did and I promptly sold it so I could afford to buy the parts for a Mecha-Chopper. Sadly they’d already fixed the bug where you didn’t take fall damage while riding the motorcycle, but it was still a great investment.

As for the Sphere, that wound up going to a party member who had no idea whatsoever that it existed or what it did. I was a little miffed, but sometimes you eat the bear, and sometimes the bear eats you.

Q4TQ: Has playing a different class/spec during pre-patch changed your Shadowlands “main”?
I was set on finally maining my warrior, as Fury seems neat, but playing my prot pally again was SO much fun I’m thinking of changing. On top of how fun it was, if I go ret sometimes I can use the rocket hammer mog now…

I’m very set in my bear ways. But I have really been enjoying my new Warlock that I’ve been leveling since the squish. So I think I may wind up playing them sooner than I thought in Shadowlands. My Mage is devastated at this news.

I really like the Demonology rework that happened sometime after Cataclysm. I have so many imps to throw at people! I’m just imagining that I’m picking them up off of the ground and yeeting them as hard as I can at whatever I’m fighting. I still miss Hellfire though. I almost exclusively used that to level my first Warlock back in the day. Who needs health anyway? That’s what healers are for!

In general, which armor classes do you think have the best and worst transmog options?

I put down Plate as the best with Mail as the worst. But I still really like a lot of the Mail sets, I just feel like they have the most misses. Like the extra windy shoulders that Shaman got in Blackrock Foundry. They should’ve just called that set “Bad Hair Day” and left it at that. I really love the plate stuff though, which is weird considering that most of my characters are leather and cloth right now. Plate just has that heaviness that really makes it feel like it could survive a fight with the raid bosses that we’re dealing with.

Here’s the poll link if you want to add your own votes!

QftQ: Am I ever going to transmog out of my DH’s fiery mage tower artifact glaive skins?
A: probably not.

I wasn’t as much a fan of the Havoc appearance from the Mage Tower. It was just a little too small for my liking. If they’d been closer to the size of the Warglaives from Illidan maybe I would’ve liked it more. But it’s really hard for me to choose and glaive appearance that isn’t the Warglaives as it is. I like lots of swords and axes and fist weapons, but inevitably I’ll always go back to them.

I worked so hard to get them in the first place, and then even harder to convince my guild to run Black Temple Timewalking! Which wound up being super fun, but also frustrating when we reached Illidan and he wouldn’t taunt swap properly. I’m still not sure how we managed to down him, it kind of felt more like a fluke than anything coordinated.

SHOW WOLFOFAETHER THEIR SILVER LINING
Q4tQ: Does it bug you (like it does me) that the most efficient way to get to the current timeline pre-patch events requires going to a Dalaran from the past. It just seem so … inelegant.

It is a little for sure. With the world ending ramifications of the Scourge invasion and the desperate need for heroes to go and bolster the Argent forces in Icecrown, you’d think they could’ve sprung for a Mage or two to make portals to the tournament grounds. Or at very least a Zepplin to fly you up there. If it makes you feel better, you could imagine that the threat was so great that Dalaran flew over there from the Broken Isles and Chromie camouflaged it to look like it used to back in the day out of a sense of nostalgia. Which I imagine is a pretty powerful motivator for the Bronze dragons.

I’ll see y’all next week just before the start of Shadowlands! Are you excited? I know I am!  Until then, wash your hands and leave Anna a bunch of questions for tomorrow!