The Queue: wait, what? 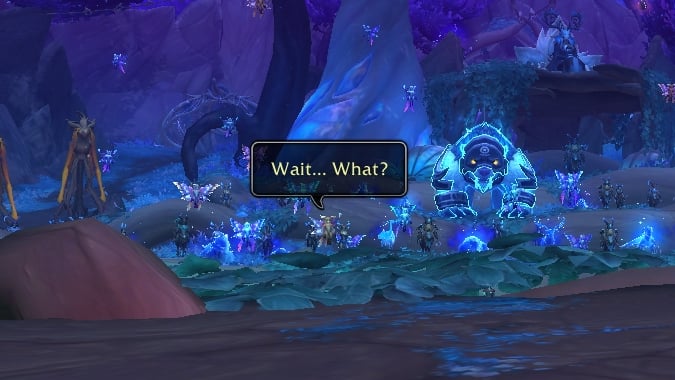 It’s been such a long year!

This is The Queue, where you ask us questions and we… wait, what?

Q4tQ:
Are people using the special cooking recipes seemingly meant to be used for Torghast?

I would — the tenders especially are great for solo grinding as a non-healer who really misses the leech I had in previous expansions — but frankly I’m still mostly just selling as much of the mats as I can. There’s a component in each of those recipes that still goes for incredible amounts of gold on the AH, so that it feels wasteful to use it rather than list it.

I get not flying in shadowlands, cause the Time Vorte…I mean “In-Between” is just awesome. but how does one fly in Pandria and what the heck is Draenor!?

Flying in Pandaria is as easy as flying everywhere else now, luckily. You just pick up the Expert Flying License from the flight trainer in either Stormwind or Orgrimmar depending on your faction, and you’re good to go.

Draenor is a time in the past, both in terms of actual, real-life years and in-game years. We took a time warp in order to prevent someone from preventing future events, which wouldn’t come to pass for us anyway because it was in an alternate universe. The Big Bad of that expansion intended to use that as a staging point for an invasion of our universe though, so we had to jump in and butterfly effect the entire pants off that whole universe. It’s basically a way to see the characters that are long since dead in the original Warcraft RTS in action.

Wait, what? I know. It’s basically a way to see the characters that are long since dead in the original Warcraft RTS in action.

Actual Q4tQ: which Blizzard villains do you think would be taken out by the power of friendship?

My money’s on Illidan and Arthas, for pretty much the same reasons. Also Reaper.

Isn’t that pretty much what the Wisps did to Archimonde?

In a less literal sense every time the narrative swings back to “we must band together to defeat this great evil” technically we’re using the power of friendship to defeat our opponent… like that time the world got stabbed, and everything worked out until we decided to do Azerite about it. Wait, what? Eh, I bet that whole thing got resolved anyway. No big, we don’t need friendship, let’s go muck about in The Maw again. I’m sure that’ll fix it.

You’re dead on with Reaper, though. Get it? Dead?

My headcanon is Purian tastes like Durian, but without the ghastly, eyewateringly horrific smell. Of course, that makes me wonder whether ghosts have the ability to smell things, which I’m pretty sure was a Queue question recently.

Truly, time is a flat circle.