The Queue: Mirror my malady, transfer my tragedy 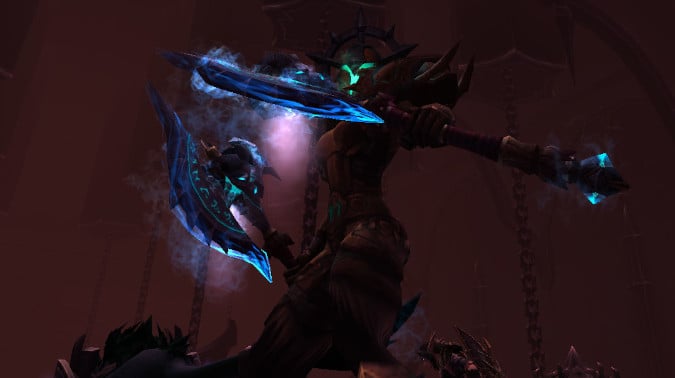 It’s very important to find small good moments when life is dark. I don’t pretend to know what any particular reader of the site is going through, save that we’re all going through something. For me, it’s a lot of video games and a lot of just trying to keep moving. I hope you have something that gives you solace.

This is the Queue. Let’s look at what y’all have to say.

ARTHONOS IS USING THAT COVENANT GEAR

Q4tQ: Have you been upgrading your covenant armor at all? On my alts I’m using it as the main source of gearing progression, while my main was able to offset his bad luck with a new chest piece by upgrading the robe.

Yes, even as I very slowly have accumulated gear from Castle Nathria, I’ve been using the campaign gear to fill in slots I didn’t have, such as bracers or boots. It’s pretty cool, actually. I’m happy with it.

Finally checked on my Assassin’s Creed: Valhalla order. I had forgotten that I had ordered it from Gamestop. Moreover, apparently it hasn’t even reached its carrier yet and it’s been 12 days. I’m patient because I have other games to play right now anyway but the longer this goes on the less likely I’ll order from there again, for sure.

I have to admit I haven’t bought an actual physical copy of a video game since Titanfall 2, which was pretty great and which I recommend to everyone. I will say that both AC Valhalla and Immortals: Fenyx Rising are excellent games and Valhalla is worth waiting for. I’ve enjoyed it a great deal.

SIBYLLE WANTS TO KNOW ABOUT THOSE DULCET TONES

Q4tQ: Where do I find a list of the voice actors in Shadowlands? They don’t seem to be listed in wowpedia just yet. I’m sure there’s some “credits” thing in WoW or on the website, but haven’t found it yet.

Also: Are there any particular voices you like/dislike in SL? Overall, I love all the voice acting, with a special shout-out to the dredgers and to – Kalisthene! She’s amazing. Would love to know who voices her.

I’m not sure how up to date it is but the Shadowlands page on IMDB has a list of voice actors. Some of the characters are definitely new to Shadowlands, so it should at least help you narrow it done some.

And I was pleased as punch to find out Courtenay Taylor — Jack from Mass Effect 2, the Sole Survivor from Fallout 4 — is the Archon in Shadowlands. Huge fan of her work.

THAT DEPENDS ON YOUR POINT OF VIEW, BORTAINE

So the Shadowlands are just four flavours of hell/purgatory, right?
– Bastion – welcome to the afterlife, wipe your memory and mindlessly ferry souls to be judged for the rest of your eternal life
– Maldraxxus – welcome to a literal gladiator arena, where if you don’t make it you’ll get stitched into something grotesque
– Ardenwaeld – welcome to what looks like a peaceful forest where pretty moth ladies will prank you for the rest of existence
– Revendreth – welcome to actual vampires casually drinking your soul essence at a posh party

Q: Will we see a “heaven” type part of the Shadowlands where truly noble souls with no unfinished business go? Somewhere that is the opposite of the Maw?

In ancient Greece, for example, when you died you either went to Elysium (also sometimes known as the Isles of the Blessed) or the realm of the dead, where Hades ruled. And that was it. Most people ended up in Hades’ realm — you had to be related to the gods to go to the Isles of the Blessed, at least at first. The conception of the afterlife changed over times, and Elysium became a place where the chosen of the gods went. But even some of the greatest heroes, like Achilles, were said to wander as shades in the Underworld, and when Odysseus spoke to the Shade of Achilles he was told that it was better to be a peasant among the living than a prince among the dead.

Why do I bring this up? Because you’re using a fairly modern conception of the afterlife to view the Shadowlands, but none of the Shadowlands are meant to be a reward, exactly — there’s no ‘heaven’ or ‘hell’ here. Each realm we see (which are likely just a small fragment of the whole Shadowlands) is simply a place where specific people go, with only the Maw being a prison — or potentially the garbage dump for those souls so corrupt and determined to remain so that even their anima is polluted by who they were in life.

I don’t think any of the realms we travel to, even the Maw, are a hell. They’re more like the Otherworld inhabited by the aos si or the realms of Niffleheim where most of the souls of mortal beings went when they died in Norse myth. That wasn’t a great place to go, but neither was it a punishment.

Blizzard Watch is made possible by people like you.
Please consider supporting our Patreon!
Filed Under: Cage Me
Advertisement