The Queue: Falling with style 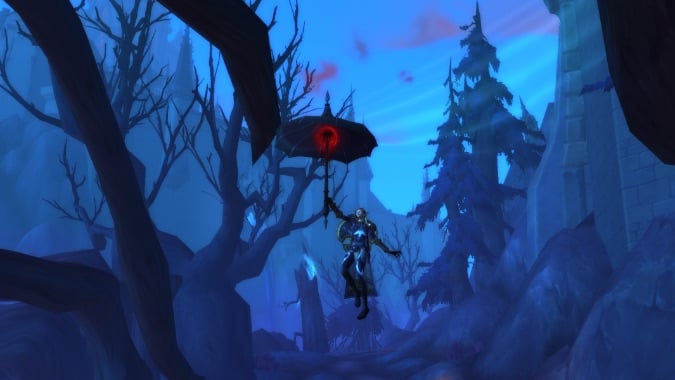 Parasols are the most stylish way to travel. I’d ask you to prove me wrong, but you can’t.

So dumb questions but how do you know what world boss is available? And do you need to be in a raid group?

You’ll see it as a World Quest on the map — look for a purple quest with a golden border. When you get over there — and all of the World Bosses are in somewhat hazardous areas with elites, so take care  — you should see the World Quest pop up like any other.

I do recommend joining a raid to do them — you can have issues tagging the boss otherwise — but it doesn’t have to be anything formal. When the World Quest info pops up, click on the LFG icon next to its name. It should show you groups that have formed to take down the boss — just click to join one and jump into the fight with the rest of the group.

None of the fights are too hard, so just use your common sense, follow along with the group, and you should be just fine. Once the boss is dead, you’ll automatically get your loot — you don’t even need to click.

The most difficult part, in my experience, is trekking out to the boss.

Why are there not more graveyards in SL? I’m tired of running halfway across the zone to rez on my squishy toons, especially in Revendreth.

I imagine they aren’t that used to people dying here. Really, it’s a wonder there are any graveyards.

But also it seems to fit with the game’s limited transportation options. Zones are smaller, sure, but they have an average number of flight paths and with no Flight Master’s Whistle it can be a trek to get from place to place. And being a ghost in Revendreth is particularly hard because the place has multiple levels, and your ghost may have to wait for an elevator. With few graveyards combined with sometimes frustrating terrain — particularly in Revendreth — I really think ghosts should be able to fly. We can fly in some previous expansion zones, so it’s not too big of a leap. Instead death can be a real frustration.

Are you interested in the announced Star Wars open world game or if not, what other franchise would you love to play an open world RPG for?

I’m always interested in the opportunity to swing lightsabers at people. But I’m also a bit tentative about both open world games and pre-release hype.

Open world is not an appealing feature to me. On one hand, it means an infinite environment to explore. On the other, it means lots of randomly generated — and ultimately meaningless — encounters. I understand the appeal of games like Fallout, and I’ve sunk a lot of hours into Fallout 4, in particular. The world is fun to wander around and just see the unusual things and familiar places scattered about.

In a way, the world becomes more of a character than the characters. (And I’ve always felt this was the big difference between RPGs made by Bethesda and RPGs made by Bioware.) The story can feel almost secondary. And frankly there’s only so many times I can be bothered to defend a town from Super Mutants. Learn to defend yourselves! I’m tired of getting a message you need to be rescued every 15 minutes!

But at the same time… Star Wars, with its massive universe and huge cast of characters, may be the best setting for an open world game. It could let you explore every corner of the galaxy and meet all of your favorite characters, whether they’re new or old, whether they’re well-known or just bit parts. That’s a really tall order, though, and I’m not sure if any game dev could pull it off.

Which leads me to my next point of concern: pre-release hype. I am certainly interested, but I’m not going to get too excited. We don’t know anything about the game except that it’s being made. It could be a game I love! It could be a game I hate! It could be something somewhere in between (far more likely). If I get my hopes up and set my expectations high, I’m guaranteed to be disappointed.

So I’ll just say that I look forward to seeing more.

MISTAH JAY [NOT A MOD] ASKED:

Q4tQ: Do you have any Level 2 Covenant upgrades?
Q4tQ: Have you upgraded your Covenant armour?

These questions seem to really be one question: how do I spend my Anima?

I have not bought any level 2 Covenant upgrades. They’re wildly expensive, Anima isn’t easy to acquire in bulk, and I just don’t see the point in most of these upgrades. With one exception: the transportation network upgrade that gives us access to an Oribos teleport. But I’ll need 15,000 Anima in total to get there, when I probably pull in 2k a week at most. I am ridiculously far away from being able to afford upgrades.

However, I have dumped plenty of Anima into gear upgrades. I’m currently wearing two pieces of Covenant gear that I’ve bumped up to 197 ilevel (as high as they’ll go), and I was wearing more last week. However, I’ll be ditching the Covenant gear entirely soon, because I’m running Castle Nathria — Normal drops 200 and 20 gear, while Heroic drops 213 and 220 gear.

Now that I don’t have any reason to upgrade gear, I’ll probably start inching towards those level 2 upgrades. But with that amount of Anima, it’s going to take a while. Probably a long while.

Q4Liz: when are you going to play Monk again? The BW Monk community misses you =(

(And by BW Monk community, I think I mean Luo, Lefty, and I?)

I don’t really know. When I switched to Horde I already had a Paladin, but nothing else of notable level. Instead of starting over, I just picked up my Paladin and went from there. I was a little disillusioned with Mistweavers at the time, and it felt like I good time to change.

Now, however, I do have a level 50 Monk on the Horde side — I used my Shadowlands boost on it, so I had a character I could easily switch to if I didn’t enjoy playing the Paladin in Shadowlands. But I haven’t leveled it and I’m not sure when I will. From a practicality standpoint, it makes the most sense to level my Druid — they’re just such good gatherers, and they’ll be even better when flying hits. Materials are always in demand — perhaps now more than ever with the current crafting system.

Right now I have a Druid who’s nearly 50, my boosted Monk at 50, and a transferred Shaman at 50. What do you lot think I ought to work on? I’ve been working on the Druid. (I already know some of your answers, I’m sure.)

I can offer up the one Mitch didn’t take from yesterday, How does your goblin glider usage compare to previous expansions. I definitely used more in BfA thanks to Zuldazar.

I honestly haven’t used one yet!

Though, as a Paladin, when I’m falling, I’m more likely to hit Divine Shield on my way to the ground. And the Stylish Black Parasol (see above) is a very fashionable way to fall when Divine Shield is on cooldown. (You may think that seems like an odd situation, but it actually happened to me just a few minutes before writing this.) I also have a set of Regurgitated Kyrian Wings which, while disgusting, serve the same purpose.

All in all, I have four things on my bars that will let me snowfall, glide, or simply survive a speedy trip to the ground. Goblin Glider is the last one I reach for.

Is there canonically only one Maw Walker?

No. If you disagree, you can take it up with Steve Danuser, who said this in a pre-Shadowlands interview:

In Shadowlands, the player’s character becomes known as a Maw Walker, though this is not a singular title; fictionally, a number heroes of Azeroth like yourself have demonstrated the ability to enter and leave the Maw. We want a sense that it will take many heroes working together and strengthening all four covenants if there is to be any hope of achieving victory over the Jailer.

That’s all for today, friends. I hope you have a good weekend. Please pet your dogs and cats for me, and I’ll see you back here next week.