The Queue: It begins! 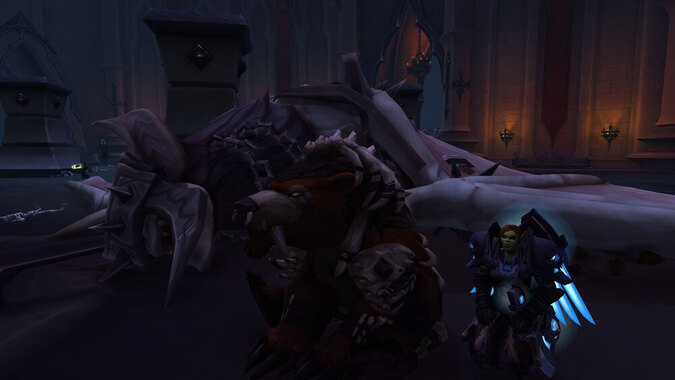 My raid just got our first Mythic Shriekwing kill and it feels pretty great. We’ve spent maybe a little more time in lower difficulties getting gear than we necessarily needed, but now we’re getting some real progress! After Shriek we went and took a look at the Huntsman and his Dogs, and they wound up taking us for a walk. I think we’ll be able to get it with a bit more practice, but it was nice seeing that it wasn’t a gigantic step up in difficulty from Shriek. The funniest part to me is that both Mythic Shriekwing and Huntsman are supposedly easier than Heroic Denathrius. So we’ve started in on Mythic without putting the final nail in his coffin.

While I read up on some strategies for the next few bosses, it’s time for — The Queue.

Asking this because I’m a filthy casual these days since my hands stopped working, and we’ve only just cleared normal. Hungering Destroyer is my fav fight there, as it’s great for a ST oriented melee. But I hear it gets more complicated from hc onwards so the jury’s still out.

So I’m 9/10 Heroic and 1/10 Mythic now. I think that my favorite fight is definitely the Council of Blood. It’s got enough going on for tanks that it’s not super boring, like Huntsman or Hungering Destroyer, and it has my favorite raid mechanic in I don’t even know how long. I love watching the whole raid do their line-dancing. It’s such a fun mechanic and brings a smile to my face every time. The rest of the fight is cool too, I dig that you can change it up based on what your raid is good at handling. Whether that’s interrupts and area denial, controlling the waves of butlers and Stone Legion that assail you, or just being really good at finding your partners — there’s a boss order for you!

As for my least favorite, I mentioned Destroyer and Huntsman as being boring, which is just me speaking as a tank. If you’re the tank holding onto Huntsman instead of his dogs you’re going to just be tanking a guy who doesn’t change up his attacks at all for the entire fight. At most you’ll have to move him slightly further away from where you’re standing if one of the souls that the dogs rip out of the other tank get too close. My co-tank (pictured above) and I joke that the real stacks you have to watch out for in that fight are drowsiness.

Neither of those can hold a candle to my actual least like fight — Artificer Xy’Mox. I just really dislike the last phase mechanic where he drops a giant axe in the middle of the room that vortex’s everyone towards it before exploding. I dislike that my natural Class-based mobility isn’t enough to get me out of danger. What’s the point of having Stampeding Roar if I don’t get to be the big damn hero for using it?

Q4tQ: What is your favourite Covenant Set? My personal favourite is the Leather Venthyr set as it looks so darn cool! :D

I like my leather Venthyr set, but I think that the plate Venthyr is the best. Those Gargoyle shoulders are too great to not fall in love with. Plus those angry clawed feet send a message, and that message is — don’t get in their way when they start to kick.

So my DI hunter has hit Bastion and has tamed a Phalanx – bit stumped for a name. Any suggestions?

How does it feel about Mondays and lasagna? MechaGarfield has a ring to it.

JAXDADDY ROCK YOUR BODY IN TIME

QftQ: So, what was the actual point of removing the portals from the Pandarinan shrines or Legion Dalaran? Did it make the game better or just make some dev’s nipples hard to make the choice for us?

I am a little salty because I had the misapprehension that a portal room meant some place convenient on the Alliance side. Not the stupid out of the way mage tower.

They wanted to make it easier for players to move their hearthstone into the new content. For some players, the potential portal related benefits of Dalaran or the Shrines might’ve outweighed the current content. I think they also wanted to make sure that they weren’t splitting the player base across multiple cities as much. They were awfully convenient, but the new portal rooms haven’t felt that bad either. Although it is faster to use the Orgrimmar one than the Stormwind one, I feel for y’all there.

I’ve always been the kind of player to keep a bagful of random teleport rings and tabards, so maybe that helps too. I’ve barely needed to use my Commander’s Signet of Battle, but those couple of times — ooh boy!

YANA WHO GO UP IN DE AIR, COME DOWN IN SLOW MOTION

Q4tQ, if you have the portal to Oribos unlocked, do you have your hearth set to your covenant, or still in Oribos?

Oh yes, I instantly moved my hearth to Sinfall the second I unlocked that. So far in Shadowlands its felt like I’ve spent more time trying to get to my Covenant hall than to Oribos, so I’m glad that I just hearth there now. I do wish the portal to Oribos dumped you out in a more convenient place, but that’s really just being greedy at this point.

If you’re contemplating a change in Hearthstone location, don’t forget that when you set your Hearthstone the game saves your position and character orientation. So you can make sure that you’re always pointed in the direction that you’re most likely to go. It’s a neat trick that could save you potentially save you dozens of seconds over the course of an expansion!

Have a great rest of your week everyone! Make sure you stay warm and leave Anna lots of questions for tomorrow!