The Queue: One of these days, I’ll learn. 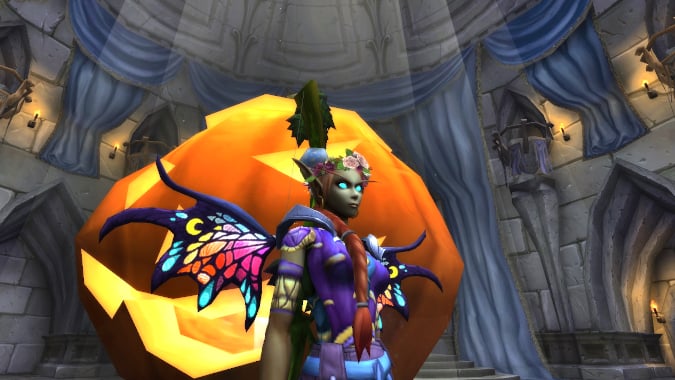 Once again it is Tuesday, and once again I definitely did not forget it was server maintenance and as such I am using a current screenshot I planned and took in advance before the servers went down, not an older one. Yes, this definitely reflects the current state of things in-game! Nothing at all to mark this as time-sensitive!

This is The Queue, where you ask us questions and we definitely don’t procrastinate on the answers.

Like many players, I focused solely on the campaign. I hit level 60 in Revendreth but still had most of the zone to finish. Once I did that, it has all been various covenant-related matters and Callings, along with the joys of Torghast and the Maw. I’ve basically ignored all the side quests in all the zones.

Q4TQ: Have you done or are you doing the side quests? Do you plan to go back and do them later?

Some of them I just skipped outright — the larion tamers in Bastion, for instance — but in general, I either did them, or really really intended to come back and do them later.

The thing is, the quest log this expansion seems so small that I picked them up as I came across them, and eventually had to drop them because I also needed to save the world or accumulate more soul ash or do some mysterious nonsense for Ve’nari or whatever. Sometimes I’ll re-come across a fairy who needs my help to find a book, or a lich who needs me to do… something really gross, probably, and I’ll re-pick up that quest with the full intention of doing it later. Then, eventually, I’ll have to drop it again. When I do drop it, there’s no marker or questline anywhere to say there’s some poor soul who still needs my help with their menial task in the armpit of nowhere, so there they wait until I happen across them again, and the cycle begins anew.

If Twisting Corridor allowed you to save progress, but you had to run back all the floors you’ve already cleared when you came back, would you do it?

You mean like a raid, where you have a “lock” so you run through all the environments you’d already cleared up to the trash for the next boss? For me, a busy parent in the middle of doing de facto homeschool during the pandemic and trying to hack it as a freelancer to pay the bills, basically writing things a few words at a time on my phone or in a notebook to be typed out after the kids are in bed, that would be amazing. I don’t have time to do Torghast nearly at all these days, and that’s a real shame because it was my favorite thing to do in the beta, and roguelikes are a favored genre of mine, after survival games — which honestly, are roguelikes but slightly more gritty, usually.

However, given the variables involved with anima powers and procedurally generated layouts, that may be just a wee bit too much stuff for the servers to store temporarily on the back end. I honestly don’t know enough about the infrastructure about Blizzard’s storage environment or how they engineered Torghast to say.

Question – Has anyone upgraded their mission table yet, and if so, did it seem worthwhile?

My nagging feeling is that it probably isn’t, since the current mission table almost requires an add-on, which means I can only really use it at the computer instead of on my phone, which means that faster mission completion and champion healing isn’t going to help significantly when I can’t do multiple missions in a day.

I have 5000+ anima in my pocket, and since I am in record as Not Seeing The Point to the Paths of Ascension, I think I’m going to save it for the anima conductor or transport network level 3 upgrades.

I haven’t upgraded the mission table yet, because it’s unclear as to exactly what it does, and I’m already throwing in plenty of good anima after bad on my other upgrades.

I upgraded the transport network, because having fun with my mushroom BFF is always a good idea. Upgrading the conduit network thing seemed like a solid move, but I’m kinda burned out so I didn’t really use that quite as much as I thought. The Queen’s Conservatory, however…

The Queen’s Conservatory is just continually disappointing me, and I keep throwing Anima at it because it’s supposed to be really good! You get a Wildseed — which takes up an inventory slot, and there are seeds for each of the four Covenants and varied rarities — and let it grow for three days, and then… you get like, two leather and maybe four meat. It was deflating. But I kept hearing that, no really, once you start upgrading it and unlock better functionality, it’s so worth it. So I upgraded it, and it unlocked a system where I could feed each seed another set of items which are moldering away in my bags now, and it now takes a mere two and a half days to get four leather and five fish! But no wait, it’s the next upgrade that’s worth it, sorry for the confusion… and meanwhile I have all this junk in my bags that I don’t dare actually use, because it could be better one day.

So, like the rube I am, I’m going to upgrade it again, because of course I am. I have to keep this stuff in my bags until I do, after all. One day, one day, it’ll be worth it. I hope.

Question for the Queue

Is there any REAL reason why we don’t have player housing? Because the reasons Blizzard gave in the past don’t really hold water today.

I’m just a little tried of my character saving world a 100 times over only to be homeless at the end of the day.

You were literally given your own fort with a set of lackeys to command and the ability to change buildings based on your needs. You can even decorate it for a couple of (very specific) holidays. You have a special Hearthstone to take you there right now, if you’d like.

The thing is, when people say “player housing” they mean something fully customizable and rearrangeable like Animal Crossing or Minecraft but WoW‘s MO has always been a lightly sanded down version of the fully-featured game — as well it should be. For example, the difference between a fully featured auto battler like Auto Chess and the demi-auto battler we got in the Adventure Table this expansion. Animal Crossing and Minecraft IS building your own stuff. They have other features, but building is at the core of those games. It isn’t at the core of WoW.

Believe me, if I were able to get something completely fully featured in WoW like the Wildstar housing, I would spend thousands of hours puttering around in there. But I — sadly, incredibly sadly — don’t think it’s realistic to ask something of that complexity of WoW. But being able to turn my spike-laden Garrison into one of a few set designs — something less defensible but making up for it by being incredibly glittery, for instance — would be really nice. It’s very, “you can get a house in any aesthetic you want as long as you want spikes.” But even that I don’t think is in the cards.

And hey, if one game isn’t your absolute ideal experience, it’s also nice to play a different game every so often. Right now I’m playing 7 Days to Die quite a bit, and it’s definitely in part because I’m constructing a completely wild mountaintop base… just as soon as I kill a few more zombies.