Forged in the Barrens is the first expansion in the Year of Gryphon! BlizzConline showed us enough cards to smother a Quilboar 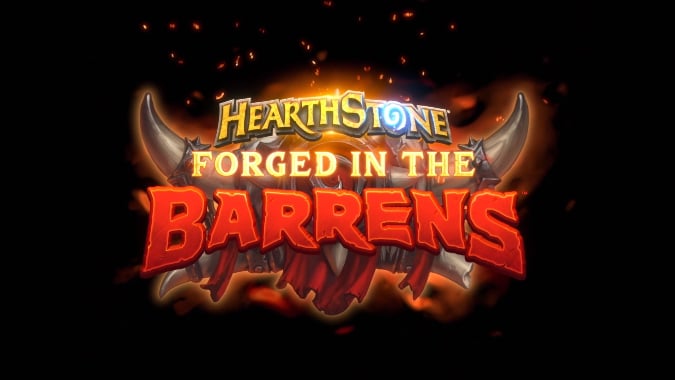 Hearthstone’s Year of Gryphon is kicking off with the Horde-themed Forged in the Barrens expansion. The expansion looks to recreate the trials and travails players face as they make their way through the primary leveling zone for Horde players in World of Warcraft. Along with the usual range of new fun and powerful cards, we’ll be getting a new keyword, Frenzy, and a new mechanic — ranked spells. Check out the trailer to get a feel for the themes of the expansion.

Pretty cool, right? But it also gives us a look at the perils we’ll be facing in the Barrens.

Let’s dive into all the juicy details of the new expansion. 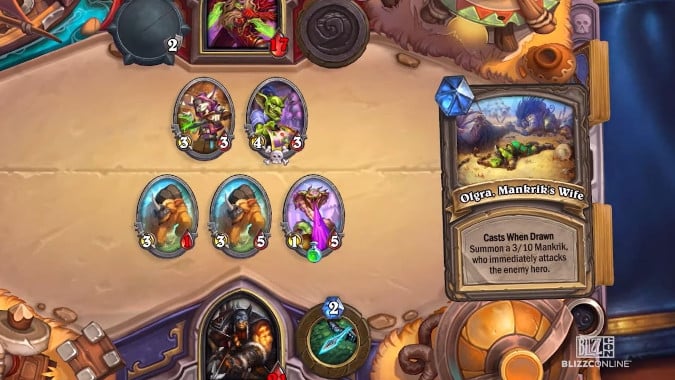 New cards bring the heroes of the Barrens to life

One of the most iconic characters in the Barrens is Mankrik. The call of “Where’s Mankrik’s wife?” was a constant question in General chat during Classic, and it inspires Mankrik’s mechanics in Hearthstone. When you play Mankrik, he shuffles an Olgra, Mankrik’s Wife card into your deck. When drawn, the card summons Olgra onto the board.

She’s a 3/10 minion who immediately attacks the enemy hero. I would expect this effect ignores Taunt minions. This could be a great way to get a surprise lethal when your opponent thinks they have one more turn to survive. 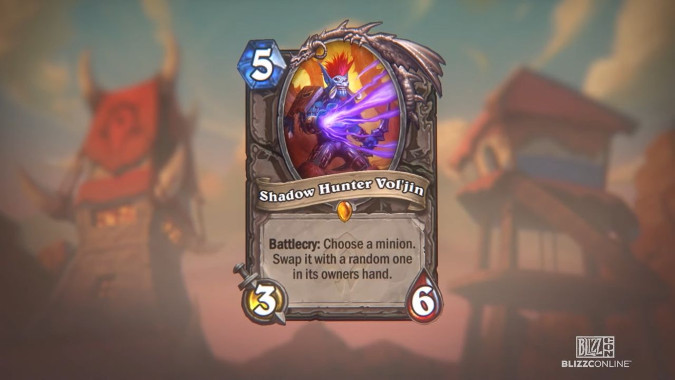 Another iconic figure is Shadow Hunter Vol’jin. A 5 mana Neutral Legendary, he swaps minions between the board and the hand. You can use it on one of your minions to swap a low-cost minion for a huge minion you have in hand. You could also use it as a kind of Sap on your opponent’s minion. Hopefully, it puts something a little less threatening on the board.

Vol’jin will be free for all players who log into Hearthstone starting as soon as today.

Desperate Prayer is a 0 mana Holy spell for Priest that restores 5 health to both Heroes. Priest is all about prolonging the game until their late game cards can take over, and zero mana cards are always nice. A Spirit Healer is a 4 mana 3/5 Neutral epic that synergies with Holy spells was showcased a little later. I expect it will only see play in Priest and Paladin decks. After you cast a Holy spell, like the 0 mana Desperate Prayer, Spirit Healer will give a random friendly minion +2 health.

Bru’kan is the Shaman Legendary. A 5/4 for 4 mana, he provides a massive +3 Spell Damage to Nature spells only. Both Desperate Prayer and Bru’kan showcase the ways the development team is using the new spell schools. 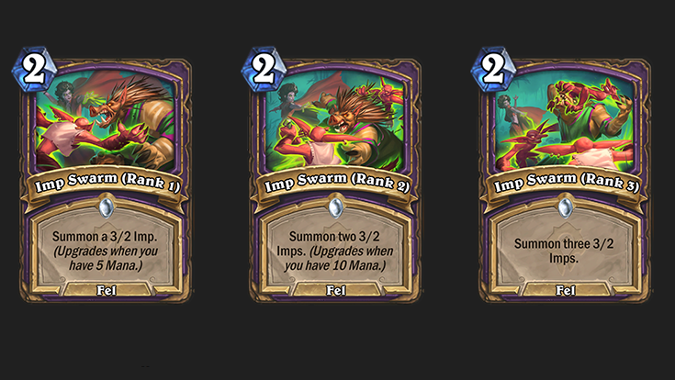 Ranked spells give players options at every stage of the game

A spell’s mana cost determines where it fits into your game plan. Big spells with huge mana costs are late game powerhouses, but they sit dead in your hand if you draw them too early. Ranked spells solve that problem because they upgrade at 5 mana and 10 mana.

Imp Swarm is a 2 mana Shadow spell for Warlock that a 3/2 Imp (Demon) minion. Not a terrible play for 2 mana. It’s just 1 mana more than Flame Imp and doesn’t require you to take 2 damage. Once you have 5 mana, the spell upgrades to Rank 2. Now for 2 mana, it will summon two 3/2 Imps. At 10 mana, it upgrades to Rank 3 and will summon three 3/2 Imps. Instant board, just add water, and a dash of Shadow magic.

Chain Lightning is a 2 mana Nature spell for Shaman. It deals 2 damage to a minion and an adjacent one. They didn’t show the other ranks, but it will likely either do more damage or (more) likely hit additional minions at higher ranks. 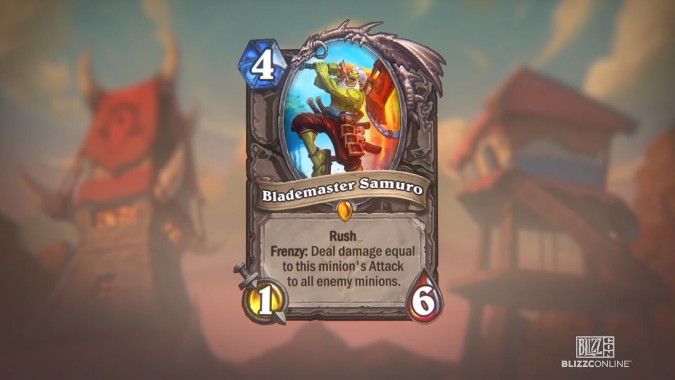 The new Frenzy keyword, like Enrage, activates when your minion takes and survives damage.

Blademaster Samuro, last seen as a character in Warcraft III, is a Legendary Neutral minion with Rush and Frenzy. This pretty much guarantees his Frenzy will always go off. His Frenzy effect is to deal damage equal to his attack at all minions. The only problem is, he only has one attack. The developers mentioned they would once again be trying to revive the hand buff mechanic and Samuro seems like a card that would fit a hand buff type of deck well. Whether they can make hand buff actually competitive this time remains to be seen.

What would the Barrens be without the very backbone of the Horde, the Peon? This a Neutral 2/3 minion with a Frenzy effect to add a random spell from your class to your hand.  A 2/3 for 2 mana is already a strong play even if the effect never goes off. Whatever random spell you get from it is just a bonus.

Druid of the Plains is a 7/6 Beast minion for Druid. It’s Frenzy effect is to transform into a 6/7 Kodo with Taunt. It doesn’t have Rush so unless you opponent doesn’t deal with it after it hits the board, you’re unlikely to ever get the 7 attack off. A 6/7 Taunt is still nice minion, but for 7 mana, the cost is a bit steep. 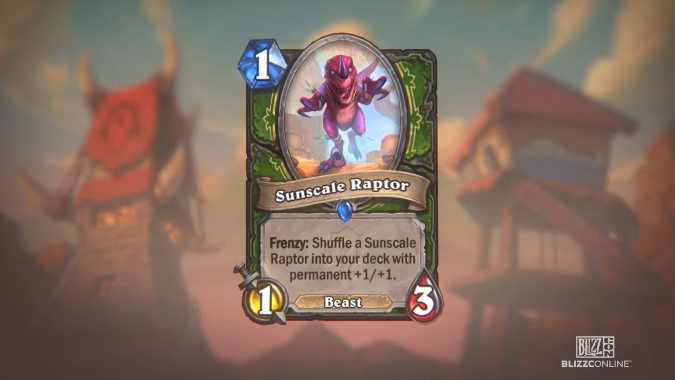 The inhabitants of the Barrens are represented, too

We’re going to see a ton of Quilboar minions in Forged in the Barrens like Razormane Raider. This is a Neutral 5/5 with a Frenzy effect is to attack a random enemy. Potential targets include the enemy Hero.

Frenzy, ranked spells, and spell schools look to shake up the Ladder in a big way. No release date has been provided for Forged in the Barrens but we should see it soon. Get ready to grab your axe, bow, or spell book and traipse into the unforgiving Barrens. Lok’tar O’gar!

Blizzard Watch is made possible by people like you.
Please consider supporting our Patreon!
Filed Under: BlizzConline 2021, Forged In The Barrens, New Hearthstone Cards, New Hearthstone Expansion
Advertisement