The Queue: In a pickle 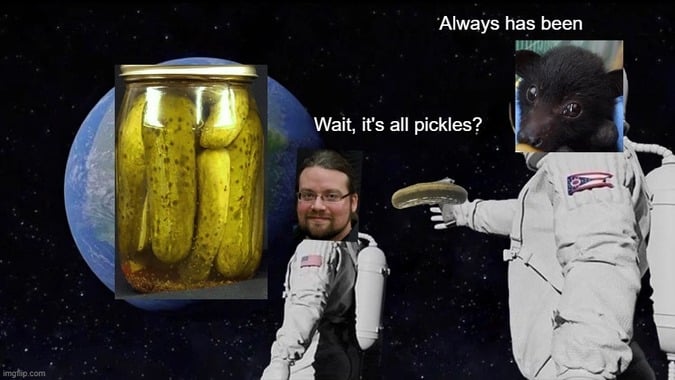 There was just one thing on the Queue’s mind yesterday.

Without further adieu, I take you to — the Pickle Queue.

SOMEHOW, ALL OF YOU

I’m not really a fan of pickles. If we ever ate out at a restaurant together and I had something come with a pickle, I’m the guy asking if anyone else at the table wants one. So I’m with Rossi on this one, keep them off of my bbq sandwiches, but in addition — keep them off of the rest of my food too, please.

In return, I am willing to accept all of your olives.

Mitch, sneaking into this Queue: For the record, I dislike both olives and pickles.

ARTHONOS WON’T GET MUCH CLOSER

Q4tQ: Who had the better show last week, Blizzard or Nintendo?

I’d say Blizzard. I know that Mitch was super hyped for Splatoon 3, especially since last Thursday’s Queue was about it. But for me the whole Nintendo presentation was missing a really big wow moment. Like if they had announced a new Mario Kart? Or if they had announced another wild crossover character, like Master Chief, for Super Smash Brothers. Hands down Nintendo would’ve won. But I gotta give it to Blizzard for the announcement of the Arcade Collection, but that you could play it right then. Then to find out that yes, we really were finally getting that Diablo 2 remaster, and seeing the Rogue in action for Diablo 4. I was a pretty happy camper.

Mitch: Um, wow. It’s called Splathreen, (yes, that’s definitely A Thing™) . That said, I agree here. I loved both — and I think they were fantastic, given they were made in a pandemic — but I really hoped for more out of Nintendo on the Legend of Zelda front. That’s where they lose points for me.

TILL SPENCER MORGAN SACRIFICES IT ALL

I don’t have a Night Elf, but I do have a lady Blood Elf Paladin who I think looks amazing in her plate gear. On the other hand, I wouldn’t say no to more sliders for character creation so I could make much bulkier lads and lasses. Maybe we’ll get that in patch 10.0.

Mitch: I’m all for more customization options, especially if they involved sliders or color wheels… but I highly doubt that’ll happen in WoW, given the age of its engine (or whatever it’s called).

Q4tQ: For non-raiding characters, do you go for the covenant that fits the fantasy or even just your head-cannon, or do you look up or sim which one’s best for your main spec and pick that?

To clarify: I’m not trying to start a debate on what’s the “best” way to do it, I’m simply interested in people’s approach. There’s no right or wrong answer to this, but I’d like to know how you do this.

I chose the Covenant that best fits my fantasy for that class, even on my Raiding characters. I’m looking long term, even if there was a Covenant/Class combination that is 5% better, at the end of the expansion I much would prefer to have spent the time with them where they belong, rather than taken advantage of such a small boost. Ted just wrote a great piece about how most players went for the power choice though, so I guess I’m in the minority. Apparently, only 7% of Guardian Druids went Venthyr — there are dozens of us, dozens!

AND THIS ENO, DEFIES EXPLANATION

QftQ: Brokers vs Ethereals… in a battle to become the most shrewd venture-capitalists in the universe

Hold on to your butts, it’s about to get wild.

There’s no possible way to do a 2BE for this because they’re one and the same. Did I just blow your minds? I know my mind is a little blown right now. In real life, we’ve seen lots of organizations go through restructuring and reformatting over the years. Uniforms get updated, goals get more well defined, Coke becomes New Coke becomes Coke Classic — and so on and so on. I think the Ethereals just saw an opportunity to do the same thing. The Nexus-Princes traded in their crowns for Cartel Leadership positions and they got a hip new look that tested well with interdimensional beings.

Sure we haven’t seen such a drive to collect I Can’t Believe It’s Not Energon Cubes™ from the Brokers — but that’s just a matter of time I’m sure.

YOU’VE ARRIVED AT RIPTIDEZ STATION
did it come up at all during blizzcon if the next patch will let us skip the maw opening experience for alts?

Unfortunately, it didn’t. For the time being it’s looking like you’ll still have to trek through the Maw on every alt you bring to the Shadowlands. Other expansions have eventually allowed players to skip the starting quest experience, cross your fingers super hard that this winds up being one of them. Every time watching Thrall be just so extraordinarily picky about what kind of weapon he wants to use — all while Baine is fighting for his life! C’mon Thrall, focus up!

At least we wind up unlocking mounting in the Maw in patch 9.1. Hopefully, it will be something that’s account-wide so your first trip through can be a little faster.

Please give me your olives, I really do like them. But also don’t spend all of today talking about olives — make sure to leave some actual questions for Liz too!

Blizzard Watch is made possible by people like you.
Please consider supporting our Patreon!
Filed Under: So Many Pickles
Advertisement