Hearthstone Rewards Track gets an overhaul in Forged in the Barrens, featuring brand new Diamond Cards 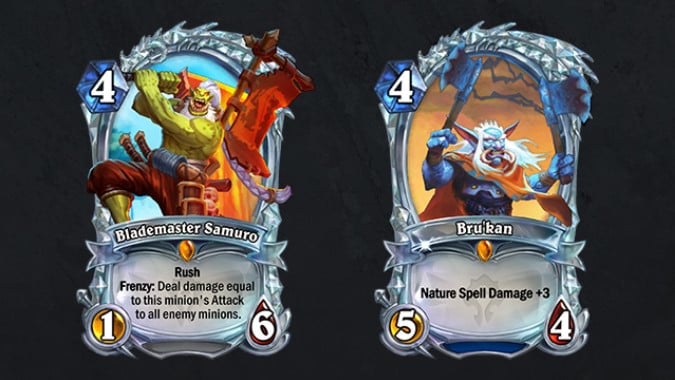 Diamonds are a Hearthstone player’s best friend, so it’s a given that Diamond cards would be super cool rewards, isn’t it? Well, that’s about to become a reality pretty soon with the brand-new Diamond Cards coming with the Forged in the Barrens set, which goes live on March 30. These cards have a neat entrance animation, and some super snazzy Hearthstone-themed art that is literally popping out of them.

At the moment, we only know of two cards that will get these super-special, cooler-than-golden versions: the new legendary minions Blademaster Samuro and Bru’kan. The former will be obtained by purchasing the brand-new Forged in the Barrens Tavern Pass, while the latter will be a reward for an achievement for collecting every Legendary card in that set.

Hopefully there will be more! These cards are definitely very cool-looking, and it would be nice to be able to see every new Legendary card, at least, get its own Diamond version that players can somehow obtain and add to their favorite decks.

Read on to find out what else is changing with the Rewards Track in the Year of the Gryphon — and it’s all good news. 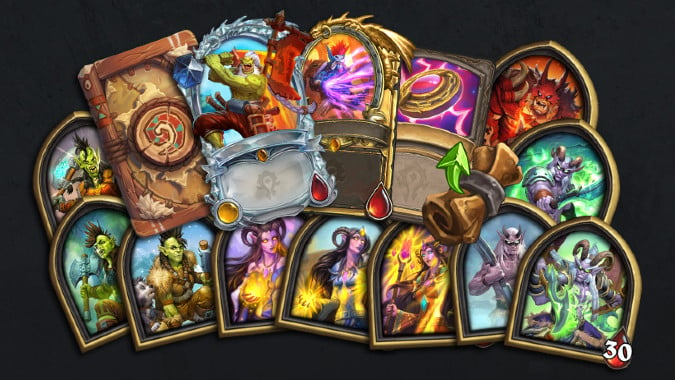 The Rewards Track is leveling up: Level 100 is the new level 50

In a very welcome change, the XP required to reach every level on the Rewards Track is being cut in half while the overall number of levels is being doubled. The overall size of the Rewards Track will remain the same, making the rewards for each level smaller,  but you’ll get rewards more often. Basically this makes smaller play sessions more satisfying: even if you have limited time, you’ll be able to log on, do some quests, and get a reward, because you’re more likely to get enough XP for a level up. Even though the rewards are smaller, this makes for a better play experience.

But we’re also getting more rewards overall. The official blog with all of these changes has a very handy table that clearly illustrates everything that we will be earning upon leveling up on the new Rewards Track, as well as an illustration comparing the total number of goodies from the previous (Darkmoon Faire) version of the Track with the new (Barrens) Track. The total amount of Gold will be the same — 5,650 — but the Barrens track will offer one more card pack, one more Tavern Ticket, a non-disenchantable Legendary, and 14 other non-disenchantable Golden Cards, on top of everything the last Rewards Track offered.

Read the official blog for all of the details on the revamped Rewards Track, including a bunch of new cosmetic Coins (if you care about that).

Blizzard Watch is made possible by people like you.
Please consider supporting our Patreon!
Filed Under: Diamond Cards, Forged In The Barrens, Rewards Track
Advertisement