How Spell Schools could change Hearthstone 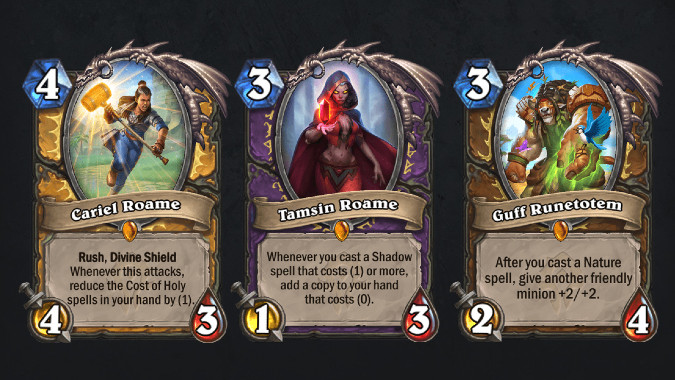 Spell Schools are coming to Hearthstone, and based on the card reveals from the Forged in the Barrens set, we can see how this new mechanic could change the game, even before we take our new cards for a spin. It’s time to take a look at which cards have been released so far that make use of this mechanic, and how they can potentially spice things up.

To start us off, the new Druid legendary, Guff Runetotem, will buff other minions whenever a Nature spell is played. Hearthstone designer Celestalon himself had something to say about this mechanic:

Oh, and Guff has been revealed! Guff is such a sweetie. Another of our Horde Mercenaries!

In terms of gameplay, you'd probably want to play all the Druid Nature spells you can with him!

Paladin is getting some Holy spell synergy with cost-reduction on their new Legendary Cariel Roame, and the ability to summon minions with Lifesteal on the new Veteran Warmedic card. This can also be extended by the neutral card Spirit Healer, which has obvious synergy with these Paladin effects, but could also be employed by Priests.

Despite the shared family name, we don’t know yet how the Paladin Legendary Cariel Roame is related to the new Warlock Legendary, Tamsin Roame; but we do know that they both share an appreciation for Spell Schools. In the case of the Warlock, she creates copies of the Shadow spells you cast that cost (0).

The new Shaman Legendary Bru’kan — who is already confirmed to have his own Diamond Card variant, by the way — has a whopping Nature Spell Damage +3 effect, being a very obvious finisher for spell-based Shaman decks.

In this case, it’s interesting that his spell damage would only apply to certain spells — lightning-themed ones instead of lava-themed ones, one could imagine, which is probably why the developers felt “safe” adding so much spell damage increase to him: They can clearly tell which spells will be “allowed” to deal crazy damage, and which ones won’t.

Which segues us into asking another question… 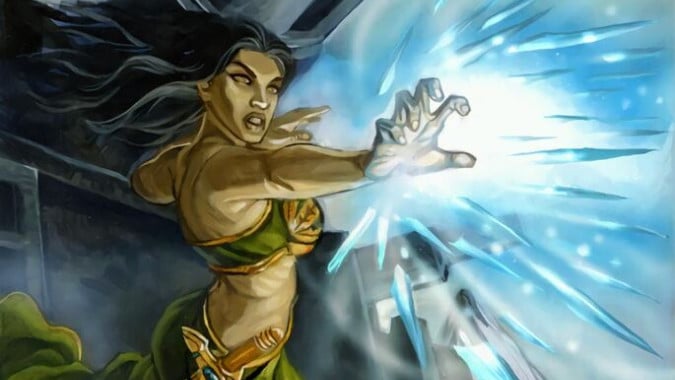 How will the older spells work with their new Schools?

There’s also the looming question of how the older spells — which have been retrofitted to have Schools now — will play out differently. Based on the information of which cards are no longer going to be on the Core Set, we can imagine that certain old archetypes like Freeze Mage are being abandoned for the time being — at least in their previous forms — since a lot of their staple cards, like Frost Nova and even Frostbolt, are being cut.

Much like the Shaman Legendary Bru’kan above, there could be a new Mage minion that increases your Fire Spell Damage or your Arcane Spell Damage, potentially creating brand new archetypes.

In the past, a minion that simply increased Spell Damage in general — like the old version of Malygos — was dangerous. So many decks, from Druid to Rogue to others, had Malygos as a cornerstone of their battle strategy because the dragon could buff even otherwise “weak” spells like Moonfire and Sinister Strike to crazy levels. Which, in turn, prevented the designers from adding too many cards that had those kinds of effects, lest they ended up completely breaking the game by accident.

Not anymore: the idea of increasing the Spell Damage of only certain Spell Schools, combined with the fact that a few spells don’t even have Schools at all, makes this specific design space much more manageable.

The designers can now come up with cool special effects that are only activated by cards of a certain Spell School — which would allow them to rein in the power of those effects, making it easier to block unexpected game-breaking effects. We haven’t seen much when it comes to randomness with Spell Schools yet — but this is Hearthstone we’re talking about, so that should always be a possibility.

Finally, there is also the potential for more localized, small-scale synergies that don’t rely on Spell Damage, but only on the Spell School itself. We could end up getting cards that have effects like “Discover a Fire Spell,” or even crazier things such as “Spellburst: cast a random spell of the same School.” I’d say it’s only a matter of time — and it’s definitely fun to think about the possibilities.

Blizzard Watch is made possible by people like you.
Please consider supporting our Patreon!
Filed Under: Hearthstone Cards, Mechanics, Spell Schools
Advertisement