The Queue: Another day, another shipwreck

QftQ: Are we really getting the authentic Burning Crusade beta test experience if the Fel Reaver is neither a cube nor a bear?

Currently on the beta, Fel Reaver has his full model (and looks gorgeous on my new computer). In the early part of TBC’s original beta, Fel Reaver was a cube, and then later on a rather ordinary looking bear (which Joe and/or Rossi told a hilarious story about on the podcast).

Sometimes you just can’t go home again, no matter how hard you try.

2BE: one Fel Reaver-sized bear vs. 25 bear-sized Fel Reavers

The Legion’s terrifying technical acumen is more than enough to overcome a single giant bear. Fel Reavers all the way.

Q4tQ I just had a guild member send me the Taliesin “Why I left my guild” clip – basically it was over people being cut from raid – one of the things he discusses is progression to allow a guild to claim a kill vs progression as a team and achieving things together. What’s your thoughts on Success at any (social) cost vs We’re all in this together?

It isn’t worth killing a boss unless you do it alongside people you enjoy spending time with. I firmly believe that World of Warcraft, as a game, is far more about the social scene than it is about gameplay. That’s why we’ve continued to log in for the past 16 years. It’s not because the gameplay is always great, it’s not because there’s always something new to do, it’s not because of the expansive world and story. If you’re here, reading this, there’s a good chance that you’ve played World of Warcraft to death. Over your career, you’ve probably played every class, run every quest, gone through every dungeon, and explored every last corner of Azeroth and beyond.

I do think that in order to make sure you’re killing raid bosses, you need to set some guidelines to ensure that everyone is on the same page and putting out the kind of effort needed to kill those bosses. That can sometimes be a difficult balance, but it’s possible and, I think, necessary. Because killing dragons doesn’t matter unless you’re doing it alongside friends.

That’s it. That’s the game.

What are your thoughts on the new price model for non-subs?

Favorite/Least favorite part about being Horde?

What is the first thing you will do when you can fly?

(1) I think that this will effect a small percentage of the gaming population… but those it does effect it will effect badly. I’ve already heard stories of players who are going to drop because their financial situation is such that they can’t pay for 60 days of gametime at once, or risk an extra charge on their card to keep a subscription. I’ve heard from a lot of people who would like to be able to gift 30 day subscriptions who now can’t. (You can gift Blizzard Balance, but you have to be friends on Battle.net, so you can’t do it quite as casually.) So for most of most of us, myself included, we probably won’t see much change… but for some small portion of the population, this is a tough change.

(2) Favorite part: playing with my friends. Least favorite part: being required to commit war crimes at least once an expansion.

(3) Kill the week’s world boss without getting lost along the way.

Are you enjoying the new Hearthstone patch and if so, what have you been doing?

I logged on and wasn’t really sure what there was to do. I checked through all of my achievements and collected a bunch of golden cards (not sure what to do with them, either). I played one game of ranked and lost to that particular kind of jerk that spams the “wow!” emote when you’re losing. (So I, feeling extremely petty, waited out to the end of the turn timer every turn. They still won.) I clicked on the Classic option and considered it, but I’d have to come up with a deck to play first.

That’s frequently my problem with Hearthstone: the opportunity cost that comes with “I would play, but I need to build a deck first.” Or build a new deck. Or revise a current deck. (I haven’t tweaked my Paladin deck in a while and I think it shows.) I’m not even sure where to start with Classic, and I would have to do research on decent decks and decks I had the cards to build before I could even start to play. And sometimes I don’t have the time, energy, and brainpower to invest that kind of effort. It’s why I like non-constructed options, like Brawls, Battlegrounds, Duels, and single-player adventures. Even though they have their own issues, when I feel like playing I can just start playing.

So, really, I’m neither here nor there on the new patch.

Are headpats best when meeting a new dog? butt scratches? simply petting from neck to tail?

Q4tQ: how am I supposed to get any work done when there’s a ship stuck in a canal?

Just like the rest of us, you do your best.

That’s all for now, folks. Have a good weekend, take care of yourselves, and tell your loved ones that you love them. And just remember… 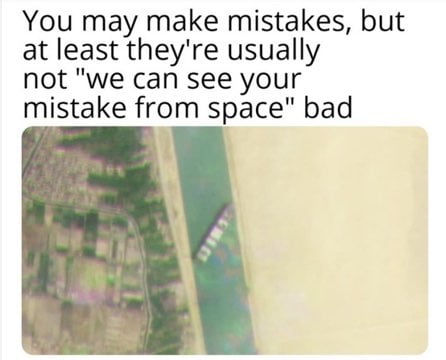 I’ll see you all next week.