The Queue: Fooled you! 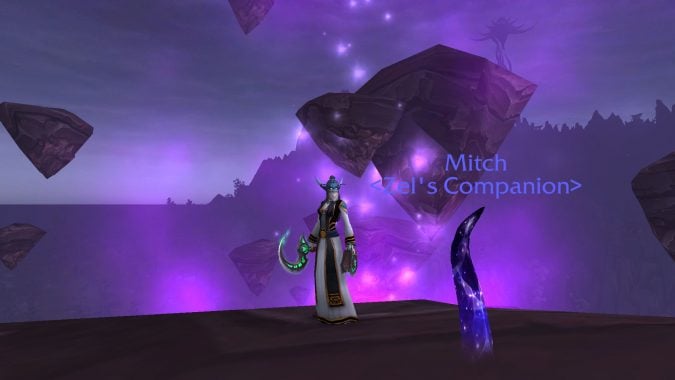 Hah, you thought it was Mitch — but it is me, Cory! Bamboozled again!

Oh wait, I’m being told that April Fools was last week. Jokes on me I guess!

While I learn to read the calendar better, I take you now to — The Queue.

Q4tQ: If the next expansion is the speculated Cosmic War, how would you feel if it kicked off with the reveal that the Void’s opening move was to utilize players to infiltrate the other cosmic realms? So far Shadow Priests and Xal’atath have brought the Void to the Emerald Dream (Life), to the Seat of the Pantheon (Order), and an even larger contingent of players brought the Void to the Shadowlands (Death) via the Gift of N’Zoth. Would this narrative go over well? In the past players have been annoyed by the troop of us doing stupid things unwittingly, but in this case it would be pinned on players who willingly chose to seed the Void across the cosmos, like some kind of chaos aligned Jonny Appleseed.

I love it. It’s entirely a player character thing do to, just us tracking mud all over the cosmos. MOTHER would be so upset.

The Shadow Priests would have a pretty big hand in dragging the Void everywhere, but right alongside that is all of the Warlocks bringing their demonic taint with them wherever they go.

But I don’t think our Gift of N’zoth would be to blame, even though I’ve never taken mine off. It’s never shown up in Shadowlands because clearly, we’ve definitely 100% killed N’zoth. So let’s blame any Void or Fel incursions on all of those Warlocks and Priests actively summoning those forces into the afterlife.

SIBYLLE THE SHIP IS WAITING

Q4tQ: Which WoW race (maybe playable race?) do you think would be the most likely to have a thriving/normalised LGBTQ+ culture?

I’ve always thought the trolls look fairly laid back and I could easily see their tribal structures embracing variety in relationships, gender and sexuality.

I really like the Undead for this. They’re already (un)dead, love who you want! Plus think about how easy it would be to change how you identify as an Undead. Just make the body that you’ve always wanted.

I only learned today that the pandemic has caused a nationwide ketchup shortage.
Heinz has a plan to address the issue.

I sure hope they can catsup with demand!

Q4tQ Do you plan on watching the Diablo 2: Resurrected technical alpha streams on Thursday?

Yeah, I’m really eager to see it in action beyond the screenshots we’ve seen. I’ll be tuning in to Jhow’s stream and watching all of the action unfolding there.

I really like the look of D2: Resurrected but it also makes my brain hurt. I see all of the old UI elements with the fancy new graphics and it just tweaks something in my head that thinks it shouldn’t be.

Q4TQ: would you prefer to have smaller, constant patches that each add a single piece of content (i.e., a raid, or a dungeon, or a new zone, or a new BG, or a new feature) instead of having big patches full of multiple types of content, but with a wait of many months between them?

I like the big event patches, but maybe that’s because we’re just so used to them. I certainly see the appeal of being able to jump everything forward all at once. All of the item levels and Conduit levels and whatever else just bump up together. Nice and easy to balance.

I wouldn’t mind smaller releases of things as they’re ready, it would help spice up the interim content. But for the most part, the releases in past expansions have been just about the right pace. As I’ve started getting antsy they’ve got the next patch ready to go. My guild hasn’t completely cleared a Mythic tier so there are always raid fights to progress on.

But I can understand why so many people are dissatisfied with the current patch drought. Personally, knowing that Sylvanas is going to be in the next raid tier, I really want to get there.

RJAGODA IS NOW IN ORBIT

What was your favorite patch, and why? For some reason I vividly remember 2.4 (Sunwell Patch) as being amazing, but I can’t remember why. Cool story, I know

Pandaria is my favorite expansion so far, and this was the best patch in it. Throne of Thunder is a fantastic raid, Enhancement Shaman were in a really strong (overpowered) spot right then, Isle of Thunder was a good zone to hang out in, and this cinematic! I’ve watched this cinematic so many times, I love the narration rhyming by Lorewalker Cho.

FAR BENEATH THE SHIP THE WORLD IS RETPALLYJIL

Q4tQ: Do you think it’s time to relax type restrictions on transmog? Because I really want my gloves that match my boots :(

I think we’d all love it if they did this.

But I can’t see them ever relaxing the restrictions to a point where you can use multiple armor types between cloth/leather/mail/plate in your transmog set up. It feels like too much of a hardline stance for them to say that Paladins shouldn’t ever use Warlock armor in their looks. No matter how cool it’d be to see a Paladin with the grubby face tentacles from Dragon Soul.

Have a good weekend everyone! I’ll see you next week! (Or will I?)