The Queue: Giant lizard vs monkey 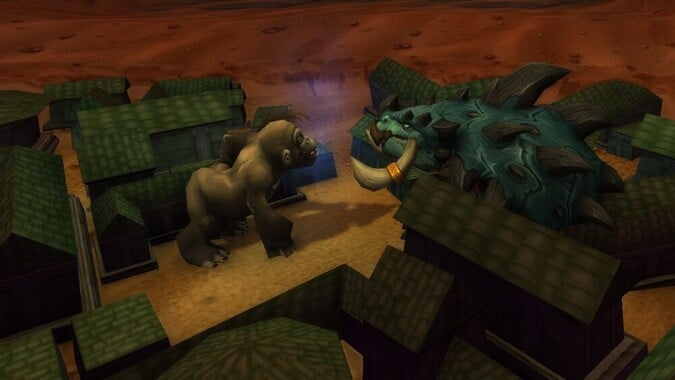 Man, that would be a really great idea for a movie huh? They could have a knock-down brawl in the middle of cities while terrified civilians scream their names and run away. Knowing Hollywood though they’d probably mess it up by including too much time spent with ordinary humans when all the audience really wants to see is the giant monsters.

While I double-check to see if anyone has done this before, it’s time for — The Queue.

Q4tQ: do you think transmog is real in Azeroth?

I know there are separations between gameplay and lore, but Azeroth is a world steeped in magic, and its use seems to be pretty commonplace. So it makes sense to me that people would learn to use magic not only to enhance their clothing, but to make it look like something completely different. Yet I don’t know if this has ever come up in lore outside of the occasional disguise spell.

Maybe the Ethereals and Yakbound Grummles just don’t like the non-players and won’t transmog anything for them. It could also be that enchanted clothing is more trouble than it’s worth. For the average person, that might be a pretty big expense to just make your everyday outfit look different. You might as well spend that gold on a new outfit. I’d imagine that if anyone in Warcraft was just changing their looks all willy-nilly it’d be someone like Kael’thas or Medivh — the really vain magical people.

Does anyone here use both Altoholic and SexyMap? I can’t get the Altoholic button to disappear and I’m wondering if there’s a workaround besides turning it completely off. I’ve posted on the addon page but I haven’t gotten any replies.

I don’t personally use Altoholic — there’s no way that I want to see my /played time across all of my characters — but I might have an addon for you to try. I use HidingBar for all of my minimap button decluttering needs. I like it because I can get it through the WoWup client, and it actually has managed to collect all of the buttons and keep them off to the side. Plus you can set it so it disappears until you put your mouse in just the right section of your screen.

SO SET THOSE JALAMENOS UP HIGHER

A moment of silence for Jalamenos’ secondary monitor.

THERE’S A THOUSAND PRETTY PETER LAKATOS WAITIN’ OUT THERE

Help me Queue! Whenever I play my warrior, I feel like something is not clicking for me and I wish I had some DK abilities and flare. But when I play DK, I miss the big chunky hits of Arms, and I miss Heroic leap and Charge….and I keep doing the pendulum between 2 characters, but I only want to focus one…its a nightmare…Any suggestions?

That’s the problem with Heroic Leap, it’s really fun! There are other classes with similar abilities but none are quite as good feeling as Heroic Leap. Sorry, grappling hook Rogues and Hunters.

If you’re wanting to stay in a Plate class but want more mobility and flair than a Warrior, you could do Paladin. Divine Steed is a very big wow moment of mobility, and Divine Storm is very shiny.

If you’re not married to the Plate class you could also check out Druid, Demon Hunter, or Enhancement Shaman. Each of them can be played as melee, has a variety of quick charge abilities (or speedier movement forms) and some big flashy spells. Personally, I like Druid the best, because being a big old bear is a very satisfying feeling, but maybe you’d vibe more with a Demon Hunter and blasting people with giant eyeball lasers.

AND THEY’RE ALL LIVING THE ZUEL MAY CARE

QFTQ: frostmourne, shadowmourne, kingsmourne. what other nouns can we mourne with our weapons?

What can’t you -mourne! Dragons, chairs, Gnomes, Dwarves, Orcs… honestly we’re spoiled for choices. But have we considered what would happen if the Jailer had gotten his hands on someone like Hamuul Runetotem instead of Anduin? I’d love to see Bearmourne. Give me a fully armed and armored bear etched in glowing sigils. As long as they added a toy or an item that dropped for Druids from the eventual Hamuul Runetotem fight so that I could get that look for myself.

You are given the opportunity to ‘reset’ WoW and start fresh.

What game systems would you bring along, bring back, or create new? What are your core classes and their mechanics?

Well, I like most of the things that Warcraft was doing in Legion — so let’s build from there. Keep all of the classes we currently have, add in Tinkers as another Mail class, and give Warriors a true fourth Gladiator spec so they can finally go back to the glory days of Warlords of Draenor and damaging people with their shields out.

Build the game with more class-specific story-telling alongside all of the major events. Similar to how KOTOR does it. I want to really feel like all of the Druids are working together on something important while we’re all fighting the big bad. And I would add a few new playable monster races, like Gnolls and Dragonkin. Gnoll Druids would be amazing.

I’d also make sure to build in a housing system from the ground up. Just borrow the Wildstar system for the most part. That was some quality housing. I certainly wouldn’t make housing plots limited like a certain other MMO that we all know. Who thought that was a good idea?

I don’t think I want a straight-up return to talent trees, but an expanded Glyph system so that you could build up abilities without needing specific legendary armors. Maybe some sort of paragon point system so that as we get into more expansions you’d have access to expanded oomph with all of your abilities. With more cosmetic glyphs too, so that you could have Bronze Mages whose abilities all look sandy or Druids of the Flame.

Back-to-back Queues, hope you’re not sick of me yet! Have a great week everyone and don’t forget to leave lots of questions for whoever is tomorrow. It’s probably not going to be me for a third day in a row… or is it?