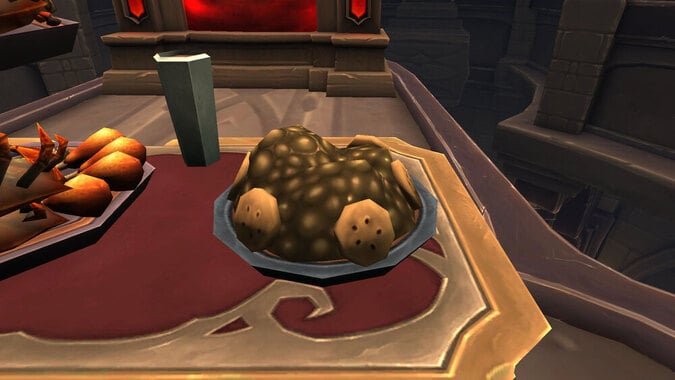 While looking at the Surpringisly Palatable Feast in raid after our most recent Lady Darkvein wipes — 4% we’re so close, just need that perfect pull — I noticed what can only be the Banana Beef Pudding on the end. I wouldn’t say it’s the most appetizing-looking thing on the feast, but it does stand out.

While I try to figure out if I want to take a bite, it’s time for — The Queue!

OI! GLOWING METEOR CARROT NICKED MY PUDDING, AND I SAID

What’s the longest boss fight you’ve had to endure?

What a long long fight. I know that the king of long fights is Illidan, but I wasn’t playing during the back half of Burning Crusade. But Arthas has his 15 minutes enrage timer and I remember bumping into that a couple of times on 25 man difficulty. You really felt those wipes in the final phase when someone dropped their Defile in the wrong place.

Unless you were talking about what boss fight took my guild the longest? In which case it was Heroic Kil’jaeden in Tomb of Sargeras. It took us 146 wipes before we were able to get our first kill. His combination mechanics where you’re constantly in motion, but also people can and will get knocked off if they’re not positioned properly really tested our coordination.

Blizzard really broke the mold when they made Kil’jaeden. I can’t think of a raid-ending boss in the last four expansions that comes as close to as difficult as he did. Lei Shen and Jaina both are stand-outs difficulty-wise, but even they weren’t as big jerks to us. It was super satisfying to finally get the victory on him.

Lucky for me I can relive that memory any time I want. We had a raider who also recorded and uploaded our first kills to Youtube. Watching it again just now made me feel pretty proud of my ragtag team of raiders. (Although I still think he should’ve gone with whatever my music suggestions were for that video.)

Q4tQ: Does it bother you like it bothers me that there appear to be dead, withered Tirnenn all over Maldraxxus?

They’re not dead, they’re just resting. I bet if we got them some nice clean Ardenweald water and put them in a nice sunny spot they’d perk right up.

I don’t think it’s something that Maldraxxus was a land that was green and good until the Primus arrived, so I’m not that weirded out by them. Instead, I just assume they’re spoils of war — much like the dead Kyrians are. Somebody in the House of Constructs or Plagues was going to make such wonders from them.

OI! KALCHEUS NICKED MY PUDDING, AND I SAID

The OG Gelatinous Cube is my pick. It’s that lime green jello color, fits perfectly into most dungeon rooms, and has doomed many an unwary traveler. The others all have their charms, but none are the total package like it.

I like a nice butterscotch pudding. Especially if you add some salted caramel. It really elevates it to a whole new level.

I’ve never been a fan of the bread or rice puddings. It’s a texture thing, they’re not the right kind of goopy.

OI! ARTHONOS NICKED MY PUDDING, AND I SAID!

Q4tMitch: today I discovered there is a twist on the Hot Toddy call the Winter Julep, which swaps honey for demerara syrup and adds peppermint tea. Since you are one of the few people I’ve heard recommending a Hot Toddy, do you think this variation sounds good or bad?

I’ll admit this isn’t a very good question, but work was bad enough to drive me to mix a drink for dinner, and I can’t think of anything WoW related to ask.

Well, I’m not Mitch, but I do also recommend Hot Toddys. They’re warm and delicious and make you feel warm inside. I just don’t know enough of what demerara syrup would taste like. After looking it up, I can’t see why it wouldn’t work. Caramel and Honey are both delicious thick sweeteners, and the peppermint would give it a nice balance.

I hope that your day today at work was better and rather than being driven to drink you can enjoy a nice drink because it’s delicious!

Q4tQ: what minor cosmetic changes would you like to see more games make available?

I mean it generally, but I started thinking about it when I realized I don’t know of any game that lets you choose to be right- or left-handed. I wish WoW had that option – I’m left-handed, and it would be nice to be able to make my characters the same. I know that for some games, choosing that could change the gameplay – I don’t know much about Souls-like games, but I’m guessing that for some, blocking from the other side would change boss strategies or something.

More bear options for forms. Why can’t I be every kind of bear that already exists in-game? I’m not saying that I’d 100% make myself a zombie bear, or the bear with the mushrooms growing on its butt right away, but I’m not not saying that.

I guess the minor change I’d most like to see is more character customizations not being gender-locked. There are some amazing Zandalari lady hairstyles that would look right at home on my dude — and vice versa.

Have a great Thursday everyone! Remember to leave lots of questions for Liz tomorrow, and if you’re going to steal someone’s pudding — don’t steal it from someone who could write a catchy song about it.

Blizzard Watch is made possible by people like you.
Please consider supporting our Patreon!
Filed Under: You’re All A Bunch Of Pudding Thiefs
Advertisement