The Queue: How did we get here? 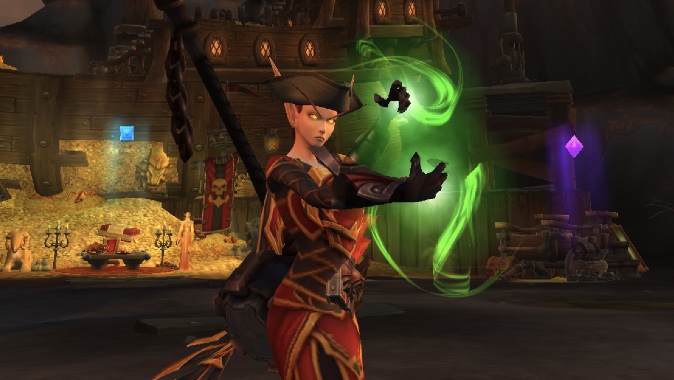 Really, I have no idea how it’s Friday. What happened to Monday, Tuesday, Wednesday, and Thursday? Where did they go? How did we make our way to this point in time while skipping the intermediary days? It’s a real puzzle.

But since that’s a puzzle I can’t solve, let’s go on to answering some questions, shall we?

Q4TQ: How goes Denathius progression, what is your favorite nickname for Denathrius and why is it Daddy D?

Not well. I think we’re up to 115 pulls or so on Heroic Denathrius, and I am so ready to kill him and never go back. We’re making progress in phase 3, but we’re not there yet.

As to nicknames, I not a fan of how Denathrius, who’s a straight up abusive boyfriend trope, is taken by the community to be the game’s ultimate hottie. “Crawl to me on your knees! Scream for me!” Uh, yeah, no thanks, and I’m tired of hearing all of his voice lines and the jokes around them.

Denathrius is a character I might appreciate more if I didn’t have to hear him extolling himself and blaming you for him having to hurt you over a hundred times. Some characters have voice lines that are a delight to hear over and over again. Denathrius I disliked at first and I’m presently at straight-up loathing. If this scene and dialog played out once in a quest, I think I would have appreciated the skill with which the voice actor is playing up Denathrius’ role — he is toying with us and the whole raid for him has been a ruse, a way to distract us from what’s really going on in the Shadowlands. He’s over-dramatizing everything, but intentionally and with character. When I think about it from this perspective — and it isn’t raid night — I appreciate the quality of the performance.

So… okay, back to the question. The only good nickname for Denathrius is dead. I can’t wait to never hear his smarmy voice again.

If I absolutely hate Shadowlands in 9.0, is there anything that would make it worth coming back for 9.1? Or should I just wait until 10.0?

Yes. I’m of the opinion that it’s always worth coming back for a major patch, even if you haven’t entirely been enjoying the expansion. I think Blizzard is very good at story content. The quest lines in Shadowlands have been fun, and going through the Covenant story has been interesting. (Even if you aren’t your Covenant’s biggest fan, such as my antagonistic relationship with the Kyrian.) A major patch will always give you another burst of quests, stories, and cinematics. That’s the good stuff, in my mind.

Even when the between-patch game feels like endless grinds that get you nowhere, the burst of new contents always just fun. At least for a while.

In 9.1 we’ll get new Covenant stories. We’ll invade the Maw. We’ll overrun Korthia. There will be lots of new and interesting things to do, and I think it’s worth picking up the game to check it out.

But all of us have our own kinds of fun. If you really do just loathe patch 9.0, this is an extension of that — so it’s possible that skipping over it is a better choice. But only you can say for sure whether it’s worth it.

Q4tQ: If the Shade of Xavius, who, per Xavius himself, had only 1/10th the power of Xavius was able to capture Malfurion, does that mean a 10-man raid defeating Xavius indicates every player is stronger than Malfurion?

Yes. That’s it, that’s the answer.

Well, it’s most of the answer. Malfurion was captured due to his own foolishness — he ran off in anger, without planning or preparation or safeguards. He was an easy target, and likely Xavius planned it this way, allowing him to catch Malfurion both angry and alone. It gave him an edge to capture Malfurion.

This implies that the Shade of Xavius perhaps couldn’t have bested Malfurion in a straight one-on-one fight, or at least wasn’t confident enough in his ability to do so. Which in turn implies that Malfurion is at least some amount stronger than Xavius. That could still mean we’re more powerful than Malfurion, but maybe not as powerful as it might seem from this example.

Q4Liz: should WoW retcon the Draenei racial mount to Talbuks instead of Elekks, without any explanation? Should we just wake up one day and find a shiny new Talbuk mount taking the place of a respective Elekk, while Blizzard fiercely denies that Elekk mounts have ever existed outside of non-racial mounts, and we must all be collectively delirious to think that was ever the case?

How do you know that this hasn’t already happened?

My dog Pokey. Who definitely exists, no pics needed. Occasionally gets snappy without apparent cause. Typically while lifting him from one of his usual ‘nests’. The spray bottle helps, but pushes him to run away and hide for time. What do I do?

Sometimes dogs just don’t like doing things for whatever reason. My parents have a dog who absolutely refuses to be picked up. She just fusses and squirms and whines and will eventually jump out of your arms — she’s a mutt the size of a large chihuahua, and she’ll take a flying leap from your arms even if you’re holding her at chest hight. She really doesn’t like being picked up, and there’s no dissuading her. Abby also doesn’t tend to like being picked up — she won’t growl or snap, but she will grumble about it, sometimes loudly. There is no mistaking her displeasure, though she is usually soothed with a treat.

I would advise taking a different approach. If you want Pokey to leave his favorite nest of blankets, work on calling him to you instead of picking him up and forcing the matter. Offer treats and pets and praise when he comes. If he won’t come, try a trail of treats away from his nest. Take a few steps back and maybe hold a particularly tempting treat in your hand, or a favorite toy. The goal is not to take him out of his happy place, but to convince him that leaving his happy place because you call is a good thing and will be rewarded. The key is patience and repetition. Whenever they do something you want — even if you didn’t ask them to! — praise them and pet them. Teaching a dog to sit is a good example of this in action. Whenever they sit, whether you’ve told them to or not, say “good boy! good sit!” and pile on the praise. They’ll make the connection between what they’re doing and the praise you’re giving them until they do it on command.

One big problem with punishing our doggos for misbehaving — even with something as mild as a squirt from a spray bottle or a sharp “no” — is that they may not understand what you’re getting on to them for, and they’ll just be upset or agitated over it. Pokey might not make the connection between the him snapping and you spraying him with with a squirt bottle. When you’re praising them for doing something right immediately after they’ve done it, the message is usually pretty clear.

Of course sometimes that will backfire. Abby always gets a treat when she comes inside from the yard and sits down by the back door. So sometimes when she wants a treat she’ll paw at the back door to tell me she wants out, then turn around and come right back in and sit down, waiting for her treat.

Well, one of us is trained, anyway.

Regardless, it’s a lot harder to make a dog do something they don’t want to do than it is to encourage a dog to do something you do want them to do. If you’re consistent with your messaging, they’ll get it.

I’m not an expert; this is just what I’ve found to be most effective when trying to wrangle a pair of hard-headed basset hounds over the last decade.

And that’s all for what is apparently Friday. Please remember to pet your dogs and count the days of the week, because dogs deserve it and days of the week are confusing. I’ll see you back here next week, my friends.