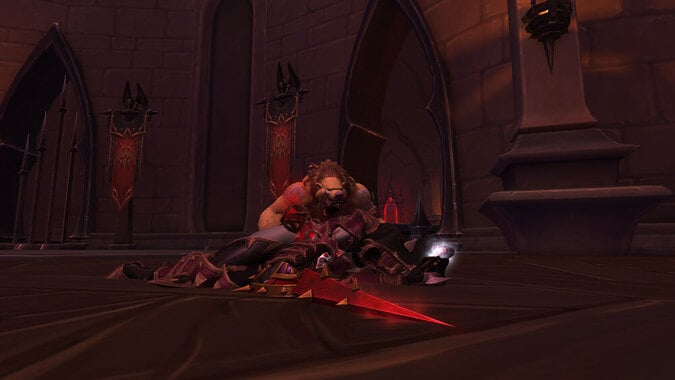 That’s one dead vampire lady! Or is that re-dead? I’m never quite sure what exactly we’re doing to these Shadowlands entities.

After 103 pulls my group finally got our Mythic Darkvein kill. What an excellent fight! Our kill wound up being so smooth that we were all surprised when she was at 3% and about to die. Now we move onto Artificer Xy’mox and dealing with all three of his mechanics at once! So far the outlook isn’t terrible, but also we’ve only seen the Axe vortex a handful of times, and we haven’t gotten the big overlap yet.

While we try and find another Stampeding Roar or two, it’s time for — The Queue.

YOU MIGHT BEEN HURT, MISTAH JAY, THAT AIN’T NO LIE

2BE: Lady Dimitrescu (RE8 Tall Vampire Lady) vs Denny D

In the Mythic Lady Darkvein fight, there’s a new tank mechanic called Hidden Desires. A pair of Anima clones of Darkvein spawn and charge the current tank after a brief second — you have to face your character at them while they’re charging or you take damage and get a debuff. However, my desires for 10-foot tall vampire ladies aren’t very hidden.

RJAGODA HAS SEEN THEM ALL COME AND GO, OH

Question for Monday’s Queue: Do you think Bliz gets too much leeway due to the pandemic for time between patches?

Not in the slightest.

Ion and the team know that this isn’t ideal. Which is probably the worst part of all of this, Shadowlands had a great launch. There was plenty to do, Covenant story to unlock, mounts and pets to tame — and now people are only going to remember the doldrums as we approach patch 9.1.

The last year has been — and continues to be — a huge worldwide issue. Blizzard quickly adopted work from home policies and sent pretty much their entire workforce home. That they acted so quickly when the health of their employees was on the line is a great thing — and should be applauded.

That we’ve got a new expansion, patch 9.0.5, and they’ve got patch 9.1 almost finished from the World of Warcraft team almost entirely in WFH is astounding. They’ve shown that they’re able to put out some fantastic content while working under conditions that nobody has had to before.

Making a game like Warcraft is a huge collaborative creative process and stress is the number one enemy of creativity. It’s not just making sure that all of the employees have access to quality equipment to work from home, and whatever access they need to the main Blizzard servers. It’s working under the stress of not knowing what’s going to happen with your friends and loved ones who can’t do WFH, or worrying about COVID from a simple grocery trip.

That’s not even taking into account all of the new headaches that working from home creates.  Power and internet outages can occur, children are doing remote learning that needs to be guided, and even a simple question can have to deal with lag time in communications. What could’ve been a matter of walking over to the next office and asking a quick question now is an email or Slack message that might not get seen for an hour.

At the end of the day, this is just a game. I’d much rather the employees be given every opportunity to be safe than worry about whether or not a patch is on track for a release.

Qt4Q: Is 33.5 minutes to clear a layer 8 of Torghast “extremely lenient?” (From the wowhead article about Torghast scoring)

With the new changes to the regular layers only having five floors instead of six, I’d say yeah that feels like it’d be more or less what a run should take. That last trash floor before the boss is easily where I’d spend the most time. By then the enemy scaling would’ve caught up to our Anima stockpiles and being unwary could result in surprise deaths. Like when you stand in one of those meteors that you’ve stood in for the entire run leading up to that point — only to have it completely obliterate you.

So as it stands I don’t know if it’s “extremely lenient” but it shouldn’t be as bad as we’re used to.

Keep in mind this is all from my perspective as a tank and I rarely solo a Torghast because I don’t find it as fun. Just like Islands in last expansion, grab some mates and chatter away about the Anima powers you’re getting, or the absurd damage you just did to something.

Running with a tank just makes such a huge difference in clear styles. In another post further down in the weekend’s Queue, you said that you didn’t like to feel like you’re flailing in large pulls. With a tank, there’s no more flailing, assuming that the tank isn’t about to die.

They can take the hits, and gather things up while you do your Moonkin thing where you drop moons on people. Even with taking more time between pulls to collect loot, free souls, or explore for Anima orbs my main Shadow Priest friend and I still move up the layers at a good clip.

THERE AIN’T NO RETPALLYJIL TO WASTE

Q4tQ: Among the other amusing items in Fallen Adventurer Cache boxes (like the remains of an Unstoppable Force, etc) there are two items of especial note:

Shattered Orbiter Crystal, which has a fel green icon, and Charred Dreadplate, which is described as being covered in spikes and was probably jet-black prior to arriving in the Maw.

Gosh, who could those two items have entered the Maw with?

I say after spending many hours thinking about this only to realize you’re probably thinking of Kil’Jaeden, but that’s probably not right because who knows what happened with his Demon-y soul after we beat him up.

The Shattered Orbital crystal makes me think Kael’thas but we have him in Revendreth, and the black Dreadplate makes me think of Arthas — which at least makes some sense. But now I don’t know why you’d mention them together.

What I’m trying to say is: you stumped me — and I’m fully ready to slap my forehead and say “of course!” when someone points it out in the comments today.

THERE COMES A DAY WHEN ARTHONOS WILL BE THE ONE, YOU’LL SEE

Q4tQ: What’s going on? Why am I back in 1999? Where is the nearest Blockbuster so I can print out some of these Pokemon photos?

Well, that depends on how close you are to Bend, Oregon where the last Blockbuster in the world is.

Pokemon Snap is a fun thing to come back though. I’m surprised it took them so long. The first one felt like one of those cult classics that either elicited a response of “huh?” or was beloved — no middle ground.

I hope that the new one is equally befuddling. Just keep Mitch away from some of those Pokemon…