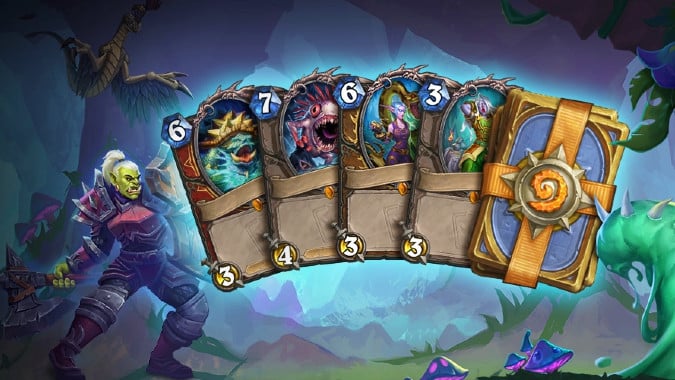 When it comes to any kind of announcement for Hearthstone, we can always expect it to include an amusing trailer, and the Wailing Caverns mini-set is no different. It features those new Mercenaries that we’ve already grown to love, as well as famed Archdruid Hamuul Runetotem and a hint or two about the cards we’ll see in the mini-set.

Mini-sets are now firmly cemented as a part of the content release schedule for Hearthstone. Starting with the Darkmoon Races, mini-set, which came in the Madness at the Darkmoon Faire expansion, we can now expect every expansion to have this mini-break in the middle of it, adding more cards that keep the same overall theme. This serves as a great opportunity for the Hearthstone team to re-balance the classes, as well as double-down on interesting new mechanics that players might have taken to liking.

Just like with Darkmoon Races, Wailing Caverns includes 35 new cards — four Legendaries, one Epic, 14 Rares, and 16 Commons. Buying the mini-set will give you two copies of each non-Legendary for a total of 66 new cards in your collection. This is the kind of purchase where you know exactly which cards you’re getting: no card packs, no RNG. The pricing has also remained the same: you can get the mini-set for $14.99 or 2,000 gold — allowing players to get the new cards with in-game currency is always a commendable practice, and it’s great to see that nothing has changed in that department. And if you don’t want to buy the mini-set on its own, its cards will start showing up in Forged in the Barrens packs.

As for the cards that we can expect to see on this mini-set? Well, from the splash art that illustrates this article, we can already expect to see a version of many of the major figures from the actual Wailing Caverns instance from World of Warcraft — including beloved Giant Murloc Mutanus the Devourer. But since we’re only getting four Legendaries, we’re unlikely to see all eight bosses from that instance. We can, however, already distinguish the silhouettes of the turtle Kresh, the amusingly-named Lady Anacondra, and the druid Naralex himself — the man who, while not a villain, is responsible for most of the distress surrounding that area.

The mini-set comes out June 3, so we’re less than a week away! Mark the date on your calendars, and may you venture safely into the depths of the Wailing Caverns!

Blizzard Watch is made possible by people like you.
Please consider supporting our Patreon!
Filed Under: Giant Murloc, Mini-set, Wailing Caverns
Advertisement