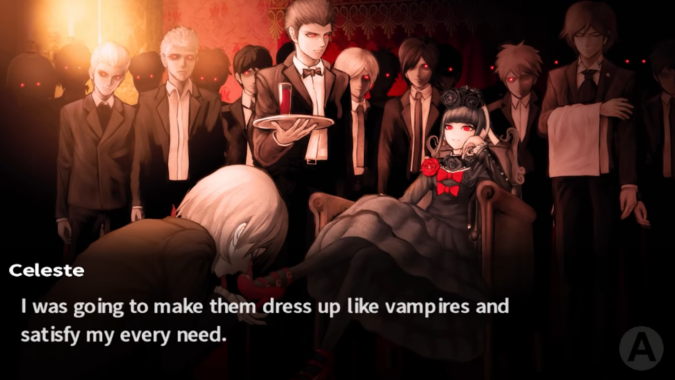 Danganronpa sure is something else.

The game is technically in the “visual novel” genre, but it has so many unexpected, off-the-wall elements that “visual novel” doesn’t seem to do it justice. It feels like Phoenix Wright crossed with Three Houses crossed with… well, a murderous bear (and then some).

I’ve been watching the Game Grumps playthrough of it, and while some moments make it hard to fully recommend — an entire class trial revolves around some very problematic takes on gender identity, for instance — it’s still been quite the trip. I’m going in completely blind, so I have no idea how it’ll all end, but it continually seems to surprise me. I’m curious if any of y’all have played it and, if so, what you thought.

RETPALLYJIL ASKS ABOUT INSTRUMENTS OF WAR(CRAFT):

Q4tQ:
We’ve got 2 guitars, 1 bass, and 1 harp (even if it’s only a toy) that are visible in WoW. Which (if any) other instruments would you like to see?

(I have a fake set of maracas from a matched set of main hand/off hand globe things, but those don’t count)

Oh dang, this one’s hard. There are so many good choices out there. My first instinct was to say cello, because that’s the instrument I played growing up… but there are probably better ones out there.

You know what? Let’s make it a weapon with an on-use that transforms it from a 2H weapon to a 1H weapon, Bloodborne-style — that way, we get two instruments in one item! I don’t know how to piece these together, but I’d pick a theremin and a hurdy gurdy.

CORY KNOWS NEWS IS COMING UP:

What do you want to see from the upcoming Nintendo Direct? Is this finally the year they’ll announce the next Mario Kart?

If we don’t get Breath of the Wild 2 news, I’ll probably cry a little.

But as far as unexpected surprises, I’d love to see more on Splatoon 3 (though I feel that’ll get its own presentation), and I’d be happy with any number of “old” franchises being revived. Earthbound and Kid Icarus seem to be fan favorites, but I’d also love a new Kirby or Star Fox game (assuming they make them exactly like the N64 games I remember because for some reason, they can’t seem to get Star Fox right grumble grumble…)

At the end of the day, if we get substantial news on even one first-party IP, I’ll be happy.

I was always a fan of Red-Eyes Black Dragon, even if it wasn’t the strongest. That one also fits the aesthetic from the header image, so I’m sticking with my good boi Red Eyes.

Q4Mitch: if your girlfriend decided to bake you a WoW-themed cake for your birthday but ended up baking you an Alliance-themed cake, what would you do?

For real, though, the gesture alone would be enough to make me happy :) Now, I’d probably still let her know the Alliance are my sworn enemies and — as one commenter suggested — turn cutting the cake into a “stab the Alliance while I yell ‘For the Horde!’” scenario. But I’d make sure we both can have a good laugh about it and then enjoy some delicious cake.

I wish WoW had pistol model for guns. Could be a new ranged weapon type with a hand crossbow counterpart. Since we do have at least one crossbow model that is so tiny it could be one-handed.

I will be forever sad that Lord Godfrey got to dual-wield pistols and then nothing else ever really became of that setup. It would’ve been an especially fun way to give Hunters some extra love. It doesn’t even have to fundamentally change equipment — make it purely visual, so all the DPS stats are still on one weapon like normal, but you get a “second” weapon in your off-hand slot kind of like how some Artifacts auto-equip something in both slots.

Anyhow, that’s my ranged-weapon complaint for today. I don’t need Blizz to reinvent the wheel, but I will never complain about more visual variety and choice.

SIBYLLE, THANKS FOR THE LAUGH:

So I collected all the ingredients to make him a Delicious Chocolate Cake. I was so paranoid that he might run into me that I flew to one of the remoter bluffs of Orgrimmar to make my campfire and create the thing.

And then with a loud DING! goes the “The Cake Is Not A Lie” achievement in gchat. I keep forgetting that this is a “new” character (I made her when I changed my main from Ally to Horde, same class and spec, just different race)…

This isn’t a question, but I wanted to let you know this made me both smile and laugh (which I needed), so thank you.

Also, that’s a very nice thing of you to do for your guildmate :) Gestures like that are what make virtual communities so special.

ARTHONOS WONDERS ABOUT A DIGITAL AGE OF BLIZZ:

Q4tQ: How would you feel if Blizzard decided to move away from all in person promotional events? So no booth at PAX or other conventions, no esports events, no Blizzcon, just an annual Blizzconline. How would this effect you personally, and (@BW Staff) on professional level as someone who attends these events?

I’d feel pretty dang upset without a BlizzCon, because that’s when I get to see a whole lot of friends. BlizzCon is more about the experience than the news itself at this point. So I’d be very, very sad if they moved to online-only announcements.

Professionally, it would depend on how they space things out. If they still did a massive info dump a la BlizzConline, it would be A LOT of work. It always is, but if Blizz ever were to go all digital — which, again, I would hate — I’d hope they space announcements out more. It makes life so much easier on your tired writers and editors.

To that end, I’d be perfectly fine if Blizz used PAX, gamescom, etc. for announcements. Outside of the timing making life easier, it’s also just a nice show of support for the community to have a presence at these things.

KALCHEUS GETS ONE MORE IN:

Q4tQ: Will M’uru go down without a nerf?

Absolutely. Groups are clearing content with 1/5 of the amount of players intended — and on Day 1. Pre-nerf M’uru would/will be hard as h*ck for most guilds, but the hardcore players? They’ll breeze through it.

I kind of hope I’m wrong though, because I’m genuinely curious when WoW Classic’s difficulty will “catch up” to the modern game’s. At which point will it start taking guilds just as long to clear content as it did the first time around? My guess is it won’t be TBC Classic.

That’s all for today! Please leave lots of question for tomorrow’s writer, and have a great rest of your week!