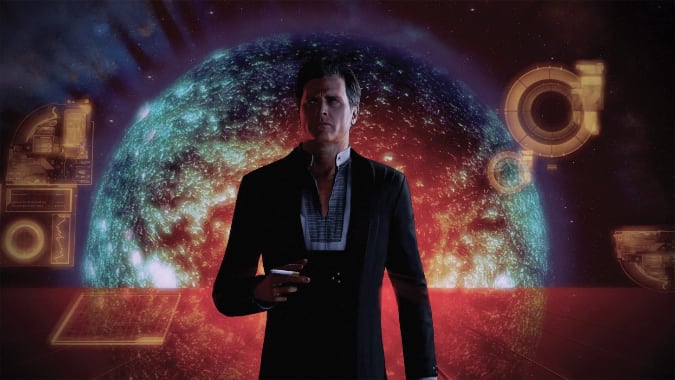 A lot of us at Blizzard Watch are ready to take a break from raid night to dive into Mass Effect Legendary Edition. (If any of my raid team is reading this, of course I’ll be there on raid night. Unless I happen to be sick. You never know.) And if you’re going to be playing, too, why not play with us?

We’re running a group playthrough of the Mass Effect trilogy on our Discord. Think of it like a book club for video games: we’ll all be playing together, chatting about story, and sharing gameplay advice as we go. But it’s a pretty flexible take on the “book club” idea. There won’t be set meeting times: instead we’ll have specific story checkpoints every week, and a spoiler moratorium on any content beyond our current checkpoint. On Thursdays and Sundays, we’ll get a new checkpoint and I’ll post some discussion topics in Discord so we can all talk about the story so far.

I’ll be targeting a playtime of 10 – 15 hours per week, which is probably fast for some of you and slow for others. But the format is flexible: you can log on whenever you have time and join the conversation or ask for help. If you play faster than the group, no problem — just go past our current spoiler moratorium. And if you play slower than the group, well, you may see some spoilers, but you can still hang out in chat to get gameplay help and talk about what you’ve played.

We’re nearly finished with Mass Effect 2, and whether you’ve been playing or you’ve already played, you’re welcome to join us and chat. And I suspect most gamers will have an easy time catching up if you want to join us — or you can pick up when we start Mass Effect 3 next week.

Here’s our ME2 gameplay schedule:

Note that many of these quests can be done in different orders, and some can be skipped entirely — so feel free to can mix and max this schedule to your heart’s content. (And if you want advice on what you really should do and what you can skip, ask in Discord.) However, after each checkpoint we will be discussing spoilers for those quests.

Worried that you may not have enough time to play? Mass Effect 2 is neatly portioned out into half hour segments. Most missions take about 30 minutes, though main story missions may take up to an hour. But even though I’m listing a lot of quests above, it won’t take as much time as it seems.

How to join our Mass Effect playalong

Our playalong will primarily take place in the Blizzard Watch Discord — just click here to join. You’ll want to go to the read me channel and pick up the watcher and letsplayer roles. Then head to the lets-play channel and chat away! You’ll be able to find all of our playthrough information in the channel pins.

From here, you can chat away! Just remember to abide by the current spoiler rules.

Whether you’ve never played or you’re just a bit rusty, here’s a bit of advice.

Remember your actions have consequences. Some of the things you do now will follow you all the way to Mass Effect 3. I can’t say they’ll all be important in the future, but certain story elements will pop up again later.

Which class should I play? Matt says Solider, I say Vanguard — but really it doesn’t matter that much. Pick whatever sounds fun. If it’s not as great as you’d hoped, you can always change it next game.

Do I have to scan all of these planets? At least some of them, yes. You’ll need plenty of resources to upgrade your gear, your companions, and the Normandy itself. While you don’t have to do all of them, there are many useful upgrades — and most of them are expensive. My advice is to scan a planet whenever you pass by so you gather resources as you go rather than running out of resources and having to go planet hopping. If the planet is rated less than “good,” don’t bother — move on to the next.