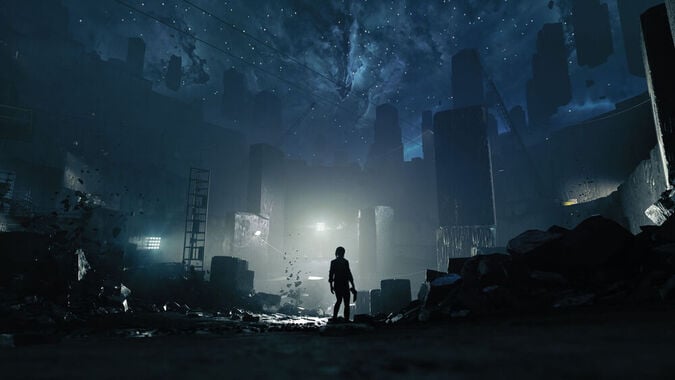 Have you ever felt like a game was written directly for you? Because that’s what Control felt like to me. It checked so many of my boxes that I was hooked from the first minute.

You play as a woman named Jesse Faden, led by the entity in her head to the mysterious Federal Bureau of Control — the government agency in charge of keeping the Weird™ stuff under wraps. From there you explore a sprawling interdimensional office building full of secrets and artifacts with wild powers. What powers you ask? I dunno how ’bout the power of flight? That do anything for ya? That’s levitation, holmes.

I’ve heard it described best as what would happen if the Ghostbusters were in charge of the FBI. Which pretty much nails it. You can even get it for free this week on the Epic Game Store if you wanted to check it out. I wholeheartedly recommend it!

While I take a break from ripping fire extinguishers off of the wall with my mind and launching them at transdimensional entities possessing office workers, it’s time for — The Queue.

HIGH ABOVE THE MUCKY-MUCK, CASTLE MADE OF CLOUDS, THERE SITS TIGER HAWKE, SITTING OH SO PROUDLY

When SL patch 9.1 releases, how long would it take to go from Renown level 0 to level 59 and also complete a Covenant campaign in order to unlock SL flight with a base line level 60 character? I reached level 60 with one character a few days after the expansion launched and haven’t played since that time.

So good news, you won’t need Renown 59 to get flying — that was some early data mining that wasn’t accurate. Shadowlands flying will be coming in the second week of the Korthia quests at Renown 44. They’ve also said that the Renown catch up to 40 will be more robust in patch 9.1 — so it should be pretty quick. We don’t know how they’re going to be changing the catch-up for that, but it’s already fairly quick to get Renown levels. Run some dungeons and do your campaign quests and you’d be surprised how quickly that number goes up.

ELAINE DE SHALOTT, WHAT IS THE SECRET OF YOUR POWER?

OK a real QftQ:
I’ve been playing Final Fantasy 14 and really enjoying it. One thing I’ve noticed is that random groups are much more accommodating to players learning their roles, for example a wipe doesn’t lead to recriminations, an apology for contributing to the wipe is invariably met with a not your fault and an idea on what to try the next time. Some of this is a matter of culture, but I believe Square Enix has nurtured that culture through a number of incentives. For example if it is anyone in the group’s first time doing that instance everyone gets bonus rewards.
If Blizzard were to try to foster a more welcoming attitude for new players or players new to their roles to address the perennial shortage of healers and tanks do you think that would be effective in WoW or is the “get good” mentality too entrenched? How would you structure it

I think that having a carrot to reward good behavior is probably a bigger motivator than any kind of stick to punish bad behavior in video games. Of course you still need tools to address bad behavior, that’s just going to happen anyways, but the carrot is more effective in the long run I think of changing the player bases bad habits.

So why not add some kind of commendation system to dungeons and other random group conduct. If at the end of your dungeon you liked something one of your group mates did, have some way of giving them a shout-out and some extra currency, or a special currency that can be spent on fancy things that say “hey I’m a cool and chill person, let’s be friends.”

Is the Warcraft player base set in their ways? Maybe. It wouldn’t happen overnight, but I do think that with some better tools to build other players up we could see a less toxic environment.

MUSEDMOOSE, WON’T YOU TAKE ME FAR AWAY FROM THE MUCKY-MUCK MAN?

Q4tQ: how in-depth do you think video game tutorials need to be? Asking because I’ve been working my way through my backlog and it’s staggering how many games have complex systems with a squintillion variables and more stats than a sportsball game but just throw you in with zero explanation of how anything works. >_< Nothing like spending more time installing a game than I spend playing it because I’m lost from the very start.

Tutorials are hard, man. They’re things that as players so many people will look at, scoff, and say something like “I don’t need you holding my hand, I’m a badass gamer and I don’t have time for all this nonsense.” I know I’m guilty of saying something like that before.

There’s a certain amount of assumption on the part of a lot of games these days that I’ve found. They know that you’ll have a basic grasp of movement and interaction usually, but sometimes they’ll still walk you through a look around with X move with Y. But when you start talking about things like squintillions of variables you’re getting into the things that aren’t going to be communicated easily in any one tutorial.  It could be that they just want you to poke around on your own and figure out how everything meshes together.

A SECRET TO BE TOLD, A LUOTIANX TO BE BOLD, AND BLASTING FORTH WITH THREE-PART HARMONY, YEOW!

Finished my covenant campaign last night, now I’ve got to grind out the last 17 levels (*cries*). Does anyone know if in 9.1 Kael’thas gets his revenge? I’d hate for him to miss out, honestly, and I’m usually not big on revenge stories.

Well, this isn’t a huge spoiler, but the target of Kael’thas’ revenge is one of the bosses in the next raid. So as players we’ll be taking that character out of the picture. I’m not sure if Kael will have any presence in the raid, but I’m sure that he’ll be happy to know that we’ve put the nail in that coffin finally.

QftQ: What is your favorite movie or novel that is putatively a parody of something but at some point suddenly veers into a very earnest homage? For example, Mystery Men, Galaxy Quest — thoughts?

It’s hard to do better than Galaxy Quest. It’s got everything, Alan Rickman, Sigourney Weaver, Sam Rockwell, a room full of crushing pistons, time travel, jokes about comic cons, and an alien pig monster being turned inside out. I’d also say that Hot Fuzz by Edgar Wright is also an amazing parody of buddy cop action movies (and a whole slew of other action genres) that is itself just a top-notch buddy cop movie. Same with Shaun of the Dead and The Worlds End, only for zombie movies and alien invasion movies respectively. I love Edgar Wright’s directing and I cannot wait to see his next movie Last Night in Soho. That we didn’t get to see his Ant-Man movie is a tragedy.

On the TV side of things, The Venture Bros was a fantastic send-up of the boy adventurer cartoons, and I’m glad that they’re getting to make a movie. I look forward to seeing that sometime in 2032 when it’s finally done.

THEY FORMED A FUZZYBUNNY THE LIKES OF WHICH HAD NEVER BEEN SEEN!

Q4tQ: Do you think when we’re done with Shadowlands canonically we’ll leave, seal it off, and never go back??

We’d have to right? Leaving a two-way portal to the afterlife just sitting around feels like it’s just asking for trouble. Between people trying to go in and rescue their loved ones, or souls trying to escape on their own, I feel like that’s a whole can of worms that the world (of Warcraft) just doesn’t need.

Q4tQ: What are your top 5 most played games? To keep this interesting, exclude subscription games like WoW, or anything you haven’t played in a wicked long time.

I don’t have an easy list because I have so many different places where I’ve played games, but I’ll give it a try. Here’s my top five without Warcraft.

Honorable mentions go to XCOM, Hades, Control, Horizon Zero Dawn, StarCraft, and Halo. All of which I’ve racked up impressive numbers. Just not as many combined as those top five.

As for Warcraft — I know it’s at the top, but I swore that I would never do a /played again after the last time I did that. Since that was back in Mists of Pandaria, the number is probably only more dismaying.

Stay cool out there folks! Leave Anna lots of questions for tomorrow and tell your pets that I said — “who’s a good boy/girl, is it you? Yes, yes it is.”