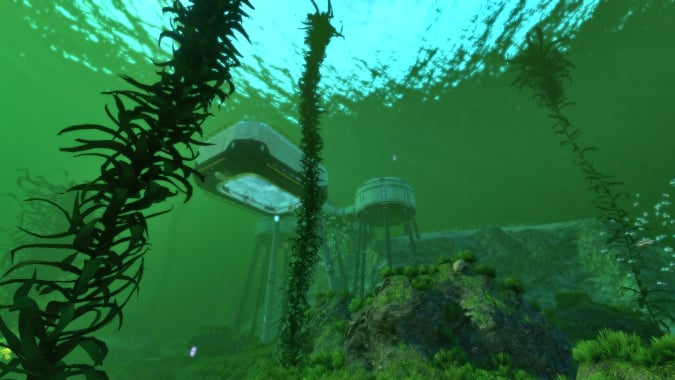 Ah, to be a former Alterra employee building my own spacious underwater seabase piece by painstaking piece.

This is The Queue, where you ask us questions and we can totally answer while we go find more titanium and watch the Nintendo panel. Multitasking is a thing, it’s fine.

Q4tQ: how would the main character of the last game you played fare if they were suddenly dropped into Azeroth?

I’ll admit it loses a little bit of its charm when you already know where certain things are and don’t need to explore blindly to find it. The building and accumulation is fun, but it’s a little less fun for me when I know that I just go to a particular biome to get a new base part or resource, and I don’t need to listen to the radio to blindly find my way to the next point of interest. Fortunately, it’s still constantly lowkey terrifying, especially when I get all turned around and wind up on the other side of the planet on the edge of an endgame biome, purely on accident.

I feel like, as long as he doesn’t actually engage with a boss or whatever, Ryley would be pretty okay in WoW. He has a lot of reasoning skills and resourcefulness, but since his fabricator explicitly doesn’t include weaponry more advanced than a knife for survival, if he accidentally aggroed something big, his only recourse would be to run away. He would’ve been amazing in the Warlords xpack. Between building the Garrison and accumulating all those random resources, he’d thrive with those crafting buildings and varied recipe pieces.

However, unfortunately, it would also balloon the size of his debt to Alterra by yet another order of magnitude.

Q4tQ: Why do we fight?
(and no Chen Stormstout quotes, now!)

Q4tQ: How long should a boss fight last, and is there an upper limit? I just wrapped up a 2 hour boss fight, and that felt like it was right on the border line between fun and exhausting.

For me, it depends on whether or not it’s a solo game, and whether I can pause, or even save, and come back.

I will say I tend to enjoy it when the pacing of a boss fight is reflected by the player a bit. My playstyle tends to favor control. I like poisons and kiting, less so going toe to toe and making sure combos land. I tend to like longer boss fights as a result, because they lend themselves to that playstyle — boss fights designed around the latter playstyle tend to be heavy on dodging telegraphed moves and then stabbing a whole lot, then backing off until the next telegraphed move, which lends itself to quicker combat.

That said, if a particular battle is longer than a half hour or so, it needs to have some kind of pause function, because I’m definitely going to have to deal with something partway through. I generally try to limit my gameplay to when my kids are asleep, but even then… they wake up unpredictably sometimes, and if they’re gonna, it’s going to be when I’m in the middle of a complicated boss fight.

Q4tQ When you go back to work after a break and start going through your emails, do you look at all the new ones first before starting tasks, or do you work on tasks as you go through them?

BlizzardWatch’s overall structure is a little different, so really the first thing I do is check in on the Discord to see if there’s anything pressing before I go into my email. Also, social media tends to have most of the breaking info, so I don’t necessarily need to check my email so much as my Twitter.

By the time I actually getting around to checking my email, I’ve already seen most of the content in there. PR emails from game studios or esports orgs tend to be addressed from either source. Most people I know personally just contact me on another platform, though sometimes there is an email request from an actual person not inquiring about a completely unrelated topic — it’s bizarre how writing about “pets” gets you a whole lot of offers to mail you dog food.

And this is how I have over 2,000 unread emails in my inbox. Yes, seriously. Don’t tell Liz, she’ll probably hyperventilate.