Sinrunner Blanchy learns how to fly in patch 9.1 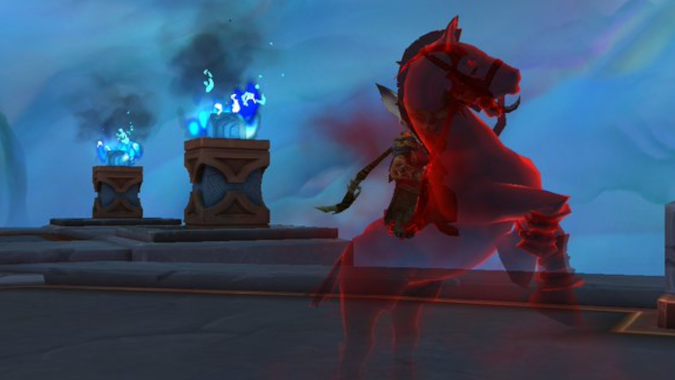 Sometimes you have to take your good news when you can find it. In patch 9.1, a lot of bad stuff is happening — Anduin is now a puppet enslaved by the Jailer, Sylvanas is helping Zovaal on his unspecified evil plans, and we’re leading the Covenants into the Maw itself to wage war on the Jailer’s forces over the secrets of lost Korthia, now absorbed into that menacing figure’s dominion. There are probably Nathrezim involved in all this and we may finally learn how Sire Denathrius relates to those archetypical forces of malevolence. So yeah, there’s a lot of potential bad news for us Azerothians, but at least we now know that there’s one piece of good news, and that’s this — our old friend Blanchy, once a mortal horse and now the magnificent Sinrunner, has learned how to fly.

Yes, in patch 9.1, Blizzard has realized that the ghost of such a good horse should be able to fly. I mean, if the Headless Horseman’s much less good horse can do it, I think it’s only right that one as noble and self sacrificing (and, frankly, undeservingly murdered by the Defias in Westfall) as Blanchy should gain the power of flight. And so, for all of you who went through the process of acquiring the Sinrunner, you can at last march your very good blood red spectral steed through the air — or at least you will be able to do so once patch 9.1 is live, anyway. This also means you’ll be able to ride the Sinrunner across the skies of the Shadowlands as soon as you unlock flying there, which is also coming in patch 9.1.

So sure, the Jailer has at least one and more likely two of the keys he needs to do whatever evil thing he’s trying to do, and we’ve lost one of Azeroth’s heroic leaders to his terrifying power, and Sylvanas seems poised to help destroy all life as we know it, but at least there’s a flying ghost horse. Take the good with the bad, folks.

Blizzard Watch is made possible by people like you.
Please consider supporting our Patreon!
Filed Under: Mounts, Old Blanchy, Patch 9.1, Sinrunner Blanchy
Advertisement