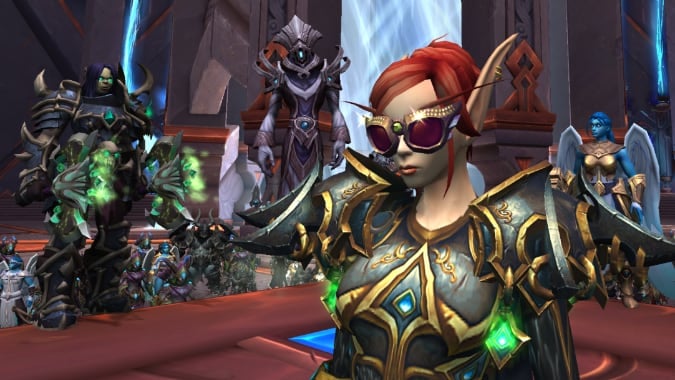 Happy Friday, Queue! I hope you’re enjoying patch 9.1 in WoW or patch 20.8 in Hearthstone or the latest and greatest iteration of whatever your favorite game of the moment is. For my part, I’m back in on WoW to get through the latest content (and prep for raid day next week).

So, let’s talk about WoW!

It’s going to take an extra week to get flying as I only had one renown quest to make it to 41.

It makes sense from a story standpoint. Covenants have brought the fight to the Maw, and to earn Renown we have to go out and help them instead of just fetching 20 souls and calling it a day. Mechanically, though, this is rather more demanding than collecting souls for the week, something that might have taken 20 or 30 minutes, max. Doing the Korthia weekly takes a long time. You’ll do one or two Assaults for the week and a couple of days of dailies, and maybe spend some time hunting for rares and treasures. That’s several hours of work, at least — closer to the amount of time it takes to get 1k Anima.

On the plus side… maybe… Renown catchup mechanisms remain super easy. If you miss out on one Renown you’ll be able to pick it up from almost any game activity in the following week. That will leave you a week behind, but being a week behind isn’t so bad. It’s completely, easily recoverable.

Ai’ght, weekly is 25% done. That’s good. That means I can do another 25% worth every night between now and Tuesday and have time to get it done.

Assaults happen twice a week and give 25% quest progress each. So if you hop on twice a week and zoom through the Assaults, you may only need a couple of days of dailies to wrap up. I think getting half of your weekly progress from Assaults will definitely be the best way to save time.

Question for the Queue
With the ability to add a optional item to change a crafted items ilvl, do you think we might ever get that mechanic used for dye? Dyeing gear would be neat but dyeing bags would be the best. I like having each of my bags different so I can at a glance open my ‘random useful item bag’ when I need say my cloak to hearth to SW or neck to port to black temple.

This seems reasonable — a dye item of some sort useable by anyone with a crafting style interface. (I suppose you could lock it behind a crafting profession, but that would complicate it and add a lot of expenses.) Personally, though, I think it would be more straightforward to just add it into the transmog interface somewhere. Diablo does it like this and it makes a lot of sense. Just have all of your gear customization in one place.

But I’m not hopeful that Blizzard will add armor dyes in any format. There would be a not insignificant amount of dev time to catalog every piece of gear in the game and decide which parts would take dyes, which colors would change when, all of the details you’d need to consider to make gear look good in every color. The system wasn’t designed for this, and so I suspect it would be an effort to retrofit it. (This is all speculation, but I’d say it’s speculation grounded in some reasonable assumptions.)

And there are lots of things demanding dev time. I don’t feel like this one’s going to be at the top of the list. Which is a shame, because a substantial portion of my gameplay time is dedicated to looking good. WoW is basically a very elaborate, very complicated game of dress up.

Bar a few irritations I’m really liking 9.1! The story is a bit hit or miss for me but it’s nice to have a firm goal again with questing and the like. :D

No kidding. My gameplay time dropped substantially after I maxed out Renown. The weekly quests that I’d done religiously up to that point so I could advance the story no longer seemed that important, and the Anima grind felt insurmountable — it never felt like I made any progress.

So I’m glad to have something to log on for again, ways to advance. There’s new story to explore, gear upgrades to find, and I’ve had a surprising amount of fun just wandering around Korthia and rummaging through birds’ nests.

Sure, the Anima grind is still pretty insurmountable, but I have things to occupy my attention in the meanwhile. And maybe the Anima will just… show up. It could happen, right?

Q4tQ: what’s your favorite animal that’s somehow missing from WoW’s mount selection? Real or fictional, what would you absolutely love to ride around on?

For me, it’s a capybara. Show me a game where I can ride around on an enormous capybara and I’ll play it for years, perhaps forever.

I read the first line of your question and immediately thought, “Definitely a capybara.” And then I read the rest and you’re already well ahead of me on this thought.

Of course, the problem with a capybara mount would be that capybaras are so chill that I can’t seem them being in a rush to get anywhere. They’d be more of a walking speed mount, and instead of going straight they’d amble around and occasionally stop for naps or to float peacefully in any pool of water you pass. Maybe that’s why we don’t have a capybara mount already.

Sure, we’re playing in a game of fantasy where we wear magic armor, hurl fireballs, and fight dragons, but a capybara running on command would be the real immersion breaker.

My second thought would be a hippo, but there has been a hippo mount — I just wasn’t sufficiently enthused of PVP to get it myself.

And that’s all for our first week of patch 9.1. I hope you have a good weekend — holiday weekend for those of us in the US — filled with good friends and good games. And give your pets some extra scritches for me, because July 4th can be a stressful holiday for our furry friends, and they may need them. Stay safe out there, folks!