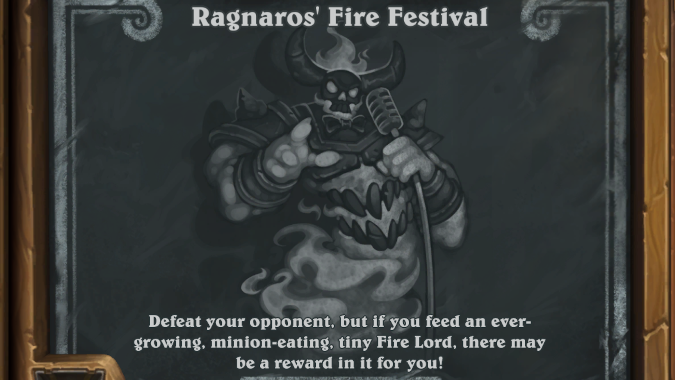 Ooh, there’s gonna be fireworks  (Fireworks!) for the Fire Festival. Red, white, and blue fireworks, like diamonds in the sky. We’re gonna shoot the entire works on fireworks that really show, oh yeah.

With apologies to Schoolhouse Rock, we’re celebrating the Fire Festival in Hearthstone this week with Ragnaros’ Fire Festival Tavern Brawl. As you buff the Brawl’s Mini-Rag, you’ll see some amazing pyrotechnics. Ooo. Aaaah. Wow. Nothing says Fire Festival like actual lord of the Firelands himself after he got caught playing with a Gnomish World Enlarger.

Let’s take a look at this holiday Brawl and how to score your weekly win.

This Brawl is all about Mini-Rag. He’s a 2/3 with Immune, and at the end of each turn, he fires 1 missile for every attack he has. It will hit any random enemy character (minion or Hero). If Mini-Rag kills a minion his attack (and the number of missiles he fires) increases by one. Each turn he switches sides.

While you still get your card pack after your first victory, the reward mentioned in the description refers to three levels of fireworks. These are triggered by using your Wow! emote after you build up Mini-Rag’s attack. Level 1 fireworks unlock at when Mini-Rag’s attack is 8. Level 2 unlocks at 30 attack, and level 3 at 60, though at that point, I’m not sure how your opponent will live past that turn.

Fortunately for players trying to unlock these high level fireworks, you don’t have to get Mini-Rag to 60 within one game — your efforts will add up over all of your Brawls this week. As long as you keep playing, you’ll eventually unlock the fireworks.

This is a Constructed Brawl using the Wild rules. All cards are available and the overall size of your collection will make a huge difference in the decks you can play. I’ll give some suggestions below, but if you have a smaller collection or you’re a newer player, you’ll need to make multiple substitutions to most of them. 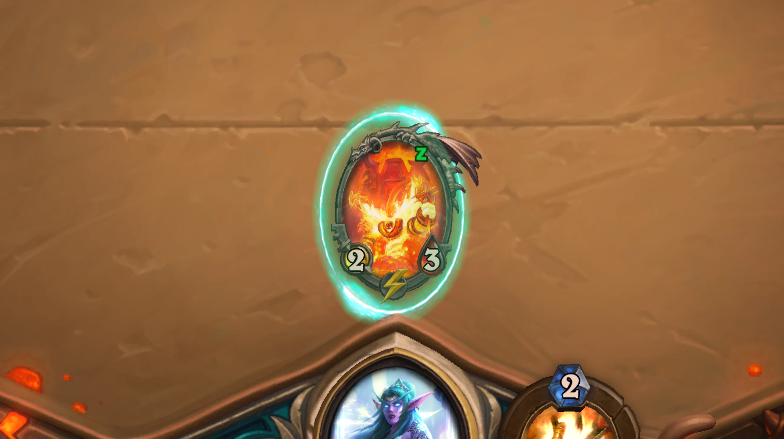 There are two main approaches. You can feed Mini-Rag or you can starve him. Feeding Rag strategies leave lots of low health minions on their side of the board. When Rag attacks, he will kill them and grow his attack. You keep your opponent’s side of the board as clean as possible and let Rag do the work of killing them. Starving Rag strategies revolve around high health minions and healing. You try to stop Rag from growing and outlast your opponent. The feeding Rag strategies have been more popular in the games I’ve done and fit with the faster pace Hearthstone has been moving towards since Ashes of Outland.

The most important thing you’ll need to win this Brawl is a good deck. In constructed Brawls, players discover the most powerful lists very quickly, which leads to the Brawl falling into a meta structure like we see on the ladder. This is a repeated Brawl and it’s Wild format, so players will be pulling out some of the decks they used last time. Let’s take a look at a couple of options, including a budget pick for players with smaller collections.

This deck abuses the mechanic that Mini-Rag’s missiles are effected by Spell Damage. You build up huge Spell Damage on Mozaki and let Mini-Rag decimate your opponent.

YouTuber kiwiinbacon’s Paladin feeds Mini-Rag a constant diet of Silver Hand Recruits. Not only will Mini-Rag’s attack grow to an impressive size, but you’ll unlock the higher level fireworks. Like most feed Rag strategies, a high attack Mini-Rag is your win condition.

This deck aims to starve Mini-Rag by keeping high health minions alive with buffs and healing. It uses the venerable Divine Spirit plus Topsy Turvey combo for the win.

This is one of of the cheaper options. Mini-Rag’s missiles activate all your Enrage and Frenzy cards allow you to deal more damage to your opponent or his minions.

Hopefully, one of these decks listed here should get you the W. If you’re on a budget, I’d recommend the Warrior deck. Keep checking Hearthstone Top Decks, because there are more Tavern Brawl decks being added by the hour. If you find another great list, share it with us in the comments.