The Queue: I’m kind of a fun guy 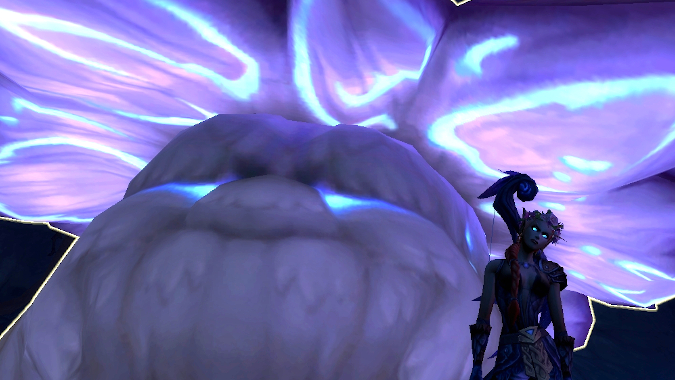 One of the best parts of adventuring to new places is meeting iconic new characters and palling around with them. This guy just told me I’m his favorite mushroom tender, so I’m kind of a big deal.

This is The Queue, where you have questions and we’ll give you the answers via mycelium network.

Q4tQ: does anyone feel satisfied with the “race fantasy” of WoW? The representation of their race in story? That a given race plays distinctly from other races?

For my own part, races just feel like player skins you have to level up. A tauren plays just like a gnome, and to me that sells what I stated in the previous sentence. A Tauren is massive, and stronk. They should have extended melee reach. They should suffer half the normal knock back distance, and inflict double the normal knockback distance. Being so big and bulky reduces your base dodge chance to 1%, but you can easily turn aside enemy blows so parry and block chances are increased.

This would be a cool perk for a single-player RPG, but a huge pain to balance in an MMO. I’m not sure how it shook out in Classic, but back in the day a whole lot of people rerolled their Priests from scratch for one lousy spell which in theory was just a little bit of flavor, but in practice allowed Dwarven Priests to circumvent a mechanic which was kind of fiddly to deal with. We’ve seen those watered-down racial perks get nerfed and defanged over time because they were too good — even if that relative quality was mostly stemming from unscientific social pressure. There’s just no way to balance around even bigger player power swings for the sake of racial identity.

That said I would love it if, every so often, there were a racially-centric quest, even if it’s just a handful of RP lines to chat up Liadrin or whatever to tell her what we’ve been up to in our travels. The players’ movements as a character have been so crucial to the events that have unfolded that it just makes sense to keep our leader informed, even if just in a conversational way. My specific Blood Elf loves animals and archery — doesn’t really care all that much about magic or the court — but would nevertheless be able to give Lor’themar a report about the strange nature of the power of Anima. I’d guess a Dwarf would have something to say about the landmasses themselves, and the Undead would certainly have an interesting chat about, you know, just… the whole thing. It’s probably a bit of an existential crisis for them, definitely worth a chat, even just a friendly one, with Calia and Lilian Voss.

A Human, of course, would probably go to Tess Graymane (?) to tell her how few pumpkins there are in the Shadowlands, because that’s the defining characteristic of Humans in WoW, as far as I can tell.

Q4tQ If somehow Arthas returns as a raid boss, do you think he should drop a high res/Shadowlands version of Invincible?

How do you make something more high-res if you can’t see it?

Q4tQ Does the frequency of horses in the Shadowlands indicate something special about the species that sets them apart from all other non-humanoids?

I feel like it’s less about an inherent horsey quality, and more about how often we use them. After Kul Tiras, between how many horse mounts there were, and often I tended to accidentally jump off cliffs, I’m surprised the Shadowlands aren’t more packed with ponies.

I’m also surprised that Ol’ Blanchy is the only one who has their mind set on revenge, frankly.

Q4TQ: As the resident esports queen, how does WoW Race for World First stack up to other esports events? Also who are you rooting for if anyone?

It’s a weird one, for a number of reasons. As a mainly home viewer, the overall experience of sitting to watch doesn’t change too much. Sitting at home watching Race for World First doesn’t differ too much from watching an Overwatch League game, even if going to see the two in person is completely incomparable… especially since you really can’t go see RWF, even without COVID.

RWF a very unique event, because (in theory) literally any raid group across the world could (theoretically) be in contention (sort of). Obviously, the amount of work behind the scenes makes it so there’s just a handful of contenders, plus maybe a rogue group of scrappy kids claiming top 3 from one of the earlier bosses. This also means that actually finding a team live and in contention at any given time can be really difficult, and that even having a live in-person tournament event is an utter impossibility. Live in-person events are amazing in terms of crowd energy and the je ne sais quoi of enjoying something together en masse, but having never attended one I can’t really relate.

Complexity-Limit (which is the raid group I’m rooting for) was genius this go around, having actual formatted “shows” to bookend the viewing experience, as opposed to just streaming from whenever to whenever. We do have a guide for viewing the World First Race on the site, which I’ve also found invaluable as a viewer, because Liz made Cory do most of the dirty work of tracking down the teams most likely to be in contention. We’ll also update you as the bosses fall.