The Blizzard Watch D&D crew fights a zombie T-Rex, defies a goddess, and steals back a magical chalice in our most recent escapade 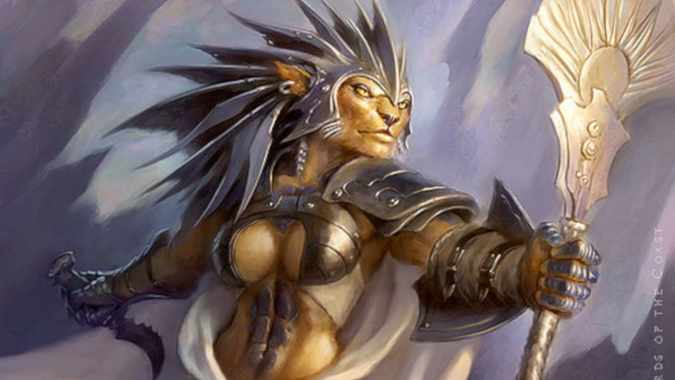 So this past Satruday, the Blizzard Watch folks played Dungeons and Dragons again, something we all enjoy doing from time to time. It was the sixth episode of our Otherweald campaign, where Joltin’ Joe Perez runs our intrepid band of adventurers through mystery and mayhem. You can listen to it below and read further for a refresher on who’s who or enjoy a written recap of the play session.

Before we get started on this episode’s recap, let’s run through the players:

Okay, now that that’s out of the way, let’s talk about what happened.

The party found themselves confronted with a gigantic undead T-Rex, which quickly moved to the attack. The goddess Lilith, seemingly seeking to test Rahn’s worth and amuse herself, observed as the party made ready to attack. Yordle casting Moonbeam, Rahn melting into the shadows to strike without mercy, Diener being all warlocky about everything. Mairsy discovered a strange necklace that allowed Toobee to grow into a massive adult Smilodon while using her somewhat temperamental magic wands to do battle. After a struggle,  and the unpleasantness of the T-Rex barfing up more undead during the fight, which ew, the party triumphed and decided to head up the massive ziggurat to the top where Lilith waited.

The goddess was a… well, you can’t say gracious, but clearly amused at the antics of the brief mortal lives that lined up before her. She held forth the sacred chalice of Hela, befouled with blood, and offered to let the party, especially Rahn who had been a valued servant to the cult of Lilith before her change of heart, join her as her servants. Unsurprisingly nobody was big on drinking anything Lilith offered them, perhaps because they’d just seen an undead dinosaur monstrosity heaving up other undead corpses and it was very gross.

Annoyed but still seeking amusement, Lilith had one final game to play — the animated and amalgamated corpses of Rahn’s former cell, transformed into a behemoth of joined together rotten flesh and mouldering bones. Each member of the party played to their strengths — Mae used her Rune Knight special ability and a Potion of Giant Growth to become a huge creature, towering over even the undead flesh colossus, and kept its attention aimed at her. Rahn set to removing the sacred chalice from the monstrosity’s own chest while also doing a lot of stabbing, while Yordle, Mairsy and Diener harried the horrible undead mishmash with ranged attacks. Finally, Rahn struck the killing blow, regaining the chalice for the Church of Hela and her friend Hadderai.

Now all they have to do is get back with it. Hopefully we’ll find out how that goes in the epic conclusion, as Joe returns in August to run the next exciting Otherweald adventure.