The Queue: It’s good to be The Queen. 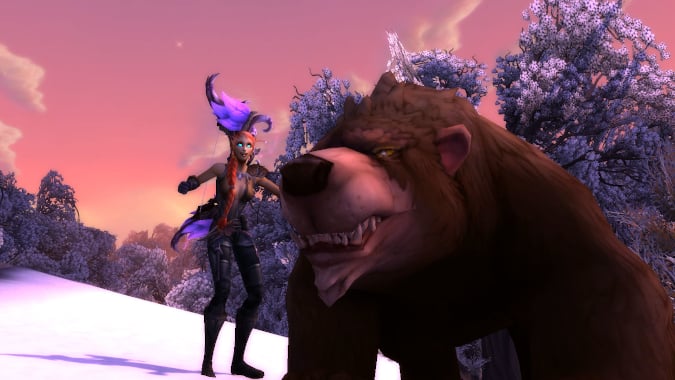 Pfft, no, of course I’m not launching a coup to take over The Queue. That’s too much rhyming.

This is The Queue, where you ask us questions and we may deign to answer, peasants. Bring me the first petitioner.

Q4tQ Would you have an issue with it if Ve’nari becomes a raid boss later?

It’s weird, because I’m fully expecting her to… betray us isn’t quite the right word. We’re in a mutually beneficial relationship with no strings, which is by its nature somewhat tenuous. We stop being useful for her or she finds something better, she’s going to drop us — no questions asked, no explanation needed. We’re basically friends with benefits, but the benefits is a euphemism for Stygia.

But then, that’s been our relationship with expansion-specific characters for a good long while now, from Yrel to Wrathion to the various Hellscreams to Illidan to our entire class Order Halls. We’re Down To Friend til this particular story arc is over, then wham bam thank you Tortollans — til y’all become an Allied Race, maybe.

Ve’nari seems like a narrative mirror to the player character in a lot of ways.

As such, I don’t really fully anticipate her going “haHA, I was the incredibly evil (Azshara or whoever?) all along!” and then we engage in an epic boss fight. I do expect that there will be a reveal with her identity, which was intentionally made somewhat murky, but that could run the gamut all the way from Nameless Flunky We Killed in Razor Hill to Tiffin.

I’ll add too, that given the constraints of telling a story within an MMO like WoW, a heel-turn twist is far less impactful than in nearly any other media. Maybe it’s because I am the media so I’m spoiled pretty much the second the Dungeon Journal goes up on the PTR, but my experience with discovering twists in WoW is pretty much “oh btw (character) is a raid boss now,” which usually takes out the suspense, a bit.

Q4ftQ – Wasn’t Torghast supposed to be something for non-raiders to work on? Now I’ve got to have ilvl gear higher than I can obtain to take on a lvl 10.

You know what they say about assumptions, etc.

When Torghast was announced I was ecstatic, and it was by far the most common feature I interacted with during the beta. Give me the zaniest abilities possible, make me (or Rutherford, really) an unstoppable god or a wet noodle depending, and I’m a happy camper. Roguelites tend to be one of my favorite genres, as long as I’m feeling whatever the central game mechanic beyond the game type, of course. Hades was one of my most played games during the pandemic, which was really saying something since playing a game that action-packed on PC meant my forearms would ache.

The one thing which was undefined for a lot of my time playing it on the beta, however, was the rewards structure. You would run through it and get a chest at the end that had Stuff in it — purples or blues or oranges, basically just with an icon that said something like “Cool Item 0000” (I forget the actual string at this point). So, I assumed it would be a Roguelite where I would be able to gain true, permanent, in-game upgrades from my runs, as opposed to just the intangibles from Roguelikes, where you basically go farther as you understand game mechanics better and Git Gud. Beyond Soul Ash, I was sorely mistaken.

Though I’m disappointed, I completely get it, though. Rewards from Torghast aren’t present in a vacuum — they’d have to fit neatly within the existing ilevel hierarchy from every other activity in the game. Doubling up on Heroic Dungeon-ilevel rewards would be disappointing for nearly everyone, but as you dial it higher, especially with how luck-based your Anima Powers are, you’d make every form of content obsolete.

This is another of those questions where the answer is very, very subjective, but if I were the sole person directing all design decisions and didn’t have to answer to anybody at all, I would love an expansion where we just fix stuff and mull around the various cities — kind of like a political intrigue session of D&D. We could be jockeying for position to become the next cursed Warchief or trying to root out yet another weirdo cultist plot among the Stormwind nobles. Maybe trying to balance some of the farmlands bestowed to you by the crown — really get to the root of why these peasants are growing so many pumpkins. We could visit old friends and help them restore the areas we probably kinda sorta destroyed and just left there, which is a kind of casual irresponsibility which has always bothered me. If nothing else, please let me help these schlubs finish the bridge in Redridge.

And, of course, that would be the expansion that finally gave us player housing. Not only would it just fit in well with that kind of narrative arc, but I mean, I’m the one making all the decisions. That’s an obvious day one directive from me. You’d also have to pet battle in order to be an effective raider — don’t worry about how that would work, just worry about leveling up your pets. Yes, all of them. Obviously.

I guess there’s room for a sudden narrative heel turn in WoW after all.

Long May I Reign.