All of the Questlines Hearthstone’s United in Stormwind expansion 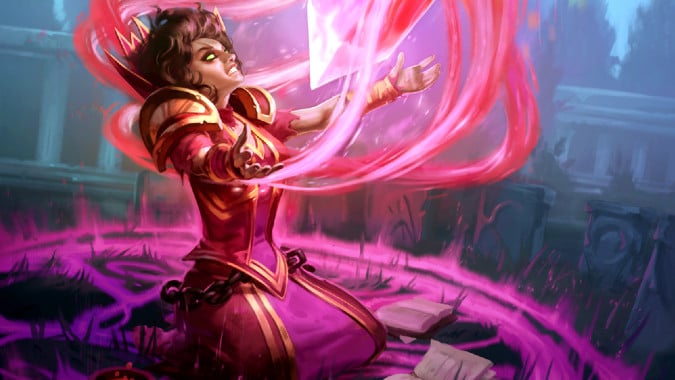 The new Hearthstone expansion United in Stormwind is now live, and Quests are back! Well, sorta. Quests are back, but in a highly modified form: as Questlines, which ahave multiple steps to complete, each with a different requirement with a small, immediate reward. Completing all three steps of the Questline rewards you with one of the ten Mercenaries from the Year of the Gryphon in the form of a powerful minion.

The way that these Questlines diverge from regular Quests is interesting: the delayed payoff is offset by the intermediate rewards in a way that makes players more likely to get something out of their Quest. Even if they don’t get to the final reward, they could conceivably win a game while still getting some value out of their Questline.

Let’s take a look at all of the Questlines in United in Stormwind to break down how they work and how to make the most of them. 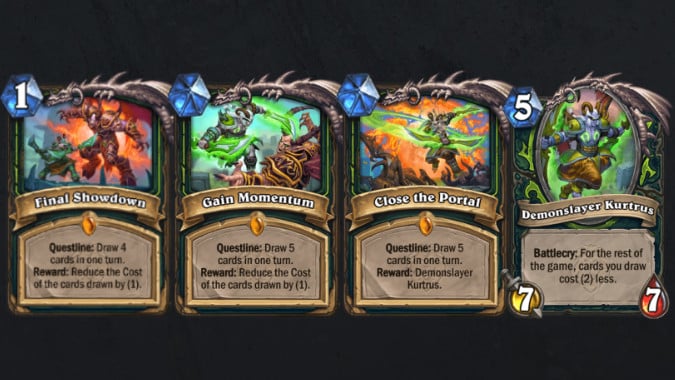 You need to draw a lot of cards on the same turn, for every step of this Questline. Four, then five, and then five again. After drawing all 14 of those cards, your reward is that any further cards you draw cost two less mana (attached to the Battlecry of a 5 mana, 7/7 minion).

Is that a good reward? Yes, yes it is. But given all the cards we’ve seen for Demon Hunter, I’m not convinced that they’ll find it very easy to actually accomplish that goal. Regardless, the first 9 of those cards will also get a mana reduction effect (for 1 mana each). And mana reduction effects are usually very powerful.

I remain unconvinced by this card, but I admit that this one is very hard to properly evaluate. 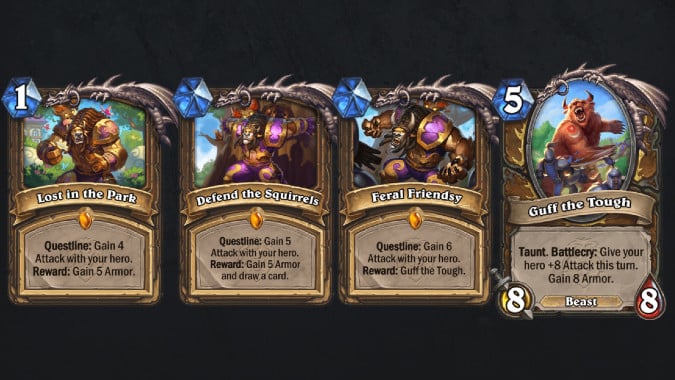 Druid Questline: Lost in the Park

This Druid Questline is interesting because it deviates from the current decks from Druid, which heavily favor big spells, and minions. Instead, it can only be completed if you play cards that increase your hero’s Attack — just using the Hero Power every turn won’t cut it. And those cards don’t exactly have a very favorable track record, never really having found much success in the best Druid decks.

In addition to that, the reward is hardly impressive, when compared to some of the others. Honestly? I’m far from convinced by this one, and I struggle to see a deck that would want to use it at the moment. 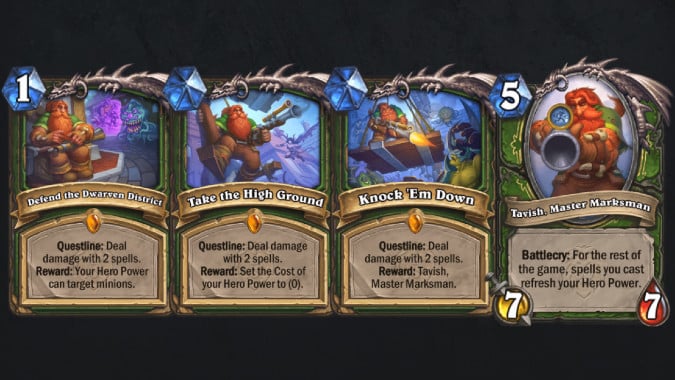 Dear lord, this thing is ridiculous. The requirements for this quest seem exceptionally low when compared to every other Questline — casting damage spells is what Hunter already does, a lot. It adds utility to your Hero Power, then makes it free, and finally makes it able to be refreshed?!

This is possibly the strongest Questline in the game. Time will tell if that prediction will be confirmed, but if I had to put my money in one of them, it would be on this one. 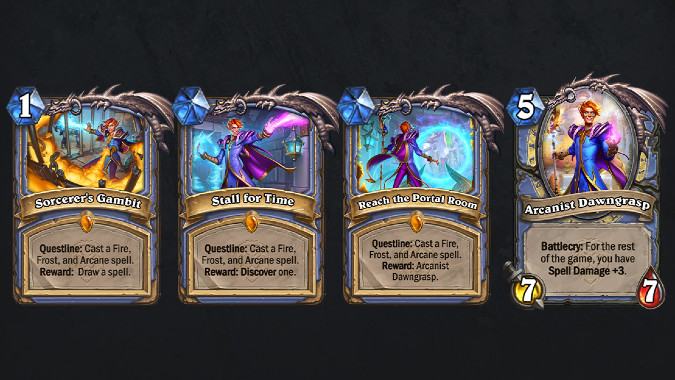 This Questline will ask you to have plenty of spells of all three Mage schools in your deck — Fire, Frost, and Arcane. You’ll also likely want to double-down on effects that generate other spells to be sure you have plenty of the right spell schools when you need them. Thankfully Mage is not wanting for that particular type of card either.

The steps of the Questline help you by rewarding you with card draw and discover. At least on paper, it seems like this Questline will be much easier to complete than the Warlock one.

As for the final reward, Mages get Arcanist Dawngrasp: while this card isn’t quite the same as the old Malygos, with his whooping +5 Spell Damage, +3 Spell Damage is still a very sizeable bonus! As soon as Dawngrasp hits the board, you’ll most likely be looking to close the game with your nuke spells to the opponent’s face — or, at least, on clearing their board and setting up your victory in the next few turns. 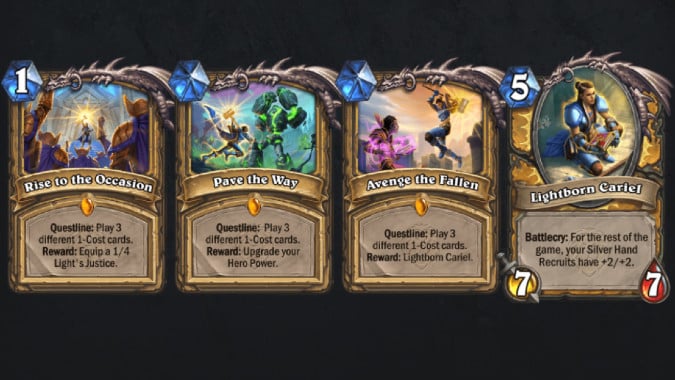 Paladin Questline: Rise to the Occasion

Is this Questline an attempt to revitalize good old “Dude Paladin?” That is — a type of Paladin deck that tries to bolster the power of their ever loyal 1/1 Silver Hand Recruits, and that has seen success in the past.

Looks like Paladin will be attempting to become more aggressive in general, playing a larger number of 1-Cost cards, and attempting to take the board early on, and never let go of it. That type of strategy can only flourish on faster metas — if there are a lot of strong Control decks out there, it’s hard for those minions to stick around, since everyone is playing so much removal. So, more than any other Questline, I feel like this one will be very dependent on what the meta looks like. 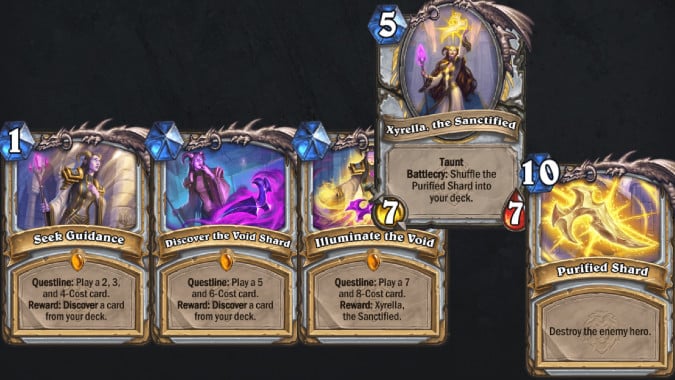 Did you ever imagine that one day you’d see a 10-mana cost spell in Hearthstone that literally wins the game when cast? Well, those days are about to come, for that’s exactly what the final reward for this Questline is, believe it or not!

Still, using the Shard might not even be necessary. Control Priest often wins the game by attrition, and Purified Shard is simply a “win-condition” — but the way that the deck plays should be very familiar, and possibly effective. 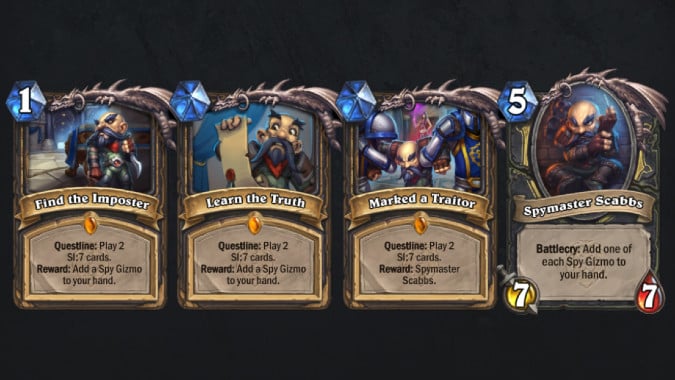 You might be reading those Reward descriptions and wondering just “what in VanCleef’s red mask is a Spy Gizmo?” Well, they are 1-mana cost cards with assorted effects, as seen below: 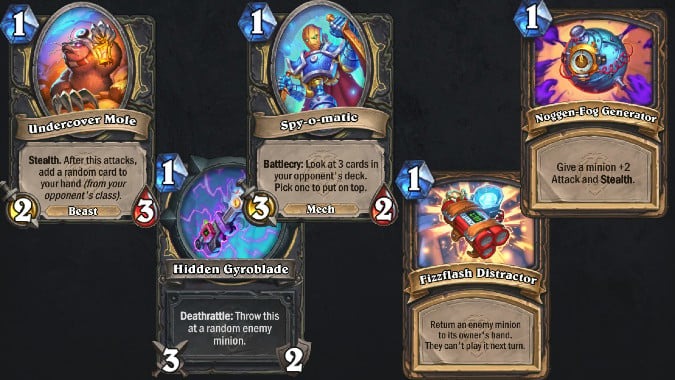 By itself, this Questline doesn’t allow you to win the game. Rather, it serves to boost your battle plan. You’ll keep doing Rogue things: drawing lots of cards, bouncing minions, attacking with weapons, messing with your opponent. And as you complete the steps of this Questline, you’ll get more and more tools to keep doing just that. 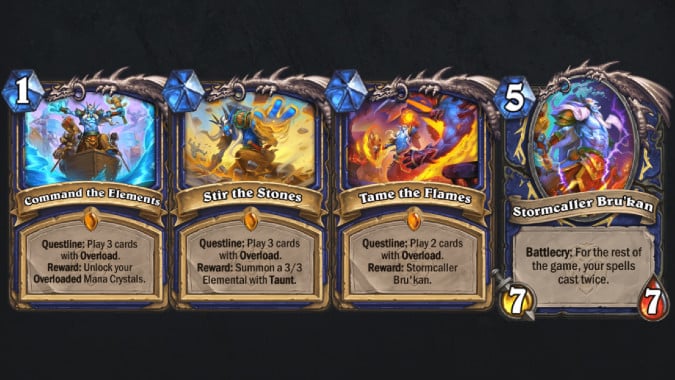 Shaman is a very strong class in Hearthstone right now, and it looks like things will stay that way once United in Stormwind releases. The class is getting some very strong new spells, such as the incredible Overdraft.

This Questline seems to shift the focus from the current Elemental minions to one that is more focused on casting damage Spells with Overload. The final reward, which makes your spells cast twice, will make it easy to finish games. This is one of the strongest Questlines, in my opinion. 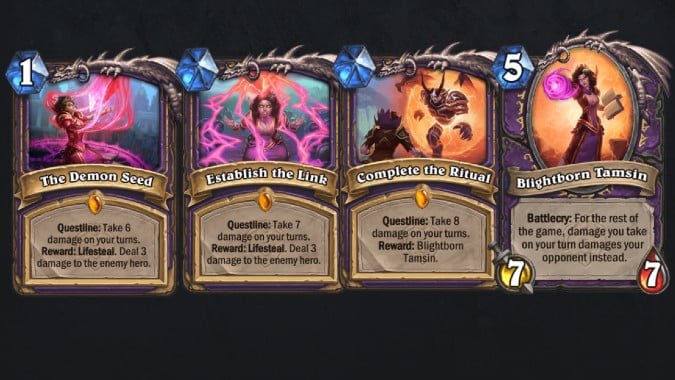 This questline requires you to take a lot of damage on your own turns. 21 in total, which means using your Hero Power eleven times, at minimum — something unlikely to be accomplished in many games by itself. That means that you will, with all certainty, want to also include other sources of “self-damage” to your deck in order to speed up the process of fulfilling these steps.

The 21 damage you need to take in order to get Blightborn Tamsin is offset by the first two rewards: they both deal 3 damage to the enemy hero, with Lifesteal, so you’ll recover six out of that 21 damage automatically. Still, that’s 15 damage that you’ll be dealing to yourself, which means that you will also want to include plenty of self-healing, possibly from other Lifesteal effects (which Warlock has plenty of, so it’s not a big concern).

The final reward, Blightborn Tamsin, is an extremely powerful card — assuming that you still have lots of self-damage effects left to use to trigger her power. 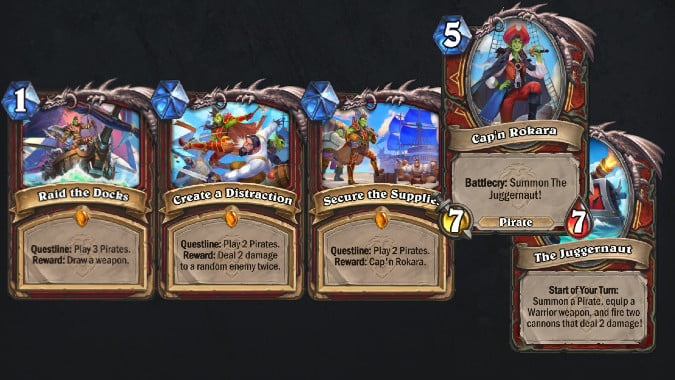 Pirate Warrior is back! With a vengeance. This Questline rewards your Pirate gameplay from start to finish, by giving you all the tools you need — drawing weapons, dealing damage — while only asking you to do what you were already gonna do anyway, which is to play Pirates.

Much like the Hunter Questline, this one seems like it will be naturally very easy to complete. And also like that one, the final reward is very powerful. Looks like the Rush days might be over for Warrior, because Pirates are here to stay!

These powerful cards should have interesting gameplay effects — but as we can see, there’s likely to be a power discrepancy between Questline cards. United in Stormwind releases on August 3.

Blizzard Watch is made possible by people like you.
Please consider supporting our Patreon!
Filed Under: Questline, United In Stormwind
Advertisement