The Queue: The Banshee Queen 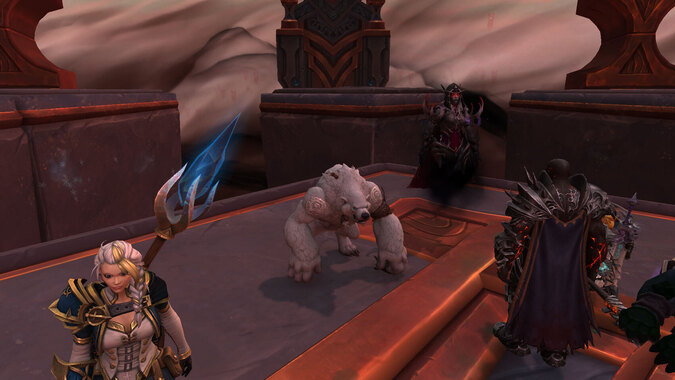 Ahead of the Curve!

My guild finally got our first Sylvanas kill! If you’ve been keeping score at home, that’s three Mythic bosses before a full Heroic clear. Difficulty curves are weird.

For some reason, she decided that she’d much rather be a Banshee at the end rather than change back into her more Elvish form. So rather than an unconscious body — we got this Banshee just staring ominously at us while we looted her giant treasure chest.

I really enjoyed this fight. It was super fun to tank since there was almost always something that I needed to be doing. I even liked the chains phase — I think it helped the fight to feel big and epic in a way that the Spine of Deathwing fight tried to be, but didn’t quite nail. I don’t doubt that there’s a parallel dimension where Blizzard split up the chains and final platform phase of Sylvanas into two distinct fights, and I think we would’ve been poorer for it.

We even recovered from my co-tank disconnecting in the middle of the final phase to clinch our victory. So I’m feeling like an extra invincible bear right now.

While I try and remember I am mortal, it’s time for — the Queue!

Q4tQ, or maybe answer here. Obviously gear and Anima powers play a big role, but how do you suggest getting better at Flawless 12 runs in Torghast? Best I’ve gotten so far is like a 178 or 180. My Box of Many Things is almost complete. Thanks.

So other than just being better geared and brute-forcing your way through. Or playing one of the seriously overpowered classes — Resto Shamans of all things! There are a few things that you can do to pick up easy extra points that I do almost every run without changing my playstyle too much. First I try and go quickly, but completion is more important than time is at the end, so if you need to take more time to let your cooldowns come back before pulling a big elite pull, that’s fine. Ideally, you can pull some side packs around and still be killing things, but it’s better to have the extra power for pulls that might give you pause.

If you can find a like-minded individual around your own gear/skill level they can make Torghast a lot more fun — or five like-minded individuals! It does feel a lot easier with more people. I did all of my Flawless 12 runs as a Bear/Shadow Priest combo, and it was nice and smooth to gather things and hold them off of my friend while he did the lion’s share of the damage. But any combination of two people should be capable of having an easier time.

The easiest extra points boost that you can do is avoiding all of the traps, using the Ravenous Anima Cell on the Broker you buy it from, not choosing any Epic Anima powers, and finishing your run with more than 500 Phantasma. If you rob the third-floor Broker and leave the fifth-floor Broker alive, you should still have a Broker available in the Adamant Vaults.

Bringing extra people can make all of those points boosts tougher though. Now everyone in your party has to dodge all of the traps, and not choose any purple Anima powers. It can be helpful to make sure that you’re all on the same page if you’re choosing to not take the Purple powers. It also changes the amount of Phantasma you’d need to finish the run with to 500 per person, but it looks at it overall as far as I know. So if you had two people in your run and one person had 800, and the other had 300 you should be fine.

Getting better at using your empowerment bonus is also important. If you can do large pulls and wait a few more seconds to make sure that more of the guys will die while it’s active you can get more points that way. I find so much that I’m trying to save it for the perfect pull, and I’ll miss out on getting extra uses out of it and thus have fewer points from Empowered at the end of the run.

I’ve also been using Empowered when the floor 2 boss is mostly dead and then rushing through the portal to the third floor with it still active. It won’t time out on the third floor since there are no enemies to fight, and if there are breakables and souls to free then you’ll have a 100% empowered bonus. Does that mean anything, is it increasing my points by a large margin — who knows! I do know that I enjoy seeing the nice round number though.

But seriously though, Resto Shamans are amazingly broken in Torghast. Permanent Earth Elemental and the power that makes Healing Rain damage anyone standing in it are both extremely strong powers. Especially if you get a few stacks of the Healing Rain power. Watch your enemies melt faster than the Witch at the end of Wizard of Oz.

So, in FFXIV, I finished the MSQ and credits are playing.

QftQ: In Vanilla WoW, which raid would have had credits play after it? Onyxia, Molten Core, or Blackwing Lair?

Edit: The ARR MSQ, in case it wasn’t clear.

Blackwing Lair would’ve had the credits roll. I feel like AQ and Naxx while still being in Vanilla would each have their own smaller credits. Since they were very definitely the patch content.

I don’t feel that same way for most of the other expansions. The final raid is usually the capstone to everything. There are outliers though. For sure Black Temple would be the credits roll in Burning Crusade, and I think Battle of Dazar’alor would be the credits for Battle for Azeroth.

That is frustrating. I will however take the game automatically dropping me out of my Druid forms over the game making me manually drop the form. Nothing kills my desire to do something more than knowing that I’d have to spend part of my time shifting between forms — looking at you pulling hairs world quest in Maldraxxus.

I get it, I would 1000% not want to have to pull those hairs out by grabbing them with my mouth while in cat form, but I also have bitten worse things as a Druid. Like any of the Abominations or Plague creatures. Those must just taste so foul, I hope that there are breath mints for after the fights are over.

Mitch, Mitch, he ate the Rich.

Mitch, Mitch, he’s in service to a Lich

SEE, I HAVE TO BURN KALCHEUS’ KINGDOM DOWN

Q4tQ I know it’s more or less moot at this point, but should the various Hand mounts be usable in the Maw when mounting there has not been unlocked yet?

So from a pure gameplay stance, yeah they’re definitely Maw faction aligned things and much like the Keystone Master and Gladiator mounts — should be mountable in the Maw before you have done the Korthia unlock. Let people use more mounts there, especially since they wouldn’t look out of place is my stance.

However, I feel like from a lore/story stance they absolutely shouldn’t fit the same category as the Shadehounds. They’re the Jailers defeated foes, and even though we’ve been sneaky and freed them from their imprisonments I feel like they’d still be wary of being so bold as to run around under his watchful eye. That’s just asking to be caught again and locked up even tighter.

AND NO RIVERS AND NO REDS CAN PUT THE FIRE OUT

Dang, the last 4 or 5 times someone added me after a Hearthstone match, they were cool people, saying things like “cool deck”, “how good is it to climb”, etc. and a few of them even stayed on my friends list afterwards.

Just now, I had someone add me to call me a “noob”. It had been such a long time since that happened!! Good to see there are still a few sad toxic people out there. Brings a tear to my eye! :’)

Oh man, I don’t remember the last time I accepted a rando friend request from someone after a game of Heroes of the Storm and it wasn’t just them being a toxic jerk. I just don’t even accept random friend requests anymore. We’ve come such a long way from 2005 when I started playing Warcraft and if anyone added me I’d add them right back. Partly we don’t have to, but partly I’m just old and set in my ways now and I don’t have the energy to figure out if Rando Calrissian and Randrew Jackson are worth my time.

SEVEN DEVILS ALL AROUND JAXDADDY

I hope you all have a wonderful week! Don’t forget to leave Anna lots of questions for tomorrow, and if you’re looking for a sign to make a better than average meal and treat yourself — let this be that sign!