The Queue: What the Shadow wills 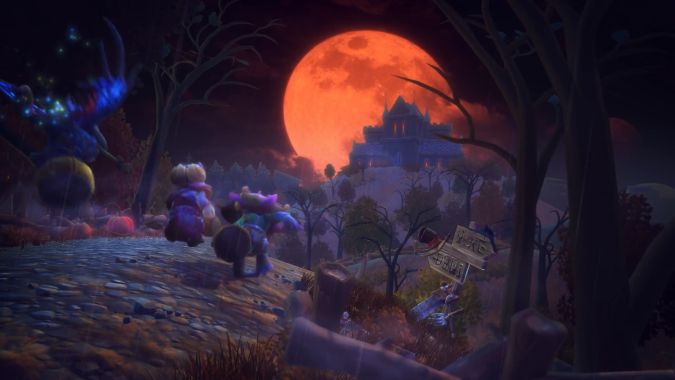 I haven’t played New World either, but I imagine all of those things are just regular growing pains a company launching their first MMO is going to go through. It’s certainly not a good thing that’s happening, but I’ve already seen the devs responding to issues as they crop up and doing their best to quell negative behavior.

Bottom line, stuff like this isn’t really what I’d put in the “cons” column for New World. If it continues for months, sure. But I feel for the devs who are in — ahem — a whole new world with this launch.

Q4tQ: So in thinking about angels in today’s Queue, if Shadowlands is where everyone goes when they die and are recycled back, or in the case of Night Elves they become fertilizer for divine beings, that would seem to mean that in WoW there really isn’t anything like heaven and eternal peace with loved ones. This seems very sad in a way. If you knew that our real life universe functioned the same way how would it change the way you live life now?

Once upon a time, it may have affected how I live my life. But nowadays — and without getting too into religious territory here — I more or less live under that assumption anyhow. I (attempt to) make the most of the life I have, I prioritize my own happiness while still doing what I can to spread positivity, and I do what I can to make sure my loved ones know that I love and appreciate them. And while none of that is the specific result of the past couple of years and pandemic life, those things have only reinforced that worldview for me.

Now, that’s obviously a very simplified version of what could be an article-length answer, but it’s still ultimately what it boils down to for me.

RETPALLYJIL IS FOCUSED ON THE OLD ELVES:

Frankly, it seems like Blizzard doesn’t even know how old they are. And y’know what? That’s fine! When you live thousands and thousands of years, I have to imagine you stop counting at a certain point. Heck, I know real-life humans who, at any given moment, are only vaguely aware of their own age.

I have to imagine we, as players, don’t actively acknowledge their exact ages because it’s never really been clear. And the parts that feel clear — Illidan’s, “TEN THOUSAND YEARS!” for instance — aren’t necessarily the law of the land. It’s easy for players to hear that number and remember it as approximately their ages — and without any sort of hammering-home on their actual ages, can you really blame people for not knowing the specifics of how old they are?

KALCHEUS ASKS ABOUT THE NEW HOTNESS:

Q4tQ: Have you given Hearthstone Mercenaries a try?

I have not, mostly because Hearthstone is one of those games that I decided a while back I just don’t have the time/money for. Also (mini-rant incoming) there was a persistent mobile bug that kinda kept ruining my experience and I just gave up after a while. It was one where the game would not recognize inputs — basically, the touch screen on my phone just stopped working in-game only — and the result was that I’d spend a couple seconds trying to move cards, minimize the game and re-open it, and then spend more time trying to move cards, hoping the screen worked. Usually I’d run out of time in my turn as a result, which is sort of like being frozen and forced to watch a timer count down to your own army’s death.

It only happened in Hearthstone, and after a while, my playtime fell to nothing. Then I came back to the game like 2-3 years later and it was still happening so I just stopped bothering.

But Mercenaries sounds interesting, and I might at least watch some streams to see if it’s my speed. It’s probably going to end up being something that piques my interest but ultimately falls under the radar, sadly.

Q4tQ: Did you pick up Metroid Dread, and if so what is your experience with it?

Follow up question: Nintendo said this is the end of the Metroid saga for Samus, and any future adventures will involve a totally different story arc. What intergalactic threat should she face next? With Dead Space on hiatus, should the next Metroid game skew towards a higher age rated space horror / action adventure?

Unfortunately, I’m able to answer that first part much more easily, since my overall Metroid experience is very limited — I’ve only played a little of Prime when I rented it from Blockbuster back in (oh goodness) 2002. Outside of that, I’ve seen Metroid runs and I know it’s a beloved series, but this is honestly my first foray into the franchise. (And Metroidvania titles in general aren’t my go-to, so it’s all fairly new for me.)

With all that in mind, I’ve been enjoying it so far. I’m not blown away by it, but it occasionally surprises me with moments where the level of detail and design work the devs put in really shines. The frustrating parts — namely, the controls and FREAKING CHOZO SOLDIERS — can be really frustrating, though. Like, frustrating to the point where the satisfaction of victory is not outweighed by the frustration of the encounter.

But that’s making it sound a lot more negative than it really is. I like the game! The sense of progression works well, and the boss fights actually remind me of the Soulsborne bosses in how they’re very mechanical. You can do a fight perfectly and make it look easy, or you can die 50 times because there’s still a pattern you’re not getting.

Unfortunately, since I don’t know the franchise well at all, I can’t really say where it should go next. I love horror, but I also don’t want Metroid fans to get a game they didn’t ask for.

FUN GAL ROXXII GETS SOME SORT OF ACHIEVEMENT FOR THIS ONE:

What does the shadow will?

It wills the following: