The Queue: Monday for real this time 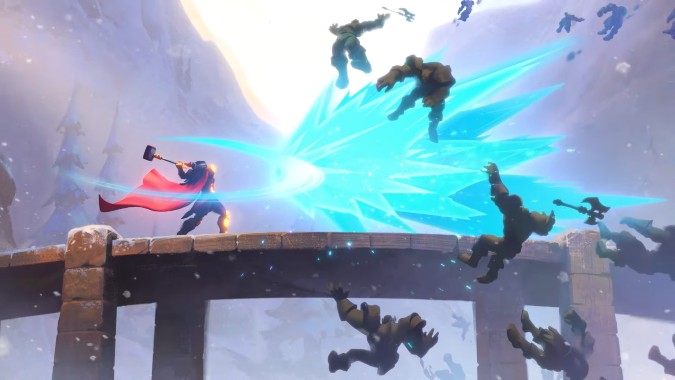 It’s Monday again. Which means here I am again too. Wasn’t that weird last week when there were two Mondays? Good thing that doesn’t happen all the time — that’d be exhausting. I’m already regular tired all the time, I don’t need double Monday tired too.

While I go get another cup of coffee, it’s time for — The Queue.

Another QftQ: What Shrek quote do you randomly say the most?
“Not the gum-drop buttons”
“You’re a monster!”
“….and in the morning, I’m making waffles!”

It’s been a long time since I saw Shrek but I definitely call people monsters all the time, and tell people that “some of them may die, but it’s a sacrifice that I’m willing to make.”

However, when I call myself a monster, that’s 100% an Arrested Development reference.

WHEN THE STORM ARRIVES WOULD YOU BE SEEN WITH SIBYLLE

Q4tQ: How do you feel about NPCs “helping” us in raids, in general?
I remember the jokes about the “kill-stealing” in Cata and Mists, and fast-forward to today when half the Sylvanas fight is “Hurry, champions! Stop Sylvanas!” and “Thrall needs our help!” I keep thinking, we’re doing all the work here, shut up xD Ok so Thrall is supposedly creating the bridges and all that, and Jaina teleports us.

I like it when they show up, they’re more closely tied to the narrative so it does make sense for them to be hanging out with us while we’re storming the castle. I like it most when they have something they do to help us survive mechanics, rather than just sit there tickling the boss. So Thrall and Jaina doing their best to build bridges in the middle of the Maw is a big plus.

Yeah, their bridges have holes in them, but you try and create bridges in super hell while being attacked by bad guys and see how you do. Is there even any ground near us for Thrall to pick up?

All that being said, what’s up with the Four Horsemen and Bolvar right before the Nine fight in Sanctum of Domination. They show up, Sylvanas twirls her mustache a little, and then they just disappear. Why aren’t they helping us with the encounter at all? Lazy Death Knights.

Q4tQ: Any rogue and/or mage experts out there? I’d really like to level these my rogue and mages, but I can’t keep them from dying. In the rogue’s case, I can kill exactly one mob and then I have to eat or drink because I’m down to 33% health. And I use that healing vial thingy a lot. My preferred spec for rogue is assassination, and I don’t really have a preference for mage. Arcane and Frost both seem to be pretty good, except for all the dying part.

Icy Veins is pretty decent for end game advice (raiding and mythic), but leveling… not so much. And I haven’t found their advice for rogues and mages really useful.

I have leveled a Mage through Shadowlands. Basically, it’s just you gotta pick your battles carefully and get creative. Don’t be too precious with your cooldowns, use those things as they’re available. Blinks and Frost Nova’s are great for making space between them and you, ideally it doesn’t take too many casts to kill something, but if they do manage to reach you your shield spell should take enough of their hits. You will still eat/drink a lot though. There’s just nothing to be done about that, unfortunately. That just means that you have some time to scroll Twitter or post in the Queue while your Mage or Rogue recuperates.

BUT STEWART TOLHURST IS NOTHING SO DIVINE

Q4tQ: Is The Waste of Time worth persevering with? I didn’t find the first episode terribly engaging and I’m not sure I have the stamina for something that obviously isn’t going to get through the source material before getting cancelled…

Well yeah, there is a ton of source material. So it’s unlikely that even if the show was a runaway monster hit that they would be able to do every book. That being said, as an Amazon Prime exclusive, they have a better chance to score a second or third season of life than they might on regular cable or one of the other streaming platforms. Just look at how Amazon Prime saved The Expanse! They also had kind of a rough first season, of course that might have more to do with it being a favorite show of Jeff Bezos than anything…

However, if you already aren’t feeling super enthused by it, there’s nothing wrong with just giving one more episode a try, or waiting for there to be more to see if public perception has swung it towards a “must watch.” I’m not acquainted with the source material, but I found myself enjoying each episode more than the one that came before it, so who knows — maybe you will too.

I imagine that there are more than a few technical issues involved with trying to do mid-fight checkpoints and selling runs issues. Are only the original group members eligible for the checkpoint, so if there’s a new person would the fight start at the beginning? Could you just get to the final checkpoint and bring in your carries so you don’t have to do the whole fight with them?

At that point, they should just split the entire fight in half like the Deathwing encounter.

I don’t mind long encounters myself. None have been as long as the original Illidan in Burning Crusade so as long as we don’t see a 20 minute Zovaal fight in patch 9.2 I’ll be ok. It lets the developers flex their muscles a bit more, like on Sylvanas they could’ve cut out p2 without changing the fight too much, but I do like the rhythm of the fight as it stands.

It’s hard to put into words exactly, but as a tank, the Sylvanas fight scratches all of the itches I have for a well-put-together tank encounter. There are adds to pick up, things to take out of the group, things to do when you’re not actively tanking in the third phase, and the tank swaps aren’t a hard “swap now or you die” so you can flex your muscles a bit to prove what a big strong invincible tank you are. I also get to use the Venthyr Door of Shadows a few times on the fight, and I feel like I get actual value out of that spell so rarely, which is nice. That cast time on it really made it not as amazing as it could’ve been.

Q4TQ: how do you prefer your encounters in RPGs: random chance with every step, enemies roaming around that only trigger a battle is you attack them or they jump you, or a mix of the two?

I don’t mind a mix of the two, but I definitely prefer seeing the monsters roaming around out and about. It makes the world feel more lived in. Although we wouldn’t have been able to see our characters in the Zubat cave back in Pokemon Red/Blue if there were as many Zubats roaming around those tunnels.

Happy Thanksgiving (American) week everyone! I hope your feasts are bountiful, your company nice, and if you’re going hunting for Black Friday sales that you find the best ones. Be good to each other and enjoy your pie for me!