How should an MMO celebrate its own anniversary? What cool things should players be able to do and earn? 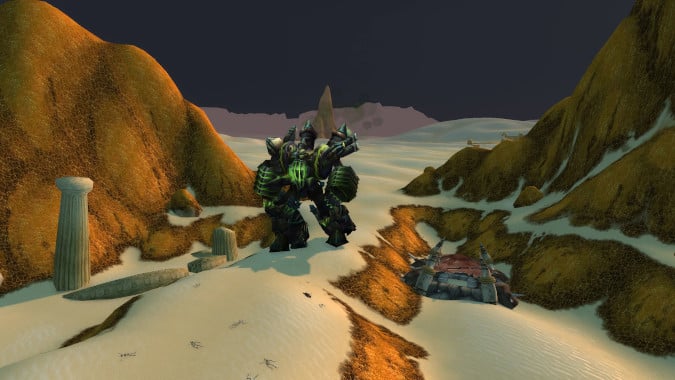 The 17th anniversary event for World of Warcraft is currently underway and will continue to be so until early December. Therese’s something new, as well as plenty brought back from previous years.

Logging in will give players 200 Timewarped Badges —and the new pet, Timeless Mechanical Dragonling costs 200 Timewarped Badges. This pet is basically free on each character you log in with. There is a new mount, Illidari Doomhawk, and a new toy, Doomwalker Trophy Stand. They are both a 100% drop chance from Doomwalker — assuming you didn’t try farming them on the first day of the anniversary event, as the mount’s chance was estimated to be closer to 1%. All of the new goodies can be obtained within a few minutes, plus the travel time to Caverns of Time, which is the longest part.

There is more going on. COT has NPCs showing off a celebration and selling more items for gold or badges. There are Chronocrystals that let players view cinematics of WoW’s history. Alterac Valley of Olde allows for the earning of more badges, and a mount for completing the achievement if this wasn’t done in a previous year. There’s a daily trivia quest for even more Timewarped Badges. And another daily to kill world bosses, that drops older, lost transmog gear. All in all, this should be a great event to come around once a year.

However, this year, the first day was marred with people frustrated that they would have to keep killing on every alt all event, with a chance that they may never receive the mount. And then the second day the event was changed to one where everything new was completed in a couple minutes.

The 10 and 15 year anniversaries were vastly different, with the LFR-style raids. These require groups, time, and an experience that will never come around again. While it makes sense that it isn’t feasible to produce something that big every year, it also really adds something to the game. Then there are other games, like Final Fantasy XIV, that has short quests, resulting in a mount, to celebrate the anniversary.

What kind of events should a game’s anniversary have? Should it be a grind, or a guaranteed drop? Should there be quests? Raids? Cinematics? What games get anniversaries right?

Blizzard Watch is made possible by people like you.
Please consider supporting our Patreon!
Filed Under: 17th Anniversary, Anniversaries, Caverns Of Time, Ffxiv, Timewarped Badges
Advertisement