The Queue: So you wanna be a healer… 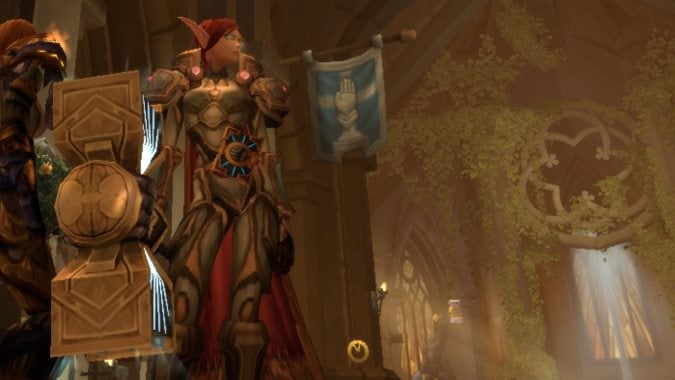 It’s not as glamorous as it sounds.

It’s a role that’s never dull, that requires constant focus, and if anyone annoys you, you can just let them die and run back without a rez. Or for those “blame the healer” parties, you can quit and let them spend another twenty minutes in the queue to get a replacement, reveling in your small, bitter victory over your critics.

Really, healing is a win all around.

Q4TLiz: What are you enjoying more progressing as a healer or melee DPS?

I don’t really care for DPS. I find it to be tedious and reliant on very strict adherence to a specific rotation. It requires perfect, precise performance to do well. I am a mediocre DPS player, and I have been trying very, very hard to be a less mediocre DPS player because my guild needs DPS and not healing.

I’ve only managed to get from “bad” to “mediocre,” though. I’ve made a lot of WeakAuras to remind me to do things, and I’ve fine-tuned them until they tell me exactly what matters without overloading me with information. I’ve read guides and followed their advice. I’ve read guides and ignored their advice. I’ve looked at logs. I’ve run sims (which have mostly given me conflicting information). I’ve tested out different builds and different trinkets and different conduits on training dummies. The build I’m sticking with now isn’t considered the best by anybody, but I seem to perform better with it.

I bought a rank 6 DPS legendary. I’ve added gems to every piece of gear I can, and then swapped out all of my gems to try new stats. I’ve upgraded my Domination Shards. I’ve maxed out Archivist’s Codex reputation to upgrade my Korthia weapon because I haven’t gotten any good weapon drops.

I’m tired. I’m frustrated. And I’m still not a particularly good DPS. I’m not good at the quick, precise execution of a rotation that’s required to be good, and it’s entirely possible that my guild would do better if I bailed on raid nights, because having an extra person adds to boss health, and I don’t know if I contribute enough to counterbalance it. I don’t feel like I contribute enough. I certainly don’t contribute as much as I would as a healer.

I think I’m a good healer. Healing isn’t about executing a precise rotation. It’s about responding to ever-changing situations as they evolve. It’s important to respond quickly, but there’s no single right answer, no specific rotation to execute. The right answer will vary depending on who’s taking damage, how much damage they’re taking, and even where they are on the battlefield. A few scattered people here and there? Top them off with a Holy Shock. Sudden spike of damage on the tank? Lay on Hands. Big burst of raid damage? Avenging Wrath into Divine Toll into Light of Dawn then Holy Shock to cast a second Light of Dawn. But those aren’t always the right answers. Maybe the raid isn’t positioned well, of I’m not positioned well for Light of Dawn healing, because it’s a frontal cone. I might use Devotion Aura to slow down oncoming damage while I repositioned to do Light of Dawn, or I might fill with Flash of Light. It all depends on what the situation is right now, and while every fight has its patterns, they’re never the same twice.

Healing a fight is never the same; it is full of variation and requires constant attention. I feel good playing a healer because I’m a pretty good healer.

Alternatively, I feel bad playing a DPS because I’m not a very good DPS. I suppose the mental challenge of finding the right rotation, the right talents, the right gear, the right stats has been interesting, and I can continue to iterate on it. I can keep practicing the rotation and keep practicing more complicated rotations. But I’m not good at the kind of unerring precision that’s a must for DPSers. I can practice my way to competence, and I think I’ve managed that. But I don’t think I’m going to be good at it, and I don’t really enjoy it.

Also being in melee is terrible, but Holy Paladins need to be in melee nearly as much as Retribution Paladins, so that part isn’t much of a change.

So I guess to answer your question, healer.

We’ve been setting up for an Arthas narrative since before Shadowlands was even released, when we saw Uther and Devos grab Arthas’ soul and throw it into the Maw.

I’m positive we’re going to revisit this in some way. It’s going to be key to resolving Uther’s narrative this expansion.

How we might see Arthas, or if he’s even recognizable as Arthas anymore, I don’t know. But I’m curious to find out because I don’t think Uther can just walk away from what he did.

just logged in since monday in hearth. why do i got 15 merc and av packs and the tavern pass? was that part of the 6 month sub?

To echo Red, yes. (And you’ll find you have Battlegrounds Perks, too.) This was part of the last round of perks for 6-month WoW subscribers. So if you’re a subscriber and you have any interest in Hearthstone, you should log on to collect your packs.

What new minion types would you add for Hearthstone Battlegrounds?

Since they’ve got the Alterac Valley thing going, I was hoping to see Orcs and Dwarves, but I haven’t heard anything about new types coming in. >_< I’d also like to see Old God Minions, because yes, and Elves, because there are at least five different types of elves on Azeroth so they’d have plenty to work with.

Racial minion types seem like they could be neat, but they do use racial minion types in Hearthstone Mercenaries, and it feels pretty weird. For example, Anduin (a human) has a heal that will only heal other humans and a buff that will only buff other Humans. Have any elves in your party? No go. Tauren, Trolls, Gnomes, Dwarves, Undead? No, no, no, no, and no. Maybe it’s just me, but there is an off-putting sense of racism in this design. It frames the whole thing in an “us vs. them” style where there’s no cooperation, no working together, no hope of compromise — it humans against the other, even refusing to help races that are narratively their allies.

I know I’m reading a lot into a game that essentially has no story, but to me this gives off a very weird, very unfriendly vibe. (And from a game design standpoint, many of these racial synergies don’t work because there simply aren’t enough appropriate types of mercs to synergize with. Humans and Orcs are about all there is, even though there are many other races.)

So if we were adding something Alterac Valley-esque to Battlegrounds, I would go with Alliance and Horde, or Frostwolf and Stormpike. It would fit perfectly in the expansion theme but would side-step the awkward racial implications of having things like an Anduin who will only buff humans. Sure, there’s still a racial element to those factions, but having them broader than a single race shows camaraderie between races rather than antagonism, and I think that just feels better.

One minion type that I think would be fun — though it does sort of overlap with some others — would be a Steamwheedle Cartel or Gadgetzan warband. Whether it went with Hearthstone’s take on Gadgetzan or stuck with more of the Warcraft version of the Steamwheedle Cartel, it could have lots of cool mad science stuff, with a bit of a criminal underbelly. I think those could become some really interesting cards.

Would it have been in the jailer’s best interest to let the Burning Legion steam roll over Azeroth and rest of the universe?

It seems like murdering as much of Azeroth as possible in order to deliver souls to the Jailer was kind of the whole reason for Teldrassil, it does seem like just letting the Burning Legion destroy the place would have done just as well. And, heck, it takes nothing to send the Horde and Alliance into war, so it seems like there are potentially tons of very easy ways to supercharge the Jailer with power.

But, frankly, I understand like 50% of WoW lore so perhaps there’s a reason this wouldn’t work. Perhaps the Jailer needed a bunch of souls all at once, faster than the Burning Legion or our usual wars wouldn’t provide.

So here we are, down one World Tree.

Hello fellow human, do you also like to perform human activities such as fueling your cells with an oxydizing substance and consuming various biomasses?

And that’s all for now, friends. I hope you’ve had a good day and a good weekend to come — and you’re all going to join me for our D&D stream tomorrow afternoon, right? I may need moral support if Joe and Matt continue to wreck any semblance of plan I may have.

But regardless, I’ll see you back here next week. In the meantime, take care of yourself, hug your loved ones, and pet your dogs, cats, and other friendly creatures.