The Queue: One step closer to Demolition Man 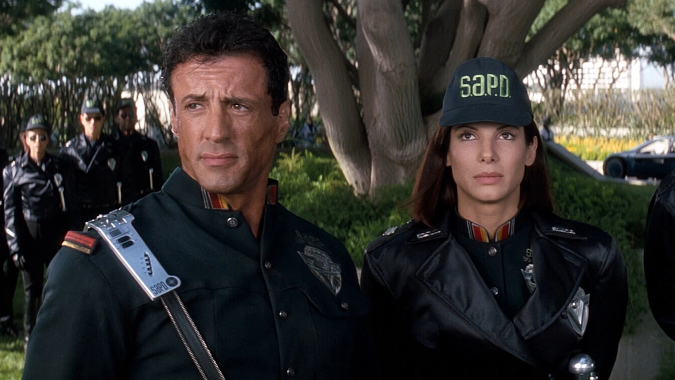 Demolition Man suffers from the same self-satisfied smugness that a lot of 90’s era satirical comedy does.  It posits the radical idea that gasp people in the future will be different and act differently! And they might thing swearing in public or eating meat is bad so really they’re going to be complete wimps who can’t stop one guy from running amok. It even has Dennis Leary in it as a brave freedom fighter holding out against the tyranny of social politeness gone too far. So in that regard, it fails pretty hard at predicting where we were heading as a country.

But the San Angeles of the movie’s 2032 — a mega-city consisting of Los Angeles, Santa Barbara, and San Diego all smushed together — does have some cool satirical moments. One is that, in the future, every restaurant is Taco Bell — not that every restaurant serves Taco Bell’s brand of ‘Mexican’ food, and yes the italics are on purpose, but that every restaurant from the quirky breakfast diner down the street to the fanciest French-Hawaiian fusion bistro are all owned and operated by Taco Bell. There is but one restaurant conglomerate in 2032, and it’s Taco Bell.

I can’t stop thinking about this in the wake of Microsoft’s planned acquisition of Activision Blizzard. By 2032, everything might be owned by Amazoisneysoftoogle. Or, heck, maybe Taco Bell? Who knows anymore?

Q4tQ what do we think the MS acquisition will mean to those of us who
have played Blizzard games on non-Microsoft platforms? Overwatch was
the first of their games not to be released on MacOS, and no new games
have been released in MacOS since then. What is it going to do for
games on PlayStation or Nintendo Switch for future releases.

The short answer is nothing new until summer of 2023.

The longer answer is more complicated, but it boils down to two things — one, Microsoft isn’t as big on console exclusivity, or even platform exclusivity, as other companies are, and furthermore, any games currently in the dev pipeline may already have contractual obligations that require them to release on other, non Xbox systems.

I’ll use the example of The Outer Worlds and the still unreleased sequel. When Microsoft bought Obsidian, they didn’t get to make The Outer Worlds an Xbox exclusive, because Obsidian had already negotiated and signed contracts to publish the game for multiple platforms. However, now that Microsoft owns Obsidian, The Outer Worlds 2 is going to be an Xbox/PC exclusive. So it’s not going to be on Switch or Playstation at launch, but it will hit PC the same time it hits the Xbox, which is more open than Sony is with it’s exclusives.

We’ll have to wait and see about Microsoft’s version of Blizzard and how it approaches console exclusivity, but I do think it’s likely that Microsoft is going to leverage Activision Blizzard game titles for both PC and Xbox Game Pass. As for Mac… while I’m sad to say it, I don’t think any future Blizzard games will be released for the OS, because most people will just play them via Boot Camp or some other emulator. And as Joe Perez mentioned, with cloud gaming, you can already play your Xbox games on a Mac, so it’s possible that we’ll see something similar for Blizzard games.

so… did the MSActiBlizz thing actually happen, or is it a thing MS is trying to do?

If by ‘actually happen’ you mean ‘did I hallucinate/dream this’ then no, you did not, there really was a big press release on Microsoft’s part announcing that they will be acquiring Activision Blizzard.

If by ‘actually happen’ you mean ‘is already a done deal’ then no. It takes time for companies this large to make these kind of deals. There’s antitrust legislation that will need to be navigated, expansive negotiation on terms, legal gymnastics on a scale most of us have never imagined.

To put it in perspective, this deal is the financial equivalent of buying seventeen Lucasfilms. Disney spent a little over four billion to acquire Lucasfilm in 2012, whereas Microsoft is spending 68 billion and change to pick up Activision. You do not spend 68 billion dollars the way you spend 68 bucks — nothing is going to be finalized without a lot of lawyers, accountants and negotiations.

So it’s less that it happened, and more that it is happening and will be happening for over a year and a half.

Do you think Microsoft will force Blizzard to make offline modes for games? Because Diablo 3 suffered enormously from always online requirement. Hardcore mode was basically unplayable.

Check back in 2023, but my money is on no. Always online games are always online first and foremost as an anti-piracy feature, not because of online multiplayer or any other feature like it.

Microsoft is very focused on Game Pass, so it doesn’t feel to me like they’re moving away from always online.

Q4tQ: How crazy would it be if Microsoft actually bought Activision/Blizzard?

Seriously, in the future all games will be made by Taco Bell.

Okay, that’s the Queue for this Wednesday. I’m Matt, and hopefully if Amazon buys Ubisoft tomorrow it’ll be announced after I get some breakfast.

Blizzard Watch is made possible by people like you.
Please consider supporting our Patreon!
Filed Under: No I Don’t Know How The Three Seashells Work
Advertisement