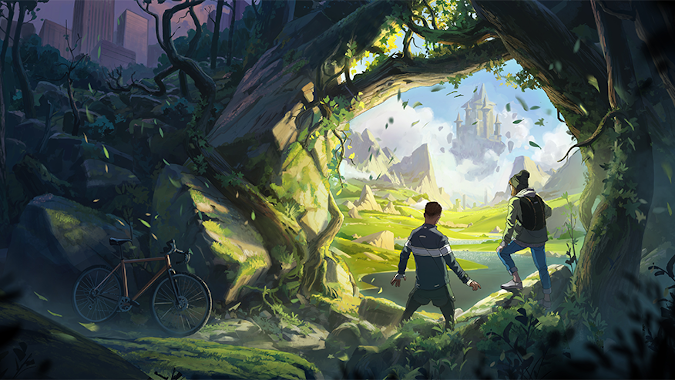 Blizzard published a post inviting applicants to explore positions for a variety of roles to develop a new game, a new entry in the survival genre, in a new universe their players are yet to explore. The post features some art to illustrate the concept a little — modern teenagers stand with a bike before what seems to be a portal into a new world with a shining, floating city to contrast against their own dark one in one image. Another art piece within the post features a person with an animal skull headpiece and a fur around their neck, studying some luminescent footprints. Since we know almost nothing more at this point, it’s possible these are just kind of generic placeholder images, but it could be inferred that this means we’ll be in a relatively naturalistic world with a few magic elements in this new universe, possibly tracking prey.

The survival genre is generally characterized by a hostile world — made so by natural conditions, wildlife, and even occasionally zombies — where the player survives by crafting what they need from materials they’ve gathered, especially the weapons and tools they need to live another day. Most games in the genre have some element of eating or drinking periodically to keep your character alive or healthy. Many include a mechanic where you carve out your own space in the world, whether bases created by the player, bases systematically expanded with preset rooms, or just found spaces where the player can drop their items and rest a moment. Survival games tend to have a lot in common with roguelikes — the player is frequently unsure of their location when a run begins, loot is placed somewhat randomly, and sometimes there are even procedurally generated maps. Some, like Valheim, allow you to play with friends, while others like Subnautica are completely solo.

The genre has a very high replay value, especially for games featuring a hardcore-style mode, where death means starting over. The games in these genres tend to have extremely devoted followings, as you may have been able to glean from my repeated posts about The Long Dark. It makes sense for Blizzard to expand into this genre, especially since nearly all the modern standout titles originated at small indie studios even if they were bought out by a larger studio later, like Minecraft. Even if I weren’t excited both on account of Blizzard and a genre I adore, it would be really interesting to see the trajectory of development here compared to the current games on offer in the genre.

If nothing else, I’m hoping for a cameo appearance from everyone’s favorite Warchief, A Basic Campfire — even if it’s just a headcanon I adopt while trying to boil potable water.

Blizzard Watch is made possible by people like you.
Please consider supporting our Patreon!
Filed Under: Blizzard Games, New Games, Survival Game
Advertisement