A look back at Horizon Zero Dawn and Ted Faro, the man who saved the world 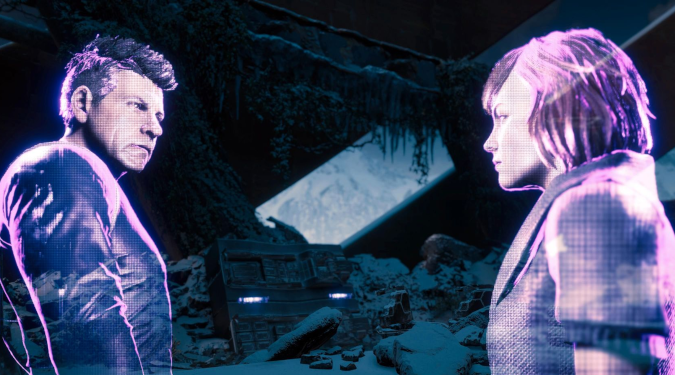 Horizon Zero Dawn is full of villainous characters. There’s HADES, the sinister AI who seeks to annihilate all life on the 31st century Earth the game is set on, and Sylens, the sinister and not very forthcoming mystery who aids Aloy for reasons of his own. Either would be quite compelling as the game’s final bad guy, but neither of them are the real villain of the story. No, the villain of Zero Dawn isn’t a malevolent AI or a man who cares more about knowledge than people. The villain isn’t even the army of killer robots that will swarm the world and seek to destroy everything in it.

No, the real villain of Horizon Zero Dawn is already a thousand years dead when the game starts, and he doesn’t take any action during the events of the game at all. His villainy is mundane, venal, and motivated by a desire to leave his mark on the world.

And yet the entire world we experience in Horizon Zero Dawn and will likely experience in its sequel, Horizon Forbidden West, which comes out in February, is his fault. The fall of the old world, the destruction of human civilization, and even the failure of the people of Aloy’s time to know who they are and where they come from all stems from the actions of this one man. Ted Faro was a man who confused intelligence for wisdom and wealth for morality. He rose to the highest position of influence and power possible in his time… only to lose everything, for everyone.

The true villain of Horizon Zero Dawn is a man named Ted Faro, and his corporation, Faro Automated Solutions. Ted Faro destroyed the world… but to get to the point where he could destroy the world, he would have to save it. 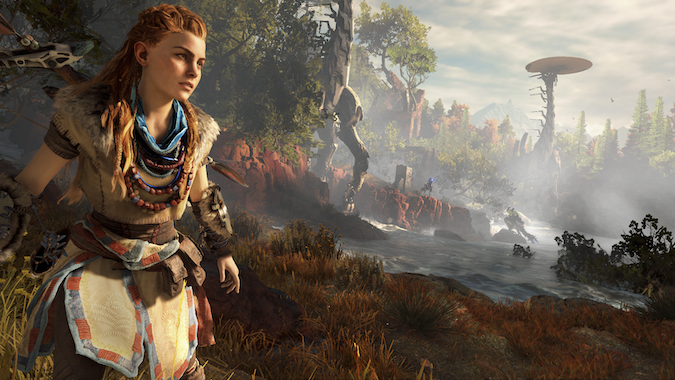 Ted Faro was born on Christmas Eve, 2013. He wasn’t particular exceptional as a child, living in Salt Lake City, his birthplace. He went to college, studied business, then dropped out to start up Faro Automated Solutions (FAS). The business wasn’t an immediate success — tech giants weren’t exactly thin on the ground in the 2030’s. But over time Faro’s business acumen and savvy understanding of the changing marketplace earned his company small fortunes, especially when he introduced the world to the Focus, a small head-mounted combination of a smart phone and augmented reality glasses. FAS also had a line of popular personal use robots, serving as assistants or bodyguards.

It should be noted that Ted Faro didn’t invent these things. He was a financial wizard, not a scientist or engineer — but he had big ideas and hired people people who could turn them into reality. He never actually did the work of creating the automatons he envisioned. So while it’s fair to call him a genius, the kind of genius he was wasn’t the kind that could really understand all the things he wanted to achieve.

Still, in the 2040’s, FAS went from a successful business to a household name when Ted Faro realized there was money to be made in solving the emerging ecological disaster that was pushing the world towards the brink of global war over scarce resources and living space. Flooding and climate disasters had rendered tens of millions of people homeless, sometimes even stateless as whole countries ended up under water or otherwise unlivable. And so Ted hired Dr. Elizabet Sobeck, who possessed all the technical skill and inventive prowess he lacked. 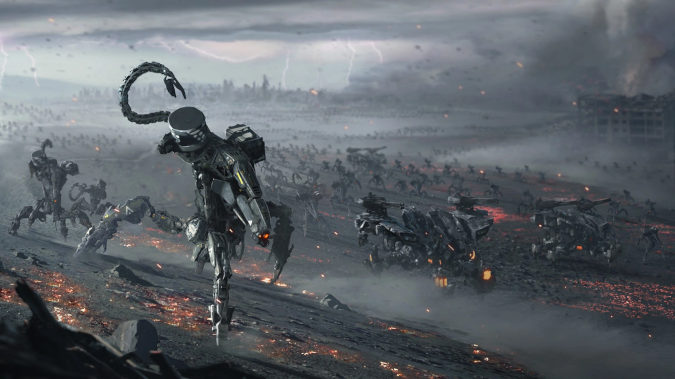 Sobek, fresh out of grad school, soon created a whole host of “green robots” for FAS — machines that were capable of running off of power sources that would reduce, not contribute to, the world’s greenhousing. These inventions changed the world, and Faro’s company became the world leader in environmentally-friendly tech solutions. This success led Faro into another big environmental project: Project Firebreak, a top secret government program to stabilize the Yellowstone supervolcano and prevent it from erupting. And stabilize it they did, with the help of a host of Sobek’s green robots  who could tap into the geothermal fury of the half-awake volcano and use that power to fuel themselves as they worked to create “firebreak” installations. This required the development of sophisticated AIs to help run such massive environmental projects, and FAS was right there at the forefront.

By 2048, Faro was famous, wealthy, and influential — he was personally credited with all of his company’s successes, and was even called “The Man who Saved the World” by the press and internet pundits. But Faro wanted more — more fame, more accolades, more wealth. And so he seized on the emerging military automaton market, where all of the robotic and AI technology FAS had been developing could turn into highly-profitable smart defense systems. The climate conflicts of the late 2030’s and early 2040’s had shown Faro that the future of armed conflict was machines killing other machines, and any poor humans unfortunate enough to be from a nation that couldn’t afford machines. He chose to take FAS into the military sector, and Elizabet Sobeck resigned in protest — she was fine with Faro taking all the credit for her work when it was saving the world, but not with turning her designs into killing machines

Still, even without Elizabet and her brilliant mind, FAS made money hand over fist for the next decade. By the mid 2050’s, Ted Faro was the world’s first trillionaire, a man so wealthy he could almost be considered an independent nation. And this is when he launched his baby: the Chariot line of military automatons. This was to be FAS’s crowning achievement. In-between suing Elizabet Sobeck over things like patents and whether her new environmental robot company infringed on FAS’s environmental robot line — which she’d basically invented — and making celebrity appearances, Faro conceived the idea of a practically unbeatable mechanical army. This new type of automaton could hack and take over enemy robots, but was itself so heavily encrypted that it would take an AI hundreds of years to crack, with no back doors for enemies to exploit. This robotic army could  repair itself and even build new robots — think of it as a combination of a robot carrier, battleship, super-tank, and mobile base, which could use a variety of power sources to keep going, so it never had to return for refueling before its task was done.

And best of all, one of those power sources was a biomatter fuel conversion. It could take in biological material — like plants, animals, fungi — and convert it to fuel. This would be the ultimate military machine, capable of operating independently until its mission was done. 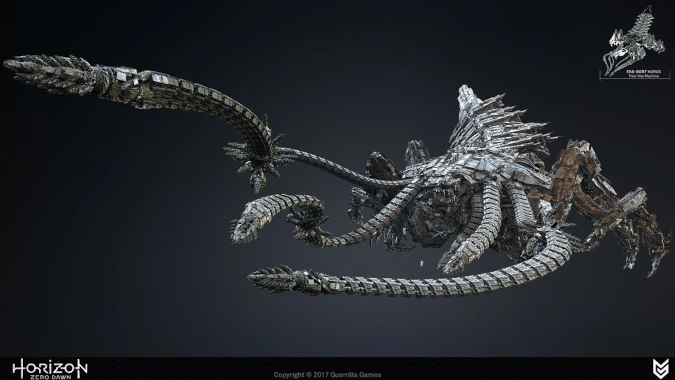 The end was inevitable

As you might expect, nobody left at FAS was brave enough to tell Faro no when he came up with this plan. Elizabet Sobek, who viewed military robots with disdain, would likely have told Faro that creating an army of robot murder machines that could operate indefinitely without returning to base, could create more of themselves from massive, almost unassailable carrier platforms, could hack and control any opposition machines sent against them and which could sustain themselves on biological material — in other words, living things like humans, and all the things humans need to eat to live — was a terrible idea. But there was no one to say no, and so FAS worked on developing and building these all-powerful machines.

But it was a few years before the Glitch happened.

In 2064, some Faro robots became unresponsive to outside commands, and rather than execute their orders, began simply destroying everything they came into contact with. Faro ordered his engineers to regain control of the robotic swarm, only to be reminded that he’d instructed them not to leave any back doors into the system. And worse, the out of control units included a Horus, which able to replicate more robots. The swarm was ignoring its human masters and it was growing.

This was called the Glitch, and Ted realized it was bad when reports of Faro robots consuming people and livestock started circulating in the media. Soon, the robots were being called The Faro Plague, and the Man who Saved the World was humiliated. Humiliated enough, even, to swallow his pride and contact Dr. Sobeck, asking if she could fix this, which was when someone finally told Ted Faro how colossally bad his mistake in judgement had been. There was no way to access the rampaging Faro robots, no way to bring them under control, and no way to stop them. They were created to be unhackable, and it would take the most sophisticated AIs in the world hundreds of years to crack their encryption.

Meanwhile, after the Glitch was spreading throughout all the Faro machines in operation, they were hacking competitors’ war robots and adding them to their host, as well as building new ones. All attempts to cut their power and deactivate them failed, because they would simply adapt and find new ways to fuel themselves. They were built to be unstoppable.

As Ted Faro stood aghast, Elizabet told him the blunt truth — he had created an army of killer robots, and it was going to destroy all life on Earth in less than 18 months.

In Horizon Zero Dawn, you only meet Ted Faro in audio logs and pre-recored holographic projections. For most of the game, you don’t even know his name. But the results of his actions are everywhere you look.

With Horizon Forbidden West coming out soon, we’re going to be talking more about the backstory going into the game. Stay tuned for more about Elizabet Sobeck and her radical — some would say horrifying — solution to the Faro Plague, which she called Project Zero Dawn.